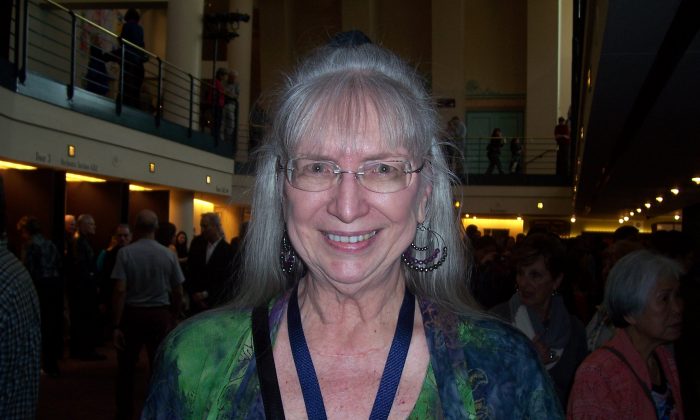 This is the sixth year Shen Yun has come to the Mile-High City and two of the weekend’s performances were completely sold out, the other two had very full houses.

Using dance and music, Shen Yun brings audiences on a tour through the highlights of 5,000 years of Chinese culture and history.

“It is absolutely stunning; it is so exquisite,” said Donna Hoff, a retired accountant who was back to watch a third performance on March 8, 2015.

She said the beauty in the performances heartens her.

“My heart is warmed watching it. It’s so beautiful … The beauty of it really moves me.”

The music and costumes impressed Mary Beall, a retired jewelry designer who also saw the Sunday performance. She was moved by the solo performance on a traditional Chinese instrument called the erhu.

“The highlight for me was the two-stringed instrument. … I just thought that was stunning,” she said after the show.

Known as the Chinese violin, the erhu is one of the most expressive of traditional instruments. It is able to mimic the sound of birds and animals, and even the human voice.

“It goes right to your heart,” Mrs. Beall said.

She and her husband, Kevin Beall, also thought the hundreds of hand-made, brightly colored costumes inspired by the fashions of different dynasties and eras, were unique and added cultural depth to the performance.

“All the costumes were very intricate,” he said.

“They stood out from Western culture because … the colors [were] put together in a unique way.

“The details were phenomenal,” she said.

“The different patterns in [the] fabrics put together, were beautiful.”

She particularly liked the phoenix costumes worn by female dancers.

“Because of the juxtaposition of the color, you had the blue and the white… and when they opened their backs, they looked like butterflies…. I thought that was beautiful,” she said.

Mrs. Beall said the way the dancers moved was also a very cultural experience, and she was especially impressed with the male dancers.

Some Shen Yun backgrounds also echo lines of poetry and some set the stage in realms of paradise.

According to the Shen Yun website, the backdrops are “magical windows to completely different realms” created to “complement and synchronize all aspects of the performance.”

DeJaynes Phyllis, a manager with the Colorado Parks and Wildlife was impressed with the visual appeal.

“It’s so visually beautiful … Everything was brought together so well [with] the video behind the dancers,” she said after the Sunday performance.

April Henderson, a community life director at a retirement home, who came with 20 residents, said the background made the performance feel majestic.

“The screen projections are wonderful to help create an atmosphere for the audience,” she said after the Sunday, March 8 performance.

Reynald Clemons, who works in finance in Denver, appreciated the way the background and the costumes enhanced each other.

“I’m impressed with the way that their costumes mirror the nature … in the background, that was very enlightening to me,” he said during intermission at the performance Friday, March 6.

“That was moving … and it was inspiring as well,” Mr. Clemmons said.

He said the performance helped him become aware of difficulties the Chinese Mainlanders face.

“When you grow up in a free society, as we are in the States, you often don’t know how limited other cultures are in terms of what they can and can’t do.”

The mission of Shen Yun is to revive traditional Chinese culture, which took its essence from the teachings of Confucianism, Buddhism, and Taoism, and emphasized values like loyalty, compassion, benevolence, and courage, according to the Shen Yun website.

These traditional values have been dealt a heavy blow under communism.

“Forcing atheism upon society, the Chinese Communist Party has for decades launched various campaigns—most notably the Cultural Revolution—to destroy not only cultural sites, temples, and relics, but also the Chinese people’s belief in virtue and faith in the divine,” the Shen Yun website explains.

In 2006, a group of leading classical Chinese artists came together in New York with one wish: to revive the true, divinely inspired culture of China and share it with the world.

Shen Yun performances include dances that tell stories of the courage and kindness of practitioners of the meditation discipline Falun Dafa, in the face of persecution that continues to this day in China.

Faline Connelly, a vet technician, saw the Saturday, March 7 matinee and spoke about the opening piece and a modern day piece The Power of Compassion, which is based on a story of Falun Dafa practitioners who helped a policeman, injured while trying to arrest them.

Ms. Connelly felt inspired and said the performance gave her “more appreciation for the Chinese culture.”

Robert Butler, who works in auto sales, said he found the performance very worthwhile and it gave him a “great understanding” of Chinese culture and how when “you lose your culture, you have nothing to stand on, so it’s very important to we keep our culture.”

“It just enriches your soul and your understanding  … ,” he said after the final Denver performance.