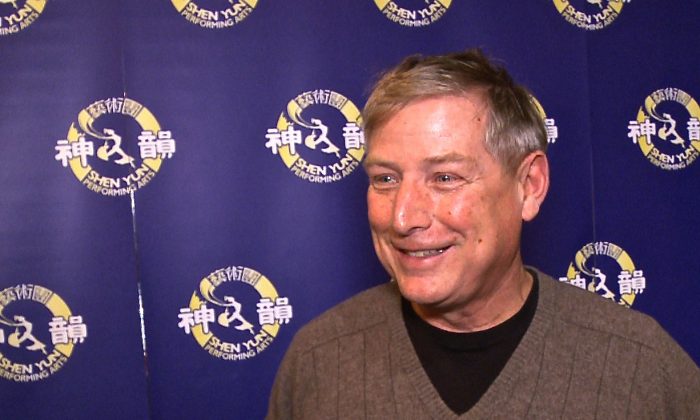 Robert Stearns, who lives and works in Mongolia, was delighted to see a Mongolian dance of welcome as part of the Shen Yun Performing Arts presentation at Ottawa’s National Arts Centre on Jan. 2, 2015. (NTD Television)
Company

OTTAWA, Canada—Robert Stearns lives and works in Mongolia, so he was delighted to see a Mongolian dance of welcome as part of the Shen Yun Performing Arts presentation at Ottawa’s National Arts Centre on Jan. 2.

“It’s a magnificent show, and also because we’re living in Mongolia, it’s interesting for us to see the resemblances, especially the Mongolian dance and what we’re used to seeing in Mongolia,” said Mr. Stearns, the director of the International School of Ulaanbaatar, a private school in Mongolia.

“The part of Mongolia that we live in … we do see the kind of dancing that was shown and of course the backdrop, yes, with the horse-shoulder movements. We also saw that in the Tibetan dance as well.

“And the backdrop with the gers, of course. We’ve lived in gers as well.”

For the story-based pieces, Shen Yun’s enormous digital backdrop becomes animated and interacts with the dancers in order to help tell the story being played out on stage. It’s something new in the world of dance, pioneered by Shen Yun, and depends on split-second timing by the dancers.

“We loved the dancing and the way the backdrop and the foreground all blend together,” said Mr. Stearns.

Shen Yun came into being in 2006 when a group of leading classical Chinese artists came together in New York with one wish: to revive the true, divinely inspired culture of China and share it with the world.

The group has done just that, putting on an all-new show every season.

As part of its 2015 world tour, Shen Yun will perform in over 100 cities on five continents, gracing some of the world’s most prestigious stages such as New York’s Lincoln Center, Washington D.C.’s Kennedy Center, and Paris’s Palais des Congrès de Paris.