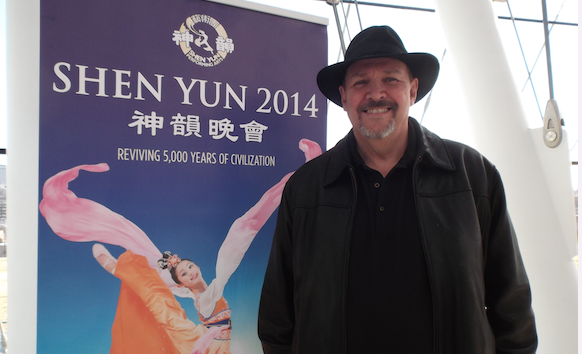 Shen Yun: ‘A Lot of Discipline in These Dancers’ Says Author

Shen Yun Performing Arts has four touring companies that tour the globe simultaneously, captivating theatergoers in 20 countries and over 100 cities with its classical Chinese dances, orchestral music, and beautiful scenery.

Shen Yun’s mission is to revitalize traditional Chinese culture through the performing arts.

Mr. Kieser has been a professional writer for 30 years. Besides authoring many magazine and newspaper articles, Kieser is most well-known for such novels as “Ride the Trail of Death,” “Black Moon’s Revenge,” and “Missouri’s Great Flood of ’93.”

Mr. Kieser commented, “It was fun to watch the culture, a different culture than we have here, and watching their dance through the centuries. In a way, it’s sad too, because you realize that all these generations are gone now that did this beautiful dance, and that kind of affected me that way.”

Mr. Kieser felt the dancers exhibited a lot of control and discipline. He mentioned, “A lot of discipline in these dancers. They’re beautiful, and the costumes of course, and the colors are pretty amazing too.”

While classical Chinese dance is at the core of its program, Shen Yun also showcases elegant handmade costuming, digital interactive backdrops and a full-orchestra featuring both Eastern and Western Instrumentation, as well as several solo vocalists.

I enjoyed the music as well,” Mr. Kieser said. “I did find [the blend of Eastern and Western instruments] fascinating. Really, we don’t hear a lot of that around here, you know, so to me, it’s something totally different, and I liked that.”

Mr. Kieser mentioned he definitely learned something from the performance. “I got a little bit of a feel for the dance throughout the centuries, and this is the first time I had a chance to see that,” he said.

“And certainly the precision, anyone who has an eye for art would love that, and certainly when we come back next year to see it we’ll bring some family,” Mr. Kieser explained.