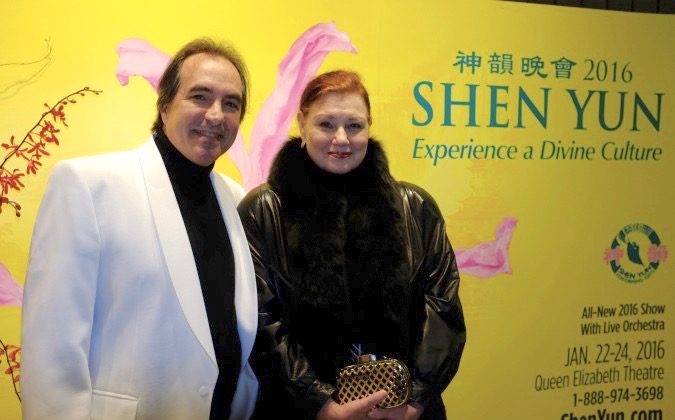 VANCOUVER, Canada—In his own words, the evening of Saturday, Jan. 23, was one of the greatest artistic nights in the life of 56-year old Tyrone Polanski, an actor and independent film director.

On that evening, Polanski and Dianne Dennis, a movie producer, were among the enthusiastic audience attending Shen Yun Performing Arts at the Queen Elizabeth Theatre.

“It was mesmerizing to see that kind of talent, encompassed in two hours, the music, the dancing, the visuals, the screen (animated backdrops), the way they combined the screen with the actors and the way they merged,” Mr. Polanski said.

“These people are magnificent. … I will never forget tonight as long as I live.”

Every element in the performance was a feat worth high praise from Mr. Polanski, from the timing in the dance performances to the vocal performances by Shen Yun’s award-winning vocalists who sing classical Chinese text using the bel canto technique.

“The soprano (Min Jiang) was just awesome. I said to myself, she can’t really be singing, it was like a voice from God,” Mr. Polanski said.

“I’m just so uplifted from tonight’s experience, and I can’t wait till next year already.”

The performance was also a chance for Mr. Polanski to learn more about China’s history and culture. Based in New York, Shen Yun is a classical Chinese dance and music company that has a mission to revive China’s divinely inspired culture. The company was formed by a group of classical Chinese artists in 2006.

These people are magnificent. … I will never forget tonight as long as I live.
— Tyrone Polanski, actor and independent film director

“I learned a lot, that’s another thing, on top of being entertaining, it was educational,” Mr. Polanski said.

“I was educated, I was entertained, and I was mesmerized, and spiritually uplifted.”

Spirituality has a strong presence in China’s ancient culture. According to the Shen Yun website, the essence of traditional Chinese culture is based on principles such as benevolence and justice, respect for the heavens, and divine retribution—ideals all originating from Confucianism, Buddhism, and Daoism.

Shen Yun, Mr. Polanski said, awakened his spirit and left him with an overwhelming uplifted feeling.

“It was like … a gift from God, these people are fantastic.”

Ms. Dennis said she was also charmed by the performance.

“I was mesmerized by the beauty of the costumes, the choreography was bang on, the dancers knew what they were doing, and they didn’t miss,” she said.

“I was sitting on the edge of my seat, wondering what was going to happen next, because all of these stories were different, the costumes were different, and I felt like I just got here, and it was over, like there was never a dull moment in the program.”

The movie producer said she was also impressed by Shen Yun’s use of animated backdrops and the way the scenes interacted with the dancers on stage.

“I can’t say enough good things about this, it was just incredible.”