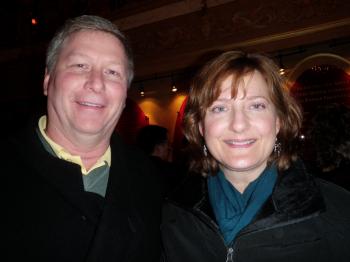 By Epoch Times Staff
Print
DETROIT—“It was fabulous. I can’t believe how beautiful it is,” said Marlene Jenkins who had come to watch Shen Yun Performing Arts with Tod Jenkins and two companions. They had been enjoying the Saturday matinee performance presented at the Detroit Opera House on Jan. 22.

“The colors, the choreography, the back drop, the use of the screens in the back—it added depth to the whole production,” she said.

She mentioned that none of the dancers looked tired. "They all danced as one. It was just a fabulous presentation. I’m so glad we came to see it,” Ms. Jenkins said.

Shen Yun specializes in presenting both the ethnic and folk dances of China as well as classical Chinese dance. The latter form is so expression that Shen Yun uses it to tell stories of China's virtues, ancient and modern.

The story lines of the dances were very interesting, Ms Jenkins said, and she ended up learning a lot about Chinese culture and history that she hadn't previously known.

The dance Little Mischievious Monks was enjoyable and just amazing to watch, she said.

“The colors are fabulous and they make it look so easy when they’re dancing-but you know it’s extremely hard.”

“I was sorry to hear they couldn't perform it in China,” she said pointing out that it was interesting that the Chinese were unable to watch Shen Yun while Americans could. “But I’m really glad they decided to stop in Detroit.”

Part of Shen Yun's mission is to restore the traditional Chinese performing arts after being mostly destroyed by the 60-plus years of communist rule.