Shen Yun a Celebration of Beauty, Culture, Light, and Spirituality 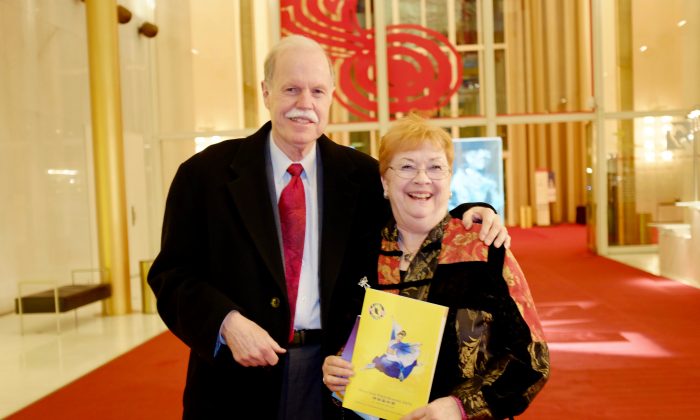 It was a great way to share the wonderful traditional culture of the Chinese people “without intimidating people or beating them over the head with the message,” said Mrs. Nail who was accompanied to Kennedy Center Opera House on Feb. 18 by her husband, Michael.

“It’s a beautiful celebration of beauty, and culture, and light, and spirituality,” Mr. Nail said.

In 1999, the Chinese Communist Party began a systematic campaign to eliminate the faith of Falun Dafa practitioners, who uphold traditional Chinese ideals of truthfulness, compassion, and tolerance. This persecution continues today.

The Nails had met a young woman four or five years who told them about the persecution of Falun Dafa and also about Shen Yun. “Ever since then I knew I had to come,” Mrs. Nail said. “It was just wonderful, it was beautiful.”

Shen Yun’s dances about Falun Dafa are just one example of how the New York-based company incorporates the heart of traditional Chinese beliefs—that humankind is inseparably bound to the divine—into its program.

“I think it shows that the human spirit cannot be enchained by any dogma, any philosophy, that our nature is to be free and to express our god given attributes in this life,” said Mr. Nail, the president/CEO of Enlightened Enterprises, Inc.

The couple are spiritually inclined, Mrs. Nail said, and believes that our time on earth is meant to fulfill a spiritual mission.

Mrs. Nail, once a synchronized swimmer, appreciated the synchronicity of the dancers to one another, as well as to the animated, interactive backdrops. The animation brings characters from the screen to life on stage at just the right moment for the dancers take over the roles.

These backdrops also carry viewers to grasslands, imperial courts, and heavenly realms, which also appealed to Mrs. Nail because she had studied Chinese art and culture in college.

The primary vehicle Shen Yun uses for telling stories is classical Chinese dance, often described as fluid, graceful, and terribly demanding due to technical elements such as tumbling and aerial flips.

Mentioning a detail of one dance, Mrs. Nail said the way the handkerchief props were used was beautifully artistic. The dancers throw up a handkerchief boomerang-style, perform an aerial walkover, and then catch it.

“The ‘Handkerchiefs’ dance, we are still trying to figure out how they did that!” she said.