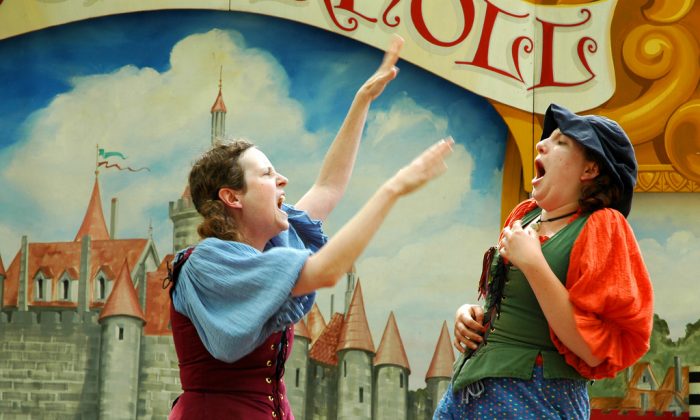 All the world’s a stage to play on. (Clinton Steeds, CC BY)
Arts & Culture

Somewhere, in the depths of your memory, you can probably still recall a quote or two from Shakespeare. Everybody in the UK studies the Bard at school – whether they go on to love him or hate him. As leading lights in Shakespeare scholarship gather to discuss the finer nuances of his work it’s clear that, 450 years after his birth, Shakespeare’s plays and poetry play a unique role in English education. Now new ways of teaching Shakespeare are encouraging children to take creative leaps with his language and meaning – and helping them learn in the process.

The new English curriculum continues to insist that all students should study Shakespeare, covering at least two of his plays between the ages of 11 and 14 years old. But since public education began, there have been debates on if and how Shakespeare should be taught.

The Victorians introduced the idea of reading Shakespearean literature to “improve” young minds. In the late 20th century this translated into a reductive, desk-based approach with examinations requiring students to analyse individual scenes in detail, often with little or no understanding of the play as a dramatic whole.

But the publication of Cambridge academic Rex Gibson’s Teaching Shakespeare in 1998 has led to a focus on bringing the plays alive as theatrical performances. Gibson argued that if we treat Shakespeare’s plays as scripts to be performed, then students are able to actively interpret a text in ways that are relevant to them.

It is the very complexity of Shakespeare’s language which makes his work so suited to creative approaches led by students. The difficult language, complex plots and distant settings of the plays demand new ways of thinking from children. And when they study the plays by performing them, it allows them to take creative risks, giving children a sense of confidence and ownership over the text.

Today, Gibson’s philosophy and practical exercises, alongside other ideas such as those around the use of the voice and language by voice coach Cicely Berry, have created a more unified approach to the way children learn Shakespeare.

Although companies such as the Royal Shakespeare Company, Shakespeare’s Globe, and the Shakespeare’s School Festival have their own particular take on educating children about Shakespeare, they share a commitment to ensemble, rehearsal-room exercises. Ultimately, children and teachers alike are now increasingly being invited to play with Shakespeare.

Drama education scholar Joe Winston has studied this playful approach to Shakespeare in the RSC’s work with some of its youngest students. He has used games and exercises to explore the story of The Tempest with four and five-year-olds.

My own ongoing research with the Shakespeare Schools’ Festival has looked at how teachers are encouraged to explore the vocal possibilities of the language with their students, to enjoy playing with the curious words. One teacher, introducing her class of nine and ten-year-olds to the language of Richard III, encouraged them to: “enjoy the strange words, taste them like sweets”. The children delight in this, and begin their rehearsals feeling this language is “theirs”.

The benefits of beginning with a playful approach like this which avoids the need for torturous explanations of Shakespeare’s language is increasingly backed up with linguistic research. Linguist Guy Cook suggests young children will learn language just as readily through playing with “form” as with “content”.

Another key to this approach to teaching Shakespeare is the ensemble: a theatrical model of collaborative creativity. The principle is that working together creates a safe space which is never a comfort zone. This removes pressure (there is no right or wrong answer) without lowering the stakes (members of the group are still accountable to each other, the demands of the text and, if performing, the audience). “Star turns” by one child are discouraged and the teacher becomes an informed facilitator, rather than the unchallengeable authority.

In practice, the ensemble approach may see parts shared between the whole cast: picture a primary school class filling the Globe stage during a performance of The Tempest. In the scene where Ariel begs his freedom and Prospero denies him, one student stands centrally as Prospero, while 25 children weave around him as the fairy-like Ariel, calling their responses in chorus.

In a lesson or rehearsal, students can also explore a scene together in small groups through freeze frames and modern improvisations. Teachers can intervene to prompt discussion, inviting the group to return to their scripts for reference, to think of other versions of the play they have seen, or to make links with their own interests. Take, for example, a group of GCSE children I observed rehearsing Titus Andronicus who were delighted by its dark content, and themes of loyalty and betrayal. Only two actors will be on stage in the final performance, but the whole class contributed to shaping the scene.

This is an approach based on games, exercises, experiments and improvisations built by the teacher, but in which students must take a creative leap. Working on Shakespeare in this way takes time, risks and mutual trust.

The artistic and educational outcomes are not precisely predictable in terms of educational levels and grade boundaries. Yet national evaluation carried out by Shakespeare’s Schools Festival and research commissioned by the RSC has indicated that when students are able to play with Shakespeare and construct meanings true to both the texts and their own lived experience, they grow in confidence and academic engagement.

Jennifer Kitchen receives funding from The Economic and Social Research Council. This article was originally published on The Conversation. Read the original article.