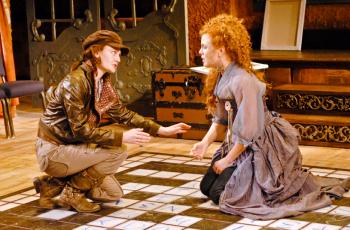 The play is woven together through a mix of traditional themes and the style of “steampunk,” which combines Victorian costume and romance with a contemporary twist. Gowns, top hats, and great coats, are mixed with gears and cogs to create Shakespeare's imaginary world of Illyria.

Parker said that she chose the style of steampunk as it allowed her to better create another world, while still making it relevant to the Shakespeare theme. She commented that all too often, directors try and take a concept and cram a piece into it. The unique techno-Victorian style allowed her to create an original concept that still stays true to the play's tone. “The steam allowed me to make a world magical enough that the suspension of disbelief could take the audience to another place, but was enough like our world that the audience felt comfortable there,” she said.

With women dressed in both jeans and corsets, the audience could better understand the standards of the world. “In this land of Illyria you have restriction and freedoms,” said Parker. “There were rules and concepts, but the audience could follow it. “Twelfth Night” is not set in Victorian times, it is set in a different time frame and a different world.”

Staying true to the traditional poetics that Shakespeare had intended in the piece, Parker said that she had chosen to keep it unchanged as the lyric could better convey the emotions of the characters. “I think what poetry does is liking it to musical theater,” she said. “In musicals, there’s no logical reason for someone to break into song in a corn field. Your emotions are so huge that you have to break out into song.”

“Poetry is the only thing that will allow us to say what we want to say,” she said.

Parker said that despite its wide usage, she chose to do “Twelfth Night” because its theme is always relevant; one of falling in love, being rejected, and wanting more in life. Also, its humor is still entertaining to today's audiences. “I like the variation between drama and comedy,” she said. “We use comedy to deal with things all the time.”

She also said that the play presents values that she would like bring out in her works. “I'm not one who would do a play about Bush or Clinton or something. I like plays about human drama,” she said. “‘Twelfth Night’ is a story about how we fit together as a world. The basic premise for Twelfth Night is that the world of Illyria was falling apart because the Duke and Olyvia were not paying attention to what they were supposed to be doing.”

“I see something in this play and I'm hoping to convey what this playwright has said to other people because I think it’s useful to people,” she said.

Parker explained that in the art of creating a successful play, the actors try to utilize truth and beauty to reach the audience. “If you can touch it even for the brief part of a moment, people will experience it,” she said. “When they can’t remember the characters names, what the set looks like, they 're going to remember that they felt something.”

Twelfth Night will be showing until Nov. 23 at the Gloria Maddox Theatre in Manhattan.

Joshua Philipp
Follow
Joshua Philipp is an award-winning investigative reporter with The Epoch Times and host of EpochTV's "Crossroads" program. He is a recognized expert on unrestricted warfare, asymmetrical hybrid warfare, subversion, and historical perspectives on today’s issues. His 10-plus years of research and investigations on the Chinese Communist Party, subversion, and related topics give him unique insight into the global threat and political landscape.
SHARE
Friends Read FreeCopyFacebookTweet
You May Also Like