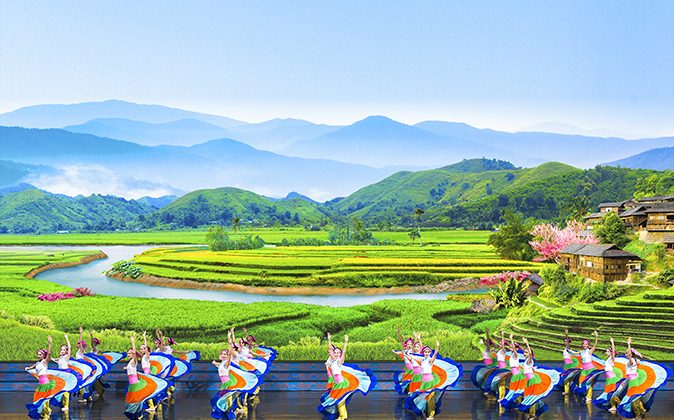 Be it the spirited hospitality of Mongolian steppe women or the masculine agility of Yi shepherds in the southern mountains, performances by the New York-based classical dance company Shen Yun Performing Arts draw from China’s rich history of 5,000 years. Shen Yun incorporates diverse traditions and heritages, including those of folk and ethnic groups.

A nation the size of Europe, China is home to dozens of distinct ethnicities and cultures, and was host to many more across the ages. Today, 56 recognized ethnic groups reside within China.

Every year, Shen Yun’s performances include these folk and ethnic dances originating from the vast and frigid Northeast to the semi-tropical borderlands of southern China.

“You feel that it’s from China. You see they’re really using their actual Chinese origin,” said Tibor Pelsoczy, an author and classically trained dancer from Hungary, who caught a performance in Melbourne, Australia, last season. “They really, really express themselves, their ethnic [traditions].”

The authenticity audience members saw in Shen Yun was refreshing, and what they felt was a rare look into the real China.

Arlene Souza, a television producer who saw a performance in Knoxville, Tennessee, summed up what many audience members expressed that season: “I think that the spirit of a country, their culture, should never be eradicated. A country’s culture should always bloom and grow, and it should be shared with the world.”

Ethnic minorities and their distinct ways of life reflect differences in local topography, climate, and religious tradition. Naturally, these factors are also deeply embedded into each ethnicity’s dance style.

For instance, the Manchurian dance, a recurring staple of Shen Yun performances, features stately and dignified female dancers. The young women don the imperial regalia of princesses and dance with gingerly steps on small soled “flower-pot shoes” in front of a backdrop evocative of Beijing’s Forbidden City.

By contrast, both male and female dancers performing in a Mongolian style assume a decidedly free and dynamic air reminiscent of a life lived with horses on the great steppes of northern Asia.

From the peasant life in central China’s Huai River valley comes the iconic “Flower Drum Lantern” dance. According to the Shen Yun website, the Huai River valley is a melting pot for northern and southern Chinese folk traditions.

This type of dancing “can thus be both bold and unconstrained as in the north, or elegant and gentle as in the south.”

Other ethnic dances featured by Shen Yun come from the south and west. Among these are the dances of the Yi, Qiang, Dai, and Miao (or Hmong) people, as well as those of the Li ethnicity residing on the island of Hainan.

Shen Yun’s performances, while stylized, take care to portray these diverse arts with the spirit of the original ethnicity or community.

Be it the spirited hospitality of Mongolian steppe women or the masculine agility of Yi shepherds in the southern mountains, Shen Yun performances draw from China’s rich history of 5,000 years.

Ms. Chen, a former dance instructor in Beijing, went to Taiwan in 2013 to attend a performance by Shen Yun. She was particularly struck by the power and authenticity of the piece “Dancing for the Gods,” which depicts a traditional Tibetan dance.

“It illustrated perfectly the characteristics of the Tibetan ethnicity, and the dance is very spirited,” Ms. Chen said. “The male dancers’ artistic level is very high in terms of technical skills, form, and bearing.”