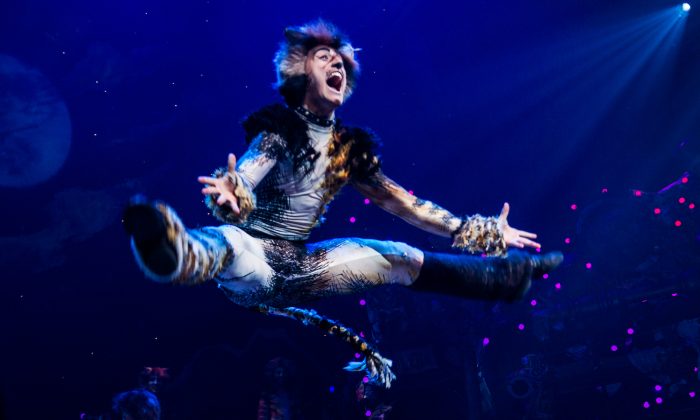 At a recent Broadway performance of Andrew Lloyd Webber’s “Cats,” the audience and performers got on like–cats and dogs.

The famed Andrew Lloyd Webber production at the Neil Simon Theatre had to be halted when a service dog belonging to a musical goer suddenly bolted and chased one of the characters, reports Page Six.

According to Page Six, the canine “got away from its owner and ran after [the character] Bombalurina, performed by actress Mackenzie Warren, during the  opening number.”

A quick-witted staff member at the venue reportedly “intervened and returned the wayward canine to its mortified owner,” reports Daily Mail.

A spokesperson for the production allegedly confirmed that such an incident did, in fact, take place.

“In the storied history of ‘Cats,’ this is the first time one of the actual cats was involved in an incident with a dog,” states the Page Six report, “We’re pleased to report that no animals or humans were harmed in the dust-up, and the performance continued without a hitch.”

The Cats production is based on a book by T.S. Eliot called Old Possum’s Book of Practical Cats.

It tells the story of a tribe of cats, of which the most deserving is chosen in a rite-of-passage ceremony to ascend to a higher realm and get a new life.

The megamusical premiered in London’s West End in 1981, and was performed the following year on New York’s Broadway, going on to win the Tony Award for Best Musical.