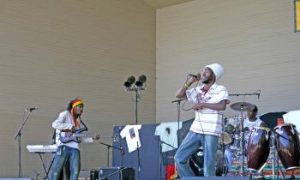 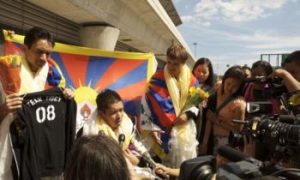 Ms. Chen praised Shen Yun’s exquisite and stunning performance, saying, “I can feel the enormous energy radiating from the stage. [And] I am so much inspired by Shen Yun’s singing solo vocalists!”

Sitting in the front row, Ms. Chen had the perfect opportunity to see the performers close-up. “I was attracted by the facial expressions of the male dancer in the center. It was so bright and penetrating that it drew my total attention.”

Ms. Chen was also touched by the lyrics of the songs sung by the solo vocalists. Shen Yun's award-winning vocalists, a tenor, soprano and baritone, perform piano-accompanied solos.

She indicated that the dancers’ certainly challenge the body's limits, and that such masterly dancing skills are rarely seen. She praised the outstanding synchronicity of the dancers’ body movements and postures.

Still feeling the spirit and atmosphere of the show, Ms. Chen added, “I hope I can experience Shen Yun’s power every year. I will also share with my sons what I felt today and bring them to the show next year.”