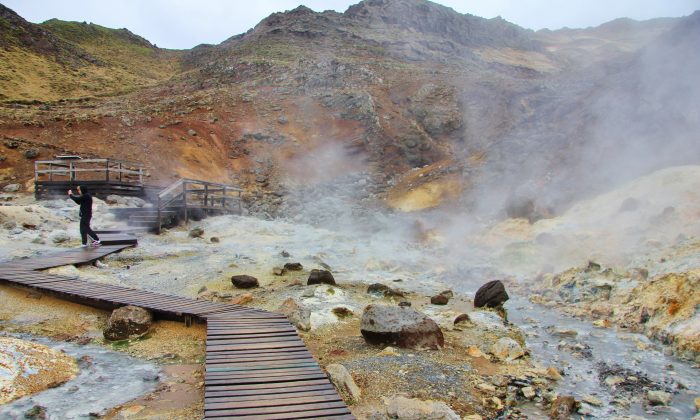 Seltún: Walking on Mars in Iceland

I want to introduce you to Seltun, one of Iceland’s extreme geothermal areas.

If you ask anyone who’s been to Iceland why they like it so much, somewhere in their answer they’ll talk about its bizarre landscape. Known as the ‘land of fire and ice’ it’s guaranteed you’re never going to get bored by looking at the same thing for too long in a country that’s small, and yet boasts an incredibly diverse and powerful landscape.

Situated on the Reykjane peninsula of Iceland, only 40 minutes drive from Reykjavik you’ll find Seltun, a high geothermal area that consists of bubbling mud pots, thermal springs and fumaroles. These unique elements to Seltun can be attributed to its location falling in the middle of the fissure zone on the Mid-Atlantic Ridge which traverses Iceland diagonally from the south-west to the north-east of the island.

As you walk towards Seltun, the first thing that strikes you is it’s lunar and Mars-like appearance. A land shrouded with clouds of water vapour with colours of red, orange, golden and dark silver pools of mud begin to emerge from the earth’s surface. But don’t take my word for it, here’s a quote from NASA about Mars:

“Its surface is rocky, with canyons, volcanoes and craters all over it. Red dust covers most of its surface. Mars has clouds and wind, just as Earth does. Sometimes the wind blows the red dust into a dust storm.”

During my visit with Alex, most of the time we had the whole place to ourselves and this made us feel even more like we had landed on an otherworldly planet. It’s not just arriving at Seltun that’s spectacular but the journey getting there is equally impressive, driving along the west coast with the ocean on one side and lava fields and mountains on the other. A memorable stop came when we spotted a dry fish farm in the distance and noticing there was no-one around, we pulled up and headed towards it. Thousands of fish had been hung to dry out on racks, and many were tied to string to make an unusual looking necklace, ready to be shipped off and gobbled up by salty fish lovers around the globe.

From Seltun you can also go to Gunnuhver (appox. 35 minutes drive west), another prominent geothermal area that’s home to Iceland’s largest mud pools. During my visit the wind was blowing me into oblivion as well causing the whole area to look like a Turkish bath – I literally couldn’t see anything beyond a metre in front of me! I’m not a fan of fighting against the wind so we didn’t stay for too long, but it’s definitely worth a visit and hopefully you’ll get a chance to see more of this bizarre spot than I did!