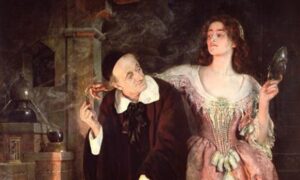 ‘The Birth-Mark’: An Allegory for Our Time
0
Share Now
FacebookTweetParlerEmail
Copy Link 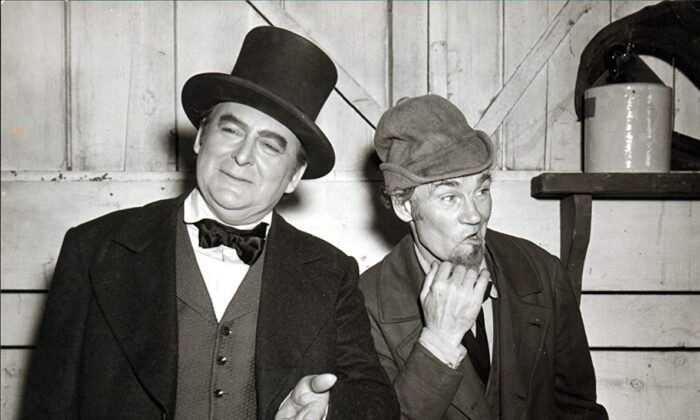 Edward Arnold (L) as Daniel Webster and John Huston as Mr. Scratch in the 1941 film “The Devil and Daniel Webster,” originally titled “All That Money Can Buy.” (RKO Radio Productions)
Literature

Selling Our Souls: Lessons From ‘The Devil and Daniel Webster’

America sports a pantheon of folk heroes, picturesque inventions of the imagination or real-life celebrities made mythical by time and the exaggerations of yarn spinners.

As children, most of us heard stories of the lumberjack Paul Bunyan and his blue ox Babe, of Johnny Appleseed planting orchards on the frontier, and of the “steel driving man” John Henry and his contest with a steam drill. Davy Crockett “kilt him a bear when he was only 3,” wolves raised the cowboy Pecos Bill, and Casey Jones died as an engineer in a train accident saving his passengers “with a hand on a whistle and a hand on a brake.” Mollie Pitcher was the nickname given to a woman who fought in the Revolutionary War and carried water to thirsty soldiers, and the Wild West’s Calamity Jane had many tales told about her, some of which she created herself. From “Big Bad John” to Brer Rabbit, Americans have delighted in their folk heroes.

Many of these characters reflect the values and customs of America that differed from those of their European cousins at the time: a tendency to braggadocio, a willingness to singlehandedly tackle impossible tasks, and a belief in personal liberty that ran as deep as Lake Superior.

Which brings us to Stephen Vincent Benét’s short story “The Devil and Daniel Webster.”

New Hampshire farmer Jabez Stone lives under such a cloud of bad luck—“If stones cropped up in his neighbor’s field, boulders boiled up in his”—that after breaking a plowshare one morning, he says, “I vow it’s enough to make a man sell his soul to the devil!”

The next day, “a soft-spoken, dark-dressed stranger” drives up in a buggy and concludes a bargain with Stone. His cows fatten up, his crops multiply, and his community recognizes him as an increasingly important man, electing him to political offices and envying him his newfound wealth.

The stranger, of course, is the devil to whom Stone has sold his soul. After years have passed—by this time, Stone is a possible candidate for governor—the time has come for him to keep his part of the bargain, to die and give the devil his due. In a panic, Stone seeks the help of Dan’l Webster, an attorney and United States senator, and one of the most famous men of his time.

Webster agrees to take up Stone’s cause, accompanies him to his home, and shares a jug of liquor with him while they await the stranger. On the stranger’s arrival, Webster insists on a jury trial, and Scratch, as the stranger calls himself, provides a judge and jury from hell, comprising infamous Americans of that time and earlier: murderers, brigands, and thieves. Webster seems on the verge of losing his case until he begins “talking about the things that made a country, and a man a man.”

Walter Butler, the head juror and the loyalist who had spread “fire and horror through the Mohawk Valley in the times of the Revolution,” then rises and announces that the jury has found for Jabez Stone. Webster defeats Scratch so badly that “whenever the devil comes near Marshfield, even now, he gives it a wide berth.”

So what can we readers take away from this folk tale?

As in much of his poetry, Benét in “The Devil and Daniel Webster” injects an old-fashioned love of country into his story. When the devil demands Stone’s soul, Webster answers in a voice of thunder: “Mr. Stone is an American citizen, and no American citizen may be forced into the services of a foreign prince. We fought England for that in twelve and we’ll fight all hell for it again!”

Later, in addressing the infamous jurors, “he talked of the early days of America and the men who had made those days. It wasn’t a spread-eagle speech, but he made you see it. He admitted all the wrong that had ever been done. But he showed how, out of the wrong and the right, the suffering and the starvations, something new had come. And everybody had played a part in it, even the traitors.”

“The Devil and Daniel Webster” reprimands America in several places for those wrongs—it condemns slavery in particular—but it also reminds us that our history is filled with attempts to right those abuses.

Webster’s nicknames were “The Great Orator,” “The Godlike Daniel,” and “The Defender of the Constitution,” but his detractors called him “Black Dan” and “Prince of Traitors” for some of his political stances and for believing him a cruel man, a prodigious drinker, and possibly a libertine.

Benét appraises him in this way:

“You see, for a while, he was the biggest man in the country … There were thousands that trusted in him right next to God Almighty, and they told stories about him and all the things that belonged to him that were like stories of patriarchs and such. They said, when he stood up to speak, stars and stripes came right out of the sky, and once he spoke against a river and made it sink into the ground … A man with a mouth like a mastiff, a brow like a mountain, and eyes like burning anthracite—that was Dan’l Webster in his prime.”

Webster had many flaws—self-promotion, an inability to manage money, a predilection for drink and perhaps for women—but he had one virtue some of our citizens lack.

He loved his country.

The real Daniel Webster once spoke these words: “I apprehend no danger to our country from a foreign foe. Our destruction, should it come at all, will be from another quarter. From the inattention of the people to the concerns of their government, from their carelessness and negligence, I must confess that I do apprehend some danger. I fear that they may place too implicit a confidence in their public servants, and fail properly to scrutinize their conduct; that in this way they may be made the dupes of designing men, and become the instruments of their own undoing.”

Benét’s Jabez Stone is an ordinary man struggling to make a living and provide for his wife and children. Millions of Americans today find themselves in the same boat.

When Scratch appears to Stone and promises him wealth and success beyond his wildest dreams, we might think of some today who make such promises. The devil to whom we sell our souls needn’t come out of hell; he may just as well come out of Washington, D.C., offering us such gifts as canceled student loan debts, Medicare for all, more welfare benefits, and other handouts in exchange for our rights and liberties. All we have to do, as Jabez Stone did, is to put our blood signature on the contract, and we’ll be taken care of.

In other words, we will become children.

Fortunately, many Americans understand that such dependence is not the American Way, that it is instead a bargain with the devil and leads to slavery. These are the people—a few politicians, our neighbors, the mechanic with grease under his fingernails, a wife and mother I know—who like Benét’s Daniel Webster would say, “By the thirteen original colonies, I’d go to the Pit itself to save the Union!” By that proclamation, Webster means he would march into hell itself to preserve our nation and its Constitution.

These are the people who stand for liberty, and we must stand with them.

Jeff Minick has four children and a growing platoon of grandchildren. For 20 years, he taught history, literature, and Latin to seminars of homeschooling students in Asheville, N.C. He is the author of two novels, “Amanda Bell” and“Dust On Their Wings,” and two works of nonfiction, “Learning As I Go” and “Movies Make The Man.” Today, he lives and writes in Front Royal, Va. See JeffMinick.com to follow his blog.