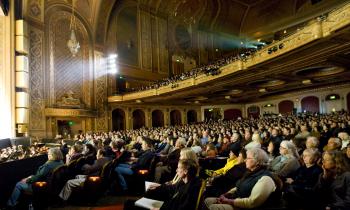 Several official dignitaries from around Washington State sent greetings, and many who attended the shows heaped praise on DPAs rich repertory of dance pieces, accomplished soloists, and original musical scores in its lavish portrayal of traditional Chinese culture.

Judge Gavin said it was regretful that the show is not allowed to perform in China, and hoped that as DPA continues to tour “the word will spread, and maybe it will make a change. All it takes is just one voice.”

“All of it is wonderful. I like the way the music is somewhat contemporary but it also ties in the Chinese traditional sound and uses traditional instruments and a full-bodied string section. The percussion is excellent and I am amazed at how the dance fits… and how it all fits together. It’s just wonderful,” she said.

Arts commissioner Ms. Sambamurti was of like mind, saying the music was “very touching, very warm, and carries a good message.”

The celebration of traditional Chinese culture through the medium of Chinese classical dance is at the heart of the “Spectacular.”

Ms. Anciaux Aoki, an international language educator, said the show is “a beautifully put together performance. It has a great rhythm to it. It is really nice to see something that covers so many different centuries, and the culture that we all share.”
The backdrops in the DPA production are custom-designed to coordinate with the costumes, choreography, lighting, and storyline for each dance, something that impressed Ms. Anciaux Aoki.
“I came to the performance last year so I had seen this, and that was the first time I had seen that kind of projection, the backdrop. It was really fantastic to watch, how the production is done, and the idea of actually bringing new elements in from outside and the dancers live on stage. I think it is very exciting to see.”
Painter and sculptor Mr. Timo was also struck by the backdrops.

“I think one of my favorite things has been the transition from what’s going on onstage to how it goes back into space on the backdrop. It’s a beautiful transition and the color and just that relationship is what I am always looking at. I am visually oriented as a fine artist. It transitions back into space that took place between light and dark,” he said.

“[The backdrop] is implying the three-dimensional, and that is what I think is interesting. You have the actual figures on the floorplan and then you go back in space, showing that depth.”

Ms. Bonis, financial administrator for a software company, described the show as “phenomenal.”

“I’m walking out of here completely inspired — very inspired, very moved, very attached. I cried in several places. It was wonderful, she said.

“All of it … The very opening, the minute the curtain went up, I started to cry. It hadn’t even gotten into the show yet, and I started to cry. I was so touched. As soon as I saw all of the colors and dancers and everything else, it was very touching.”

Ms. Bonis was especially moved by the piece, "Heaven Awaits Us Despite Persecution,” which tells of a father being persecuted for practicing Falun Gong, a traditional spiritual discipline rooted in ancient Chinese culture that was banned by the Chinese regime in 1999.

“The one about the persecution that’s going on — that one I did shed a lot of tears, you know. It just made me really sad. I wish that there were something that I could do."

One of her favorite dances, “The Monkey King Triumphs,” is the story of a journey that a Buddhist monk, a pig-like ogre, and a magical monkey king undertake to obtain Buddhist scriptures. During this dance, the DPA orchestra accents the characters’ trials and tribulations, adding depth to the performance.

“It’s very nice, especially the drama, the Sun Wukong [the monkey king] part of it. The music really corresponded to the drama, so it was very well done, almost kind of operatic, so very good” Dr. Yeh said.

Performances by solo singers are an integral part of the DPA experience. Sunday’s show featured two tenors, a contralto and a soprano.

“I liked [the singing] very much. I really thought all four songs were very rich—their voices were very rich,” said Mrs. Carpine, 80, head and cofounder of a large non-profit environmental organization based in Seattle.

“The voices were very beautiful, and what impressed me… so often when you come to performances you don’t hear them when you are near the back, but these singers, their voices were carrying. You could really hear them.”

Mrs. Carpine appreciated and was moved by the spiritual messages in the performances.

“I still sing in choirs in the church so I can see the spirituality in your poets and your singers, of course, right away, in what they were saying,” she said.

“Just the words they were singing about life, you know. But there is a lot more pain that they are expressing from their history, I think. I didn’t know any of the stories behind the dancing.”