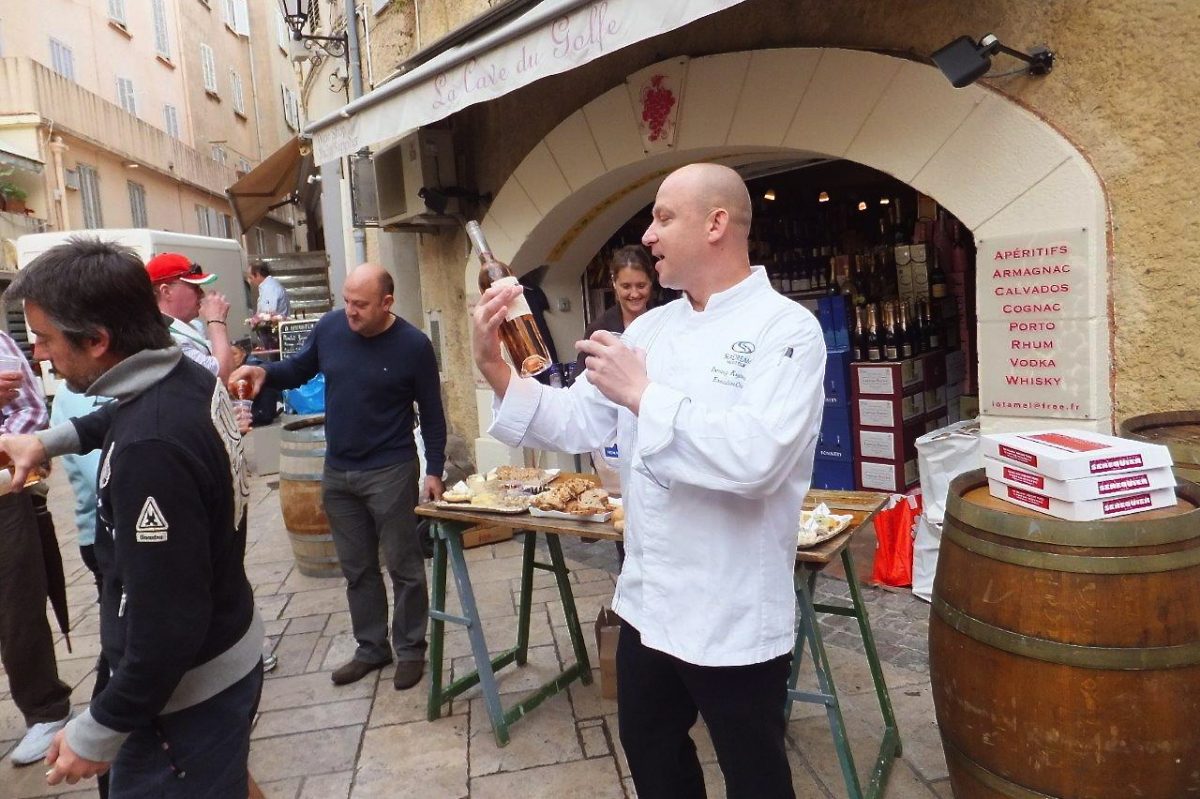 But it’s Chef Tomasz who is the star; with arms constantly flailing – “I talk with my hands!”, he says – he describes in minute detail the food items we are tasting, and the rosé wines that are made from not only grapes, but from peaches as well.

He’s like some modern-day Pied Piper, except that it’s not children he’s leading through the town square, but adults—some 60 of us, mesmerised by the promise of what he says lies ahead.

It’s a Sunday morning and we’re in St Tropez on the French Riviera, playground of jetsetters, millionaires, movie and catwalk hopefuls. But we’re not heading to the beach.

Our Pied Piper – in reality Tomasz Kozlowski, executive chef aboard the boutique mega motor-cruiser SeaDream II – is leading us to a little town square where he has organised a tasting of local rosé wines, cheeses, nuts, olives, breads and biscuits, and what turns out to be a ripper traditional St Tropez onion tart.

A few days earlier when we’d gone on a market tour with Chef Tomasz at another port, only 25 of the 80 guests aboard the SeaDream II came along to enjoy the spectacle of him gesticulating with traders over produce he was buying for that night’s evening cocktail gathering, and giving us tastings of their local fruits and other market produce.

So popular was it, that today in St Tropez it’s not just 25 guests but well over 60 who have tagged along. And we’re well-rewarded: after passing through what we think is just an alleyway of a few small food stores, we emerge into a picturesque village square.

Mr Tomasz leads our conga line to an open-fronted wine shop where the owner has set up trestle tables. Other local producers have brought samples of their produce for us to try alongside his wines.

It’s only just after 10 o’clock and there are fewer than a dozen local Tropeziens already out for Sunday shopping. They appear both bemused and delighted at the presence of our group from 14 nations who’ve crowded into their square.

Some enquire as to where we are from, others ask about our impressions of their town. And the various traders who’ve brought their produce over for us to try speak enthusiastically about their offerings.

But it’s Chef Tomasz who is the star; with arms constantly flailing—“I talk with my hands!” he says—he describes in minute detail the food items we are tasting and the rosé wines that are made from not only grapes, but from peaches as well.

We’re offered one, and wonder if at this early hour it’s a good idea—but seeing our fellow guests getting stuck into theirs, and smacking their lips in satisfaction, we decide that it may be 10am in St Tropez, but it’s got to already be “wine o’clock” somewhere else in the world.

And our hosts don’t skimp: glasses are filled and re-filled with the different Rosés, and empty plates are whisked away to be replenished with fresh offerings. And while Chef Tomasz has said that our tasting will “be about an hour”, we are there for nearly double that, relishing every moment, every mouthful.

When we are told that all good things must reluctantly come to an end, we say fond thanks and sad farewells to our wonderful Tropezien hosts—while Chef Tomasz and several of his staff from SeaDream II load up bags and boxes filled with all manner of the produce we’ve sampled, to feature in that night’s regular pre-dinner cocktails aboard SeaDream II.

On the way back to our mega-motor cruiser, Chef Tomasz tells us how he’s always loved food and cooking, having learned much from his mother whom he idolised for her culinary skills, leading him to go into cooking school as a teenager. After stints in shore-side restaurants after graduation, he worked on several large ships catering to 2000 to 3000 guests each, but quickly decided that that wasn’t for him.

So he joined SeaDream Yacht Club in 2002, with each vessel carrying a maximum of just 112 guests. He is just as enthusiastic today as he was when he joined eleven years ago.

For information about sailing aboard the boutique SeaDream II and twin-sister SeaDream I, see travel agents or visit www.seadream.com.

David Ellis is an Australian freelance writer. He has over 30 years experience in journalism, including working as chief of staff for ABC Radio National.

Reporting by Frank Linn who was a guest of SeaDream Yacht Club’s SeaDream II.