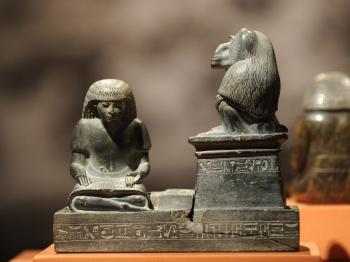 Scribe from a Golden Age

By Epoch Times Staff
Print
EXQUISITELY CRAFTED: The stone statue “The Royal Scribe Nebmerutef with the Baboon of the God Thoth” is on display through July 4 in the exhibition Haremhab, The General Who Became King at the MET. The ancient Egyptian statue is dated from the reign of Amenhotep III, 14th century B.C.—a period of peace and abundance when Egypt reached the peak of its artistic splendor and international power, also referred to as the Golden Empire. According to ancient Egyptian understanding, Thoth is the scribe of the gods and the one who introduced writing, the hieroglyphs, to the human world. He is depicted with the head of a baboon when he is A’an, the god of equilibrium, who reports when the scales weigh a deceased’s heart. The MET exhibit displays some 70 objects—wall reliefs, works on papyrus, statuettes, and garment fragments.
TOP NEWS