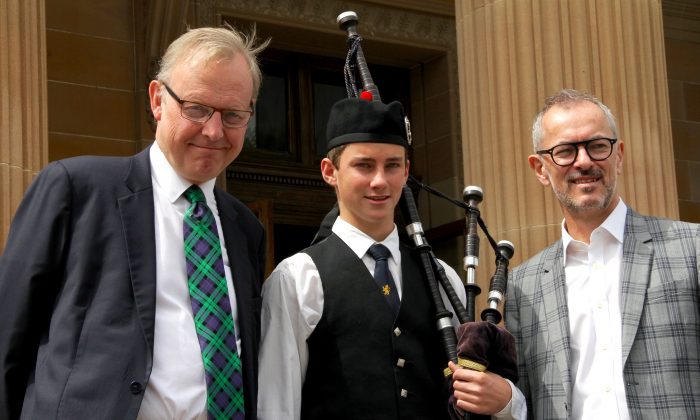 SYDNEY—There it was drifting through the magpie song and around the sandstone Art Gallery of New South Wales on a sunny Sydney day, the distinctive misty-laden ministries of the lone bagpipe.

“I thought I was back in Edinburgh,” quipped director of the Scottish National Gallery, Michael Clarke CBE, speaking of young Matthew McGowan, The Scots College student playing his pipes on the gallery steps.

Mr. Clarke, and the lone piper, were launching the major summer exhibition of the Art Gallery of New South Wales, “The Greats: Masterpieces from the National Galleries of Scotland.”

‘The Greats’ presents over 70 works of the great masters from the Scottish collection, and spans 400 years of art from the Italian Renaissance, the Baroque in Southern and Northern Europe, the French and British Enlightenment to nineteenth century Scotland and Impressionism.

Included are religious and mythological subjects from masters like Titian and Botticelli, landscapes, still lifes and portraits from the likes of Velázquez, Vermeer and Constable, and concludes with works from more recent artists like Monet, Gauguin, and Cézanne.

Also included in the collection are over 30 old masters drawings by some of the greatest names in Western art, including Leonardo da Vinci and Poussin.

Mr. Clarke said the drawings were unique to the Sydney exhibition.

“They have been deliberately chosen to compliment the paintings,” he said.

While the two public art museums have much in common, including that they are nineteenth century “temples of art,” director of the Art Gallery of NSW, Michael Brand, said it is their mission to “collect and exhibit art for the people” that is central.

They are absolute proof of the transformative power of great art.
— Michael Brand

In that respect, ‘The Greats’ was an exhibition that would appeal to audiences of all ages, he said, “whether they have an extensive knowledge of Art History or none.”

Mr. Brand noted that the exhibition had been specifically designed and laid out for individual interpretation.

“Its all about the individual’s personal encounter with great works of art and this exhibition has really been designed to encourage that close engagement, that close looking and spending time with such a work of art.”

The international stature of the artists and the quality of their works presents a unique and powerful experience for Australian audiences, he said. “I believe, we all believe in the gallery, that they are absolute proof of the transformative power of great art.”

He highlighted Titian’s ‘Venus Rising From the Sea,’ with its “feathery brushstrokes” and “very blurred contours.”

He singled out Velázquez’s early work, “An old woman cooking with eggs” with its earthy characters and studied setting.

The painting was done when Velázquez “was very young, barely 20 years of age in Seville before he moved to Madrid,” he said.

“Look at the hand, the shadows, the tricks the artists are using,” he added.

With Sydney primed for a busy summer, Mr. Brand said the holiday season provided the perfect opportunity to take the time to really appreciate each artist and their works.

“My hope is that audiences will savour their summer by slowing down and spending time contemplating the remarkable skill of these masters,” he said.

“I can guarantee a moving and absorbing experience for those who contemplate the collection—one work of art at a time.”

“The Greats: Masterpieces from the National Galleries of Scotland” opens at the Art Gallery of New South Wales from Oct 24, 2015 to Feb 14, 2016.