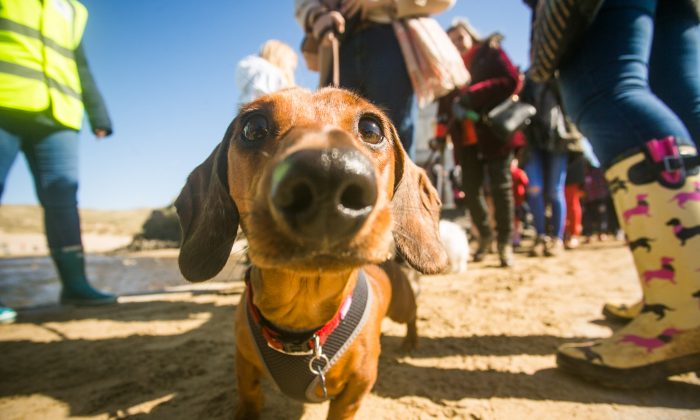 The world record for having the most sausage dogs in one place was broken on Sunday, March 25. (SWNS)
Animals

Sausage Dog ‘World Record’ Broken as Over 600 Gather on Beach

The sausage dog world record has been broken after more than 600 dachshunds gathered on a British beach.

The 601 Dachshunds that gathered at Perranporth Beach in Cornwall smashed the previous record of 500 set in December 2015, for the largest number of the dogs in one place.

Tilly the sausage dog set the new world record, as the 501st counted at the event.

Their owners flocked from all over the country to Cornwall, including Birmingham and Essex, to help set the new world record.

Jules Varley, a member of the 960-member Cornwall Dachshund Walkers group who organised the event, said, “People are making a bit of a break of it. We are over the moon at the result. It was a bit close at one time, but we are really chuffed.”

Varley, whose sausage dog named Sizzles is 18 months old, added, “Once you have one you don’t look back. They have great personalities, he makes us laugh and is so cuddly.

“He is also quite protective—a good guard dog.”

“I can’t believe it, I can’t believe so many people are here,” said Pixie Davis, who set up Cornwall Dachshund Walkers in 2016 to bring together sausage dog owners.

The dogs began to gather at Perranporth Green, next to the beach, from midday on Sunday, March 25, with the count beginning at 2 p.m. using a clicker as dogs walked over a bridge.

And by 4 p.m. the count was complete, and another member of Cornwall Dachshund Walkers, Wez Gunn, wrote on their Facebook page: “Yay 601 Dachshunds we done it.”

Olivia Fellowes wrote, “We had a fabulous time. Amazing weather and atmosphere. Awesome behaviour from all the dogs.”

Charlie Bent added, “Fantastic time, so lovely to see so many Dachshunds together.”

The event was organised to help raise money for Dachshunds affected by Intravertebral Disc Disease (IVDD), which will typically affect one in three Dachshunds. The group have regular meet-ups throughout the year, and are planning an Easter party as their next one.