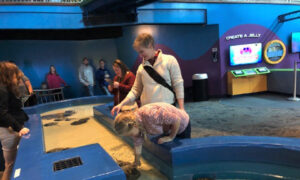 I was three years old the first time I saw Catalina Island and the town of Avalon, 30 miles off the California coast. It was my parents’ special spot. On their first date, they sailed there on a white steamship and danced to big band music at Avalon’s iconic Catalina Casino.

I remembered Avalon as a magical place with flying fish, brightly coloured tile walls, and a candy store where strands of salt-water taffy were pulled into shape by a mechanical stretcher. On a clear January day I decided it was time to take another look. The steamship days are gone but a smaller, faster ship, the Catalina Starship Express, whisked me in just an hour to the tiny harbour of Avalon.

Coming in by sea, the town—with its curving bay, steep cliffs layered with period houses, and great white cake of a Casino perched on a tiny tip of land—looks like a miniature Monte Carlo, but with a difference. There has never been gambling at the casino, just a world-class ballroom, a museum, and a movie theatre, the first one built to show talking pictures.

And unlike Monte Carlo, there are few cars. Most residents and visitors get around in golf carts. I headed for the golf cart rental office and met with a surprise. Hanging on the wall was a blown-up photo showing four young women posing in a pony cart on Avalon’s Crescent Avenue. The one in the middle was my mother!

History of the Island

Catalina Island is 22 miles long and 8 miles at its widest spot and the only inhabited island in California’s Channel Islands chain. The Tongva Indians lived here as early as 7000 BCE and used to quarry local soapstone for trade. The Spanish explorer Sebastian Vizcaino dropped anchor here on St. Catherine’s Day 1602 and named the island Santa Catalina.

In 1918, chewing gum magnate William Wrigley Jr. bought the entire island and founded the small town of Avalon, which has kept its turn-of-the-century look of narrow streets and small wooden bungalows. In 1972, Wrigley’s son created the Catalina Island Conservancy which maintains 90 percent of the island in a pristine natural state.

Ravens and seagulls soared on thermals above us while graceful cabin cruisers and two-masted yachts drew wake-lines across a shimmering sea.

Avalon is a cozy California beach town nestled among rugged mountains that run nearly 2,000 feet high and drop to the crashing waves of the windward coast. Among the chaparral and scrub oak live red fox, bison and mule deer, and bald and golden eagles.

At the Discovery Tour Plaza in Avalon I booked a tour of the island’s interior. A White Mountain Apache guide named Bear drove a modified Hummer up the mountainside to the spine of the island and across firebreak roads that looked impassible. There are no paved roads and only hiking trails outside of town.

Ravens and seagulls soared on thermals above us while graceful cabin cruisers and two-masted yachts drew wake-lines across a shimmering sea. It was so quiet, Bear could identify all of the bird calls coming from the brush around us.

One of the main attractions of Catalina’s backcountry is the herd of bison that is special to the island. Brought here in the early 1920’s by a movie company shooting a Western, the island’s bison are a third the size of the average American bison. You have to be lucky to spot them, and Bear was lucky. We came across a male grazing by the side of the road who paid us no attention. Nearby was a modern rock painting of a Tonkva Indian woman looking out to sea. The spirit of those first people, Bear told us, still protects the island.

Back in Avalon I stopped for lunch at the Bluewater Grill where I ordered a platter of sea bon bon sashimi scallops with pickled ginger and wasabi aioli. Avalon has some great places to try the local seafood. And, like much of California, Catalina has its own vineyards. The wine from the grapes, Catalina Island Reserve, is bottled under the Rusack label, owned by a Wrigley descendant.

Having explored the backcountry, I signed up for an undersea adventure aboard a semi-submersible that skirts the coast and sails through the undersea gardens of Lovers Cove. Outside the underwater windows, opal eye and calico bass floated in huge schools while golden garibaldi and tiny blacksmith damselfish flicked through the shadows of sargassum seaweed.

One of the charms of Catalina is spending the night, and after my day of exploring I settled in for some wine- and cheese-tasting at the Pavilion Hotel on Crescent Avenue.

The day trippers were gone and out the hotel’s picture widow I had the evening and the harbour all to myself. In my mind my parents were walking toward the Casino from the old steamship pier and, as I had checked earlier that day, the taffy puller in the window of Lloyd’s Candy Store was still turning.