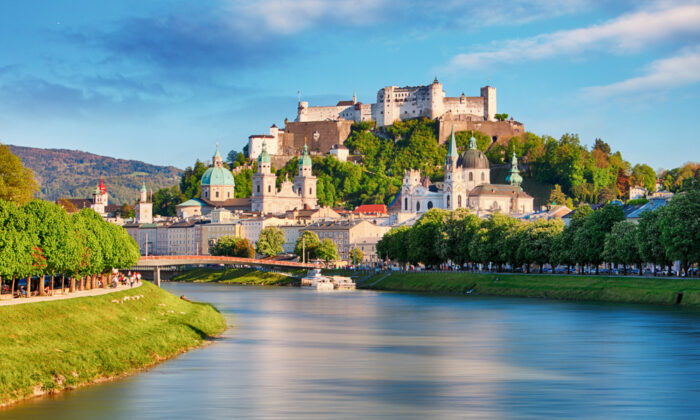 Salzburg: Beyond the Sound of Music

“Oh, is it the one with the kittens and mittens?” my husband asked as city guide Michaela Muhr began to talk about “The Sound of Music” as we walked through the streets of Salzburg. While the movie is famous around the world, most people in Austria don’t have any idea what Julie Andrews’s favorite things are. In fact, according to Muhr, it wasn’t until 2002 that the film premiered on national television.

On the one hand, Austrians are amused by the cultural cinematic curiosities, such as “schnitzel with noodles” when the traditional accompaniment is potatoes; on the other hand, only 20 years after the war, memories of the Nazi period were still relatively fresh, and the 1965 movie doesn’t gloss over the tension leading up to it.

“Salzburgers prefer to think of their city as the city of Mozart instead,” our guide said.

The legacy of one of the world’s greatest composers is noticeable everywhere. There’s the statue in the Old Town, the annual Mozart Week, and of course, the Mozartkugel. While the golden chocolate balls have been exported around the world, the original ones are actually wrapped in silver foil and can be bought where Paul Fürst invented them in 1890—at Café-Konditorei Fürst.

Johannes Chrysostomus Theophilus Wolfgangus, now famous as Wolfgang Amadeus Mozart, was born in Getreidegasse 9 on Jan. 27, 1756. The third-floor apartment was middle-class, with four rooms and a kitchen. Mozart himself spent a considerable amount of time away from the family home, as his father Leopold took him to showcase his musical talent at the most important European courts. The longest journey took three years, five months, and 20 days. Today, Mozart’s birthplace, with its distinctive yellow façade, is a museum.

Salzburg’s old town, lying below steep hills, looks much like it did when Mozart lived there more than 250 years ago. The views of the spires of 27 churches, the fast-flowing Salzach River, and the snow-covered mountains can best be enjoyed from the towering Fortress Hohensalzburg, one of the biggest in Europe.

“It was only attacked twice, never conquered and never destroyed,” Muhr said. As such, many of the buildings are from the 15th century.

It’s tempting to spend half a day here, with the Marionette Museum being a visitors’ favorite, but, pressing on, we descended the steep steps back into town and emerged next to the cemetery of St Peter’s Monastery. Local doctors, lawyers, and nobility as well as composer Michael Haydn, brother of Joseph, Mozart’s sister “Nannerl” (her nickname), and Paul Fürst of chocolate fame—the latter, watched over by skull-bearing cherubs—are buried there. The cemetery is also home to catacombs—cave-like chapels and crypts hewn out of the Mönchsberg cliff face—and the oldest grave is from the year 833.

Everything is really close by, so we strolled further past the cathedral, a masterpiece of baroque art with a bulbous copper dome, through the romantic Goldgasse, where lots of jewelry and craft stores are located, across the river, and finally into Mirabell Gardens. Flowery parterres, rose gardens, and leafy arbors were in full bloom. The adjoining Zwergerlgarten (Dwarf Garden), founded around 1695, is the oldest in Europe.

Leaving Salzburg late in the morning, we reached our next stop, Fortress Hohenwerfen, just in time for the daily birds of prey show.

“You better put anything colorful away,” staff member Birgit Meixner told me. “The birds are notorious for scooping up children’s toys and dropping them outside the castle walls,” she said with a wink.

Since 1077, the fortress has sat on a steep peak, high above the Salzach Valley. During its turbulent history, it was besieged, plundered, burned, and nearly destroyed in the 16th century by farmers and peasants. It served mainly as a prison for Protestants in the 17th and 18th centuries, then fell into disarray under Bavarian rule, followed by the Nazis who ran the fortress as a military training camp.

And then came Hollywood. In 1968, Hohenwerfen was used as a set for the World War II movie “Where Eagles Dare,” starring Clint Eastwood and Richard Burton.

The cold temperatures in the mountains keep the nearby Eisriesenwelt, the world’s largest ice cave, alive. Armed with warm clothes and old-fashioned oil lamps, we explored this “world of the ice giants,” the literal translation of the name. A good deal of fitness was required, as there were 700 steps to go up—and down. One particularly steep section, at a 45-degree angle, is nicknamed the “Seufzertreppe” (“moaning staircase”) among the staff, our guide Stefan Mayr told us.

Over the course of an hour, we passed incredibly beautiful, iridescent blue and green sparkling ice formations, which hung from the ceiling or rose from the ground. There were frozen waterfalls and a smooth rink-like ice palace. The largest attraction, called Hymir’s Castle, has grown over the course of 100 years due to a crack in the cave above, and the cave itself has expanded by a third since tours first began in 1920.

Valley of the Alpine Huts

After spending the day in lofty heights, we stopped overnight in the Grossarltal Valley, also known as the “Valley of the Alpine Huts.” Here people have lived off the land for generations, making top-quality produce before “artisan” became fashionable. Around 40 huts in the valley are open from mid-June until mid-September.

Whole families move to higher altitude pastures for the season, working with the animals in the barn, then processing the milk and serving meals to hungry hikers.

“Only food produced on the Alm [Alpine hut], like butter, bread, cheese, and cold cuts are allowed to be sold,” explained a local, Thomas Wirnsperger. Many Alms still have no electricity, and homemade delicacies are prepared true to generations-old recipes.

We dropped into the 16th-century wooden Kösslerhäusl—part museum, part restaurant, part shop—and tried a Krapfen, a sweet pastry, followed by an arolla pine liqueur. The latter, made with grain spirit, candied sugar, and pine cones, was surprisingly delicious.

While we were sitting in the tiny Rauchkuchl (smoke kitchen) under the low, soot-covered ceiling, two elderly ladies sang religious songs in a local dialect. It felt really special, nearly sacred, and like being transported back to a time long past.

A visit to mask carver Hermann Prommegger introduced us to the legend of the Krampus, a half-goat, half-demon monster who punishes misbehaving children at Christmas.

“The style is somewhat changing,” Prommegger said. “A few years back, clients requested masks that reminded them of popular movie characters like in ‘Star Wars: Phantom Menace.’ Now we’re reverting back to a more traditional way of carving.”

According to folklore, the monster shows up in towns on the night of Dec. 5, known as Krampus Night, and groups of Krampuses march through the Grossarl Valley on that evening to knock on doors and check if the children have been naughty or nice.

We finished our trip to the SalzburgerLand region with a hike of the Liechtensteinklamm, one of the deepest and longest gorges in the Alps. The roaring waterfalls and torrential waters have been making their way for centuries deeper and deeper into the ravine, creating a wonderful sound in the process, just like music.

Wibke Carter
Follow
Wibke Carter is a travel writer who hails from Germany. She has lived in New Zealand and New York, and presently enjoys life in London. Her website is WibkeCarter.com.