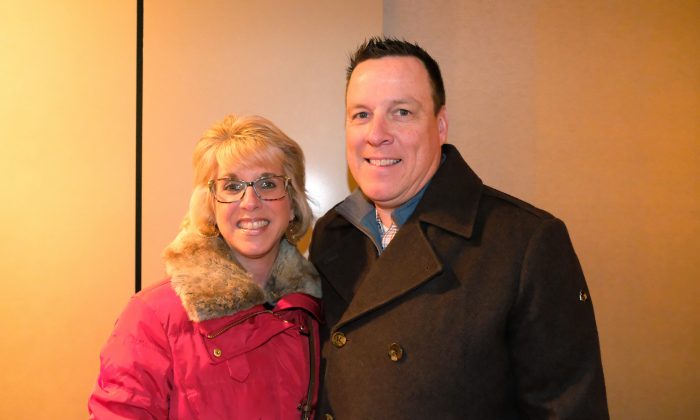 NEW YORK—Dozens of dancers draped in pink and white period costumes float across the stage before a backdrop displaying the Tang imperial court. The ladies wear long flowing sleeves that ripples through the air as their bodies extend with each dance movement.

This dance vignette, titled “Sleeves of the Tang Palace,” is but one of the classical Chinese dance pieces performed by Shen Yun Performing Arts, whose program includes 20 items of dances, stories, and musical numbers.

For first time watcher, James Lynch, VP of Sales at Octagon Merchandise, it was how the costumes blended with the dance itself that stood out to him.

“I don’t think that you can see that anywhere else,” Lynch said after attending the performance at Lincoln Center in New York City on Jan. 19.

Lynch said he had seen a lot of other performances, including ballet, and thought that Shen Yun was completely unique.

“It was visually stunning,” Lynch said.

Lynch’s wife, Jeanine Maietta Lynch, principal attorney, agreed that the performance was visually impressive, saying she loved the vibrant colors as well as the dance moves.

Shen Yun Performing Arts is currently on its 2019 world tour, with six equally-large companies traveling the world showcasing 5,000 years of traditional Chinese culture through music and dance. Each company performs with an orchestra that includes of both Chinese and Western instruments. With this unique composition, a distinctly Chinese melody plays above the resonant score of a classical Western orchestra.

The combination of instruments stood out to Lynch.

“It’s just unique; you can’t find anything else like it,” he said.

Lynch applauded the coordination between the orchestra pit and the stage artists.

“What you’re experiencing is the music matching up exactly with what’s going on [on stage], which is hard to do.”

Meanwhile, Maietta Lynch credited Shen Yun for performing with a live accompaniment, as she was thought a live orchestra is a dying art.

Janine appreciated learning about the history behind China’s ancient culture, as depicted through the stories presented on stage using classical Chinese dance.

The program includes stories passed down over the millennia, each containing morals embodying the beliefs and traditions of traditional Chinese society. These include faith in the divine, the idea that good will be rewarded and evil punished, and having courage to speak the truth.

The attorney said she felt fortunate to be able to experience traditional Chinese culture as presented by Shen Yun.

“It’s sad to me that the culture can’t be experienced … in China,” she said.

“I feel bad for the people of China who don’t get to see this because it’s really beautiful.”

Much of traditional Chinese culture has been lost in China since the Chinese Communist Party seized power 70 years ago. Through numerous political campaigns culminating in the Cultural Revolution in the 1960s and 1970s, the communist regime decimated traditional beliefs and thinking with the goal of ensuring absolute loyalty to the party.

The final story of the performance is set in modern-day China and carried the theme of reviving China’s traditional culture, said Maietta Lynch.

“[The modern day story] smack[ed] people back to reality that: we kind of need a little culture,” she said.

James wished Shen Yun Performing Arts the best of luck in its mission to revive China’s ancient and profound culture.

“With six companies out there worldwide … that should be pretty promising. I hope they can do it.”