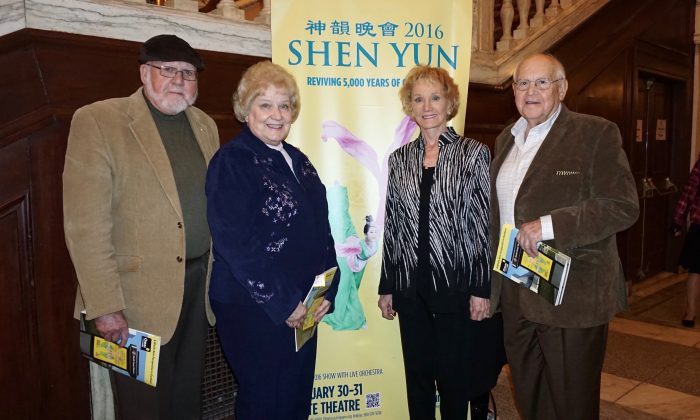 Louis Fisi, CEO of Teraphysics, a research and development firm for NASA, became curious about Falun Dafa, a spiritual discipline, after seeing Shen Yun dances which depicted the practice and the troubles the practitioners currently face. Those practitioners live by the principles of truthfulness, compassion, and tolerance, and are severely persecuted in China today.

Shen Yun, based in New York, cannot perform in China. In the last few decades, China’s communist regime has nearly obliterated the traditional arts and beliefs from 5,000 years of civilization. Shen Yun began in 2006 to salvage and rejuvenate that traditional culture.

Mr. Fisi, attending with his wife Delores, and friends Pat and Gloria Ryland, caught the performance at the State Theatre on Jan. 30.

Also in the audience on Jan. 30 was Tina Dinardo, a physical therapist, and Mark Anghilante, a sales professional for The Hard Shop. As an active and faithful Catholic, Mr. Anghilante, like Mr. Fisi, was reflecting on what he saw.

The song lyrics in particular struck Mr. Anghilante. Of the 20 pieces Shen Yun presents, most are dances accompanied by an orchestra combining Eastern and Western instruments. But award-winning vocalists also perform with piano accompaniment. The lyrics to their songs, translated in English, are projected on backdrops behind them.

These lyrics present a yearning of mankind for the divine in which Mr. Anghilante saw similarities to his own faith; yet he saw enough differences that he would entertain mulling them over with the performers.

Ms. Dinardo was surprised the performance had the kind of depth it had. “It was the combination of being very serious and very fun at the very same time,” she said.

Mr. Anghilante enjoyed that the show was family friendly, without inappropriate content. He also appreciated seeing people of very strong faith depicted in some of the story-based dances. In fact, some of messages he felt were not heard often enough.

“I liked a lot of the message that it had,” he said, finding the whole performance colorful, enjoyable, and uplifting.