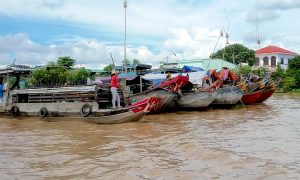 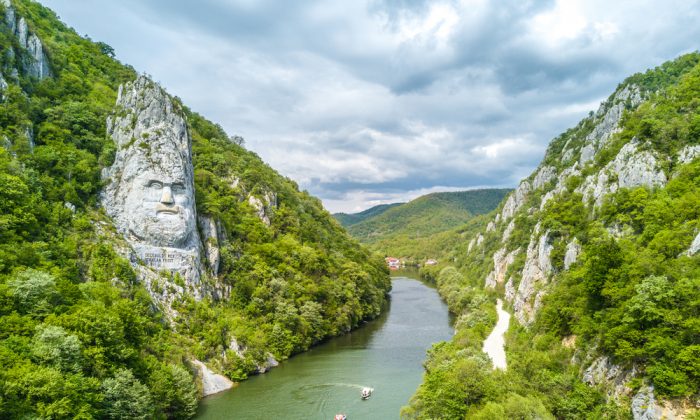 Sailing Through the Danube’s Iron Gates

Between Romania and Serbia, a dramatic landscape awaits
By John M. Smith

A major scenic highlight of any cruise through Eastern Europe via the Danube River is the dramatic landscape that greets you through a set of gorges that separates Serbia and Romania. I was able to enjoy this spectacular section of the river for myself on my recent Gems of Southeast Europe cruise with AmaWaterways.

Broadly speaking, the Iron Gates encompass an 84-mile section of the river, which consists of some very narrow gorges and some wide basins, with massive rock cliffs rising up on both sides. Before the river was dammed, these narrow gorges contained very treacherous rocks, rapids, and whirlpools, so navigating through there had been extremely dangerous.

Two gigantic dams (Iron Gate I and Iron Gate II), hydroelectric power stations, and navigation locks were constructed. As a result the water level of the river rose very significantly—about 130 feet. This, in turn, caused certain villages that had been in existence along the riverbanks to end up underwater, and the inhabitants obviously had to be relocated. At the same time, the area became much safer and more navigable. Now there are many cargo vessels and cruise ships seen along this stretch of the Danube River.

A Series of Gorges

The first narrowing is known as the Golubac Gorge, and it’s located just beyond the Romanian isle of Moldova Veche. Here I found a medieval fort located on the Serbian side, Golubac Castle. The next gorge I encountered is Gospodin Vir, and the cliffs reach an incredible height here of about 1,600 feet. The third gorge that’s located along this section of the route is known as the Great Kazan, and it’s the most well known and the narrowest of them all; here the river narrows to about 500 feet and reaches a depth of approximately 175 feet.

As I cruised through this section, which connects the Great and the Small Kazan gorges, I saw an ancient Roman plaque, the Tabula Traiana, which commemorated the Roman emperor Trajan. This marker was placed here about 2,000 years ago when Trajan had a road constructed to the former kingdom of Dacia.

This marker had to be moved when the river level was raised, but it’s still very accessible and easily seen by those passing by. I also saw a gigantic face of Decebalus, a Romanian hero who fought many battles with the Romans. This awesome sculpture was carved into a rock on the Romanian side of the Danube. Also nearby was the picturesque Mraconia Monastery, a small chapel that was built to replace the original monastery that was lost to the rising waters caused by the dams. The final gorge, located just past the Orsova Valley, is the Sip Gorge.

As I cruised through this dramatic landscape, from end to end, I noticed that there were many caves that lined the rock walls of the Iron Gates. I also passed some thickly forested areas, mammoth rock faces, old castles, and tiny villages.

I marveled at the nearby train tracks and roads that often seemed to hug the shoreline. It would have been quite the engineering undertaking to build these, and I saw many tunnels that had been cut through the sheer rock. At times, I noticed that the motor vehicle traffic would be backed up for quite a distance, for some of the tunnels only had one-lane accessibility.

The two major locks were more than 50 miles apart, and both lock entries seemed to attract many of us cruisers to the top deck of our cruise ship for an up-close and personal view of this maneuver. It was quite a sight to see the dramatic change in water level as we sat in the lock itself! Eventually, we emerged and continued on our way.

Cruising Through the Iron Gates

As I reflect back upon this exhilarating portion of the Danube River cruise, I have to agree with our cruise manager, Florentin Blidaru, for he told me that this section, through the Iron Gates, was the most scenic portion of the entire cruise.

It would be possible to experience this area by road or rail, too, but I tend to think that to really experience the Iron Gates in all of its incredible splendor, including its shoreline caves, riverside structures, enormous locks, and towering cliffs, cruising is the way to go.

John M. Smith is a Canada-based travel writer and photographer who enjoys traveling the world and then writing about his adventures.

The author was a guest of AmaWaterways.