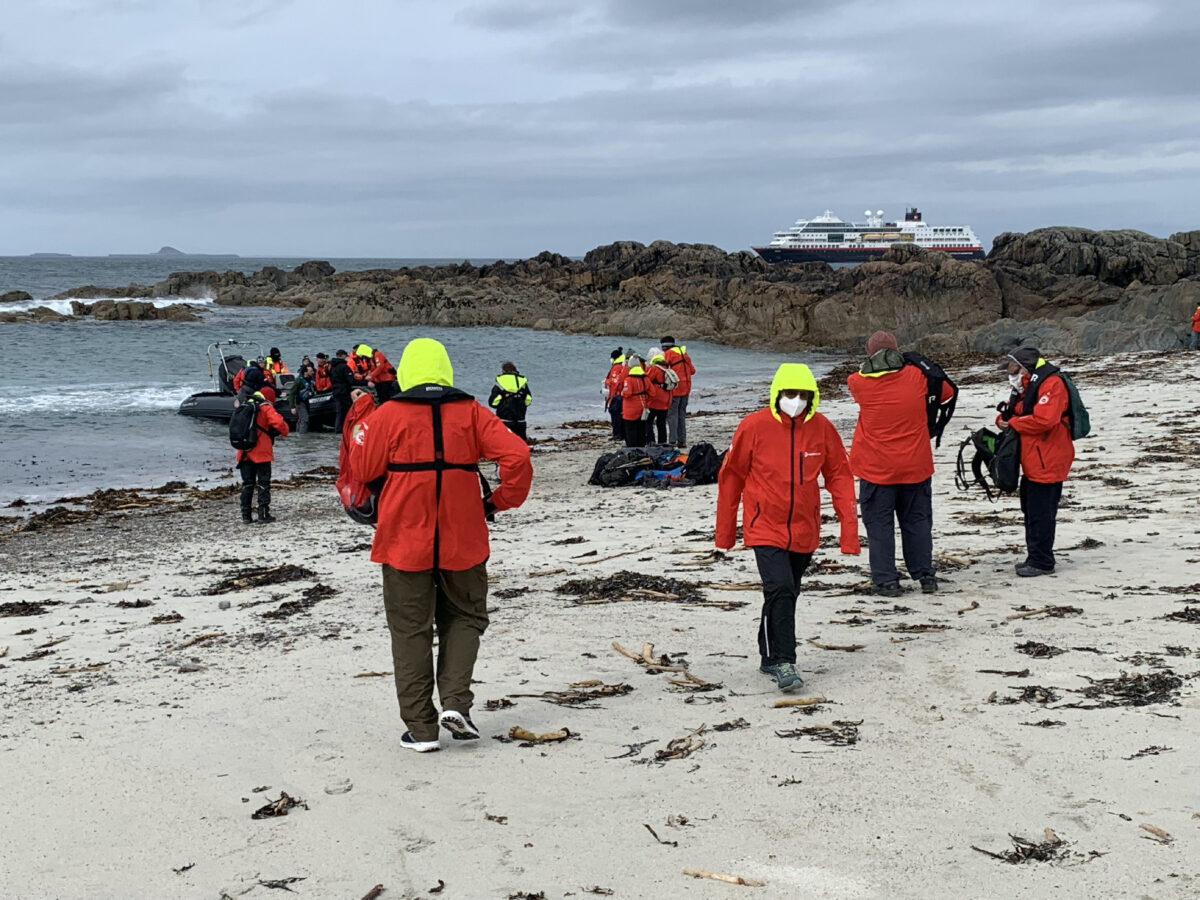 After a blustery day on the Scottish island of Iona, Hurtigruten passengers approach the Zodiac RIB that will take them back to their ship. (Photo courtesy of Sharon Whitley Larsen.)
Travel

Sailing the British Isles on the Hurtigruten Expedition

“Where’s our ship?” I asked my husband, Carl, in panic as we trekked to the tiny tender pier on the Scottish Isle of Iona. I couldn’t see it anchored where we had left it just hours earlier via a Zodiac rigid inflatable boat (RIB) in the nearby sea. The chilly wind blew through me after I had been trampling around the island and visiting the restored landmark sixth-century abbey. Cold and tired, I was ready for some warm soup and a glass of wine (maybe even a whisky!) once back aboard our ship, the Hurtigruten MS Maud, on which we were sailing for 12 nights. And which now was missing.

Several months earlier, when Carl had perused the Hurtigruten website, he read aloud the British Isles itinerary, which was an inaugural cruise sailing up Britain’s west coast with stops at small islands that most of us haven’t even heard of. I jumped on it.

On boarding day in Dover, England, we waited patiently in line for our COVID-19 tests. An octogenarian couple in front of us tested positive and were not allowed to board. Normally the ship has capacity for 500 passengers; this boarding had 222 (mostly British and only 17 Americans) on this inaugural sailing. (During the cruise, four passengers and two crew members tested positive for COVID-19 and were quarantined for five days in isolated cabins.)

As we gradually learned, this wasn’t your typical cruise: Most of these remote tiny islands and their picturesque towns had no Costco, McDonald’s, Starbucks, shopping malls or theaters, and they rely heavily on ferries for delivered goods. Even medical care can be scarce. (“If you’re going to be sick, be sure it’s on a Wednesday,” my driver-guide on the tiny Scottish Isle of Eigg told me on a previous trip: “That’s the day the doctor arrives by ferry.”)

There were no children on board, and most passengers were elderly. One man, traveling alone and using a cane, was 89. Our cabin was rather Spartan (twin beds at an angle) but had an adequate WC with shower and ample storage. (A massive ship renovation is scheduled for 2023.) We had a porthole and could watch other passengers strolling the deck outside.

There was no evening entertainment—despite a grand piano in one lavish bar area where we hoped someone would play and sing. Also, no spa—just a sauna and two outdoor hot tubs on the top deck. There was one small gift shop that offered nice items, and onboard lectures offered by experts covered topics such as birdwatching, climate issues, and sea life.

The crew members, mostly from the Philippines, were very friendly and so glad to be back to work after two years at home. And the food was excellent, with ample pours of wine at lunch and dinner.

We were given complimentary bright orange Helly Hansen parkas, and passengers had to wear life vests each time we went out on the Zodiac RIB tender, which was quite the challenging experience. We also had to wear masks indoors except for when we were in the dining room.

Our first stop after a sea day was in the fishing village of Fishguard, Wales (population 5,400). We were the first cruise ship to stop there in two years, and a small, smiling, hospitable group (including the mayor) turned out to welcome us with complimentary “Croeso i Gymru—Welcome to Wales” tote bags.

Back to spiritual Iona: We had tendered in on a Zodiac RIB, figuring if an 89-year-old using a cane could get on and off the bobbing “boat” so could we (with help from the youthful Expedition Team). Our ship was anchored just off the coast.

By the time we returned to the pier three hours later, I could see in the distance a few other passengers wearing the bright-orange parkas milling around. A crew member must have seen my panicked expression and called out to us: “The ship has moved!” Due to high winds, the ship had pulled anchor and sailed around to the other side of the island.

“You can walk to the beach to board the tender, or we have called for a taxi if you want to wait,” he said.

After about 45 minutes, a taxi (no doubt the only one on the island) showed up and we jumped in with the 89-year-old trouper and two other passengers. The driver dropped us off a few miles away at a gated pasture with grazing Highland cattle. We could see our ship in the far distance. All I could think of, since we were wearing the parkas, was being chased by the horned cattle.

Once we trampled through the green pasture, a steep trail led to the sandy beach below. The ship’s crew helped passengers into the exposed Zodiac RIB via a step stool as they waited for waves to recede. One woman removed her boots and walked barefoot in the chilly water as others had their shoes or pants soaked. I was so happy and relieved to get back on board the ship.

Out of 25 cruises we have taken around the world, this was the most unusual—truly a once-in-a-lifetime experience. Would we do it again? Probably not. But we’re glad to have had the experience.