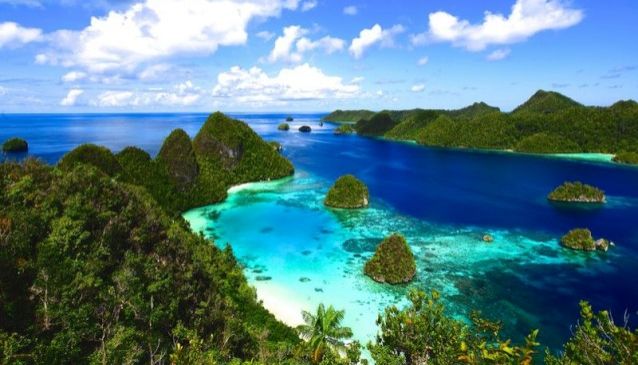 The Indonesian seas east of Bali will again host a huge maritime event which this year will be centred around the paradise islands of Raja Ampat, West Papua – Sail Raja Ampat 2014.

This follows previous successful events designed to develop tourism to this area: Sail Bunaken in 2009, Sail Banda in 2010, Sail Wakatobi-Belitung in 2011, Sail Morotai in 2012, and Sail Komodo in 2013.

The highlight of the events will be at Waisei Torang Cinta Beach on the island of Waigeo at Raja Ampat on 23rd August 2014, which will be attended by the President of Republic of Indonesia, H.E. Susilo Bambang Yudhoyonu, who has spearheaded tourism growth in this previously under-developed eastern part of Indonesia.

The water is crystal clear (MyDestination.com)

The international sailing event is expected to attract more than 3,000 visitors from all over the archipelago and from Malaysia, Australia, the Netherlands, Thailand, the Philippines, U.S.A and more.

On a recent visit to observe preparations, Minister for Tourism and Creative Economy, Mari Pangestu underscored that one principle reason for hosting such Events on far flung islands is to accelerate development. In order to support tourism development at Raja Ampat, the airport at Sorong – jumping off point to Raja Ampat – has been renovated, roads and infrastructure improved and access eased. All these are aimed to benefit the local population.

MORE: Bali and Beyond

Minister Pangestu added that Raja Ampat, with its wealth of marine biodiversity located in the heart of the world’s Coral Triangle, must remain an exclusive tourist destination so as not to destroy its pristine environment. Today, the area is visited by around 15,000 privileged tourists per year, and this will be limited to only 50,000 per year.

Highlight of the festivity is the Sail Past of warships, among which will be 25 Indonesian Navy ships as well as vessels from other countries.

Raja Ampat or the ‘Four Kings’, is the name given to the islands off the western coast of the large island of Papua. The four major islands found here are Waigeo, Misool (home to ancient rock paintings), Salawati and Batanta.

Divers flock to this region, since it offers the world’s most spectacular underwater life. Here underwater enthusiasts will swim with mantas, whales, turtles and other large sea mammals. The territory within the islands of the Four Kings is enormous, covering 9.8 million acres of land and sea, home to 573 species of corals, more than 1,427 species of fish and 699 species of molluscs. This makes it the most diverse living library for the world’s coral reef and underwater biota. According to a report developed by The Nature Conservancy and Conservation International, around 75% of the world’s species live here.