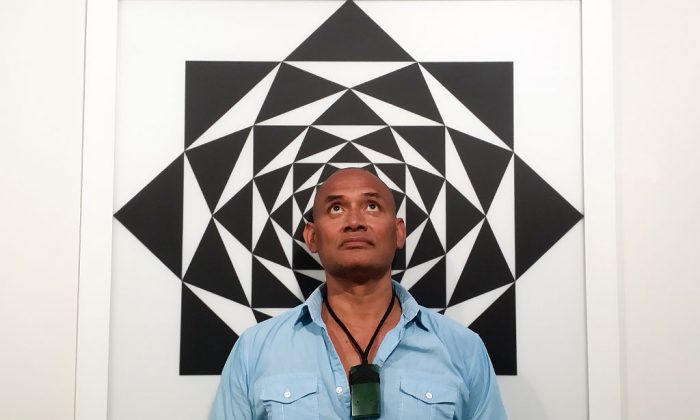 Artist Uili Lousi with his piece, “The Secret of the Golden Flower,” 2010. Acrylic on perspex. (Courtesy of Uili Lousi)
Arts & Culture

NEW YORK—It’s late summer on West 55th Street, and a spot of sun is fading fast over the tops of the skyscrapers. Uili Lousi, visiting from New Zealand, unfolds a newspaper and sets it on the pavement. He gets down, folds his legs into half lotus, and drops into a state of calm.

“New York is the best place to test your spiritual life,” Lousi said. “Forget about retreats. Here, you’ll really see whether you’ll make it or break it. We all have the capacity within ourselves to be the highest beings. Somehow along the way we forget and limit our way of seeing things.”

Though Lousi has made himself at home here, getting up the gumption to come to New York was a process. Having made the switch from philosophy and an established career in the health and fitness fields to full-time art at the age of 38, Lousi had long nursed the idea of going to New York to launch his new career, but was emotionally blocked from taking action.

It was in an intense meditation session in September 2013 that he saw his own fear—fear of financial uncertainty, of breaking into a new industry, of failure.

“There were 25 of us, and we were going to do this meditation for one week. We had signed [an agreement] that we can’t walk out. I saw the whole landscape of New York, the places I’d visit, the people I’d meet. It was like déjà vu, only there was no sound—it was like a moving picture, a silent film.”

Sitting there with this scene swirling in his mind’s eye, tears fell in torrents. Mulling it over afterward, Lousi battled with his doubts. One day while driving his 7-year-old son Aliki (whose name means “Divine Chief”) to school, he brought up the idea.

“What would you say if Daddy went to New York for several months?”

As Lousi recalled, Aliki thought for a while and replied, “I will miss you. But the world needs to see your art.”

With Divine Chief’s blessing, Lousi set out, several oversized artworks in tow, no plan in mind except for the end goal of having an exhibition in America’s art capital.

The Order of the Universe

Lousi remembers growing up on the island of Tonga and being overcome by a divine feeling as he gazed up at the lashings on the roof of the church house. Ropes wound round and round long, crisscrossing rafters, binding them together in precise geometric harmony.

In the South Pacific, weaving, rope making, and lashing are the major visual art forms. Together with dance and music, they best embody the spirit of the people.

“With no written history, the art has been the main way to restore and preserve the culture,” Lousi said.

As art, culture, and critical anthropology professor Okusitino Mahina wrote in an essay on Lousi’s art:

“All these fine and material arts are concerned with the intersection, that is, connection and separation, of lines/times and spaces, the symmetrical mediation of which involves a transformation from a condition of chaos to a state of order through sustained harmony to create beauty.”

Lousi’s art is based in large part upon the royal motifs found on woven bark cloths, called tapa. The motifs are many, and few people, even the elders, know specifically what each means. Lousi studies, modifies, and “unlocks” traditional motifs, reconstructing them with paint on canvas, or more recently, by layering pieces of cut glass.

The end result is flat but not flat, as if viewing an Indian stepwell from above. As the viewer moves around them, these 3-D wall pieces seem to shift slightly as the neatly aligned edges visually break.

The first such piece he completed is named “Aliki’s Peace,” in honor of his son. At the center is a group of concentric squares, alternating in black and white. Lousi usually works in only two colors per piece, each color symbolizing space and time, form and content, and other aspects of the universe’s duality.

Extending outward, the entire piece is a dissection, reversal, and repetition of the central square.

Lousi describes this central motif as “the square within squares beyond squares,” representing completion. Its sides and corners extend in eight directions, like the sea, and also inward, upon itself. In a way, it is cartography of the cosmos.

People may at first glance categorize Lousi’s art as abstract. But because it draws upon ancient traditions, it resonates with something innate and universal. Many motifs are not native to only Polynesia, but also to China and Japan, Greece, and the Americas.

Might it be that shapes and patterns contain in themselves a secret, universal language?

On a Thursday night in early July, Katherine Romaine Mawson is waiting for the westbound M23 crosstown bus at Sixth Avenue. She had just finished a yoga session and picked up groceries from Trader Joe’s.

Mawson did a double take when she noticed that the man standing next to her wore a gigantic green stone around his neck. She guessed he was from New Zealand. She herself had on a carved bone pendant from her native Wellington.

“You have something for me,” he said.

She didn’t know what he was talking about. Maybe he was just another crazy New Yorker. But he seemed convinced. Clearly this was a man who marched to the beat of a different drummer. At any rate, he didn’t appear threatening.

Having identified each other as fellow kiwis, they got to talking about the Maori New Year, which was just taking place. Mawson handed him her card and asked him to email her. On it: her title, Event Planner.

Before the month was out, she had helped Lousi open an art show at Gallery MC on Manhattan’s West Side. Lousi also needed a place to stay. Mawson put him up for two months.

It seems that invisible hands guided Lousi every step of the way.

Having secured an event space, Lousi’s next challenge was getting four oversized artworks released and transported from customs at JFK. A porter approached Lousi and said that his shift had ended hours ago, but stayed behind with the feeling that there was someone he needed to help.

Through a kiwi connection, Lousi was introduced to Saatchi & Saatchi senior curator Jane Sutherland and CEO Kevin Robert. The advertising agency is under the same umbrella as contemporary art enterprises Saatchi Gallery and Saatchi Art.

On a bus, Lousi felt compelled to speak to a man who turned out to be a subscriber of this publication, the Epoch Times, and through him was eventually put in contact with this reporter.

Flying by the seat of one’s pants is certainly a legitimate way to do business in New York. In the ’80s, Mawson was an aspiring artist herself, fresh in the city where her only contact was an old pen pal. She too often found herself dependent on the kindness of strangers.

But she was young and just out of university. Lousi has a son to think of.

“To be making such a step at this point—it’s brave at any point—but it’s a bigger risk,” she said.

Having gotten to know Lousi, Mawson is struck by his dedication and his willingness to carefully weigh his next steps.

“He’s always measuring possibilities against how Tongan art can be best served,” she said. “His commitment to his heritage gives him a confidence and openness he would have otherwise not had. He has decided that he wanted to honor something inside of himself.”

As of this publication, Lousi is bound for New Zealand to prepare for the next leg of his artistic journey. Lousi’s next New York exhibit is scheduled for April 29–May 12, 2015 at Gallery MC.

See a video of Uili Lousi introducing his art: