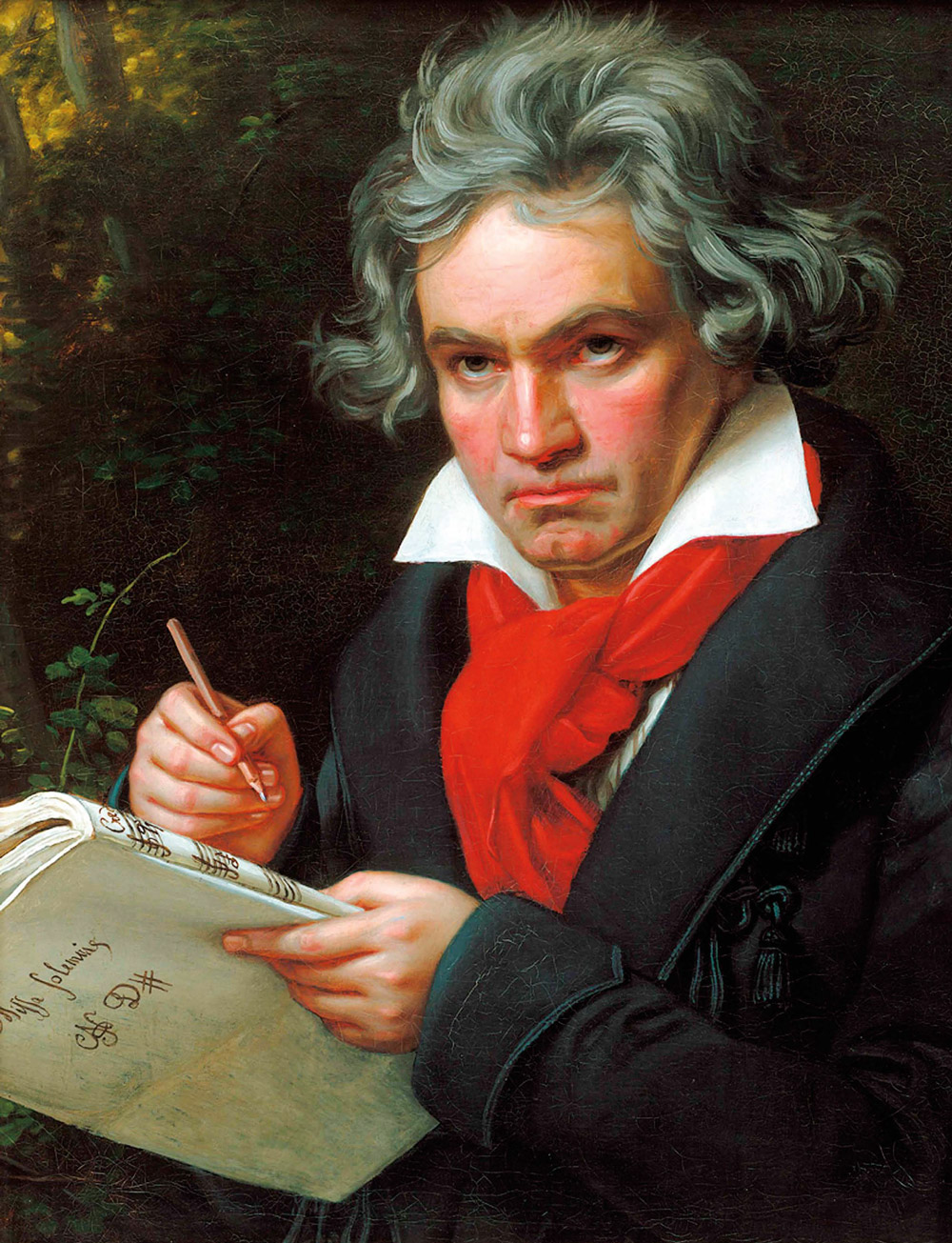 I am actually still shaking. I just listened to Beethoven’s “Fifth Symphony”—again—and it is simply apocalyptic! The fantastical, audacious bombast elicits an almost nervous laughter. It is thrilling and enthralling, truly and utterly stunning—the signature work of a singular man, a man with visionary clarity and absolutely zero time for ambiguity. That man is Ludwig van Beethoven.

It is almost impossible to think of Beethoven and not mention Mozart. While Beethoven was certainly following in Mozart’s footsteps, he was unquestionably charting his own very distinctive course. A brief comparison of these two giants might be really useful in understanding who Beethoven was.

One main difference was Mozart’s regular use of alternating major and minor scales. Minors are commonly understood to be sad. Mozart’s technique of alternating between them changed the color in such a way that took the sadness and made it feel delicate, sensitive, or thoughtful. For Mozart, the sunshine is never far away, and is almost always about to peek through the clouds.

With Beethoven, however, you are never in any doubt about his intent. Mitsuko Uchida, renowned concert pianist, called Beethoven “premeditated,” because he used shock tactics by design. You are either staring into an abyss of sadness, or galloping—flag on a staff—into war on the back of a horse. That might be a slight overstatement, but Beethoven makes a decision and stands by it. It is equally rewarding and surprising, but there is much less room for equivocation.

Beethoven was a man of clear perspectives and objectives. He had a glorious vision of a universe of unimaginable scale, and he painted that glory in a way no one else could. Take a listen to the “Fifth Symphony,” with full orchestra, and see if you can think of any other piece of music that comes close to that bold, terrifying power. It is such a phenomenon, that even the heaviest of modern heavy metal just wilts in comparison.

“Sonata No. 14,” better known as “Moonlight Sonata,” brings me to tears every time I hear it: It is a hypnotic lament of such deep, searing beauty and utter sorrow. Beethoven took the commonly “polite” form of the sonata into unheard of emotional territory. Even the brief movements to G-sharp major seem hardly able to let in any light. And in some ways, classical music actually grew up because of it. Beethoven delivered dramatic angst rather than the gentle compassion of Mozart, and that unambiguous drama sets the two apart.

The fact that Beethoven was known to suffer from debilitating tinnitus, and was slowly going deaf, certainly contributed to the determined nature of his music. He spoke often of his fear that time was running out. By the time his “Ninth Symphony” was performed in Vienna in 1824, he was profoundly deaf.

It is impossible to conceive of a greater tragedy: that the man who composed music of such startling brilliance and yearning beauty would never actually hear it. It speaks to the indomitable power of the human spirit that seems ever present in his work. Beethoven himself had to overcome a difficult childhood, and he struggled with his health, but he maintained a determination to become a composer—an artist—in his own right.

Aware that public knowledge of his deafness could destroy his career, he withdrew into his music, living for a time almost as a recluse, determined to bring forth whatever music was left in him. One can hardly imagine the utter despair and desperation that must have been driving him. But somehow, he managed to pull himself back from the brink. Resigned to his fate, he composed his “Third Symphony,” or “Eroica,” as a defiant response. This piece thoroughly eclipsed the majesty and complexity of his previous works, and was received to wide acclaim as a masterpiece. He later wrote, “Let my deafness no longer be a secret.”

Then, just before Christmas in 1808, Beethoven gave a concert at the Theater an der Wien, in Vienna. Remarkably, he was to perform five major new works. Among them where the “Pastoral Symphony,” the “Fourth Piano Concerto,” and the “Fifth Symphony,” some of the most important music ever written—all to be debuted on that single winter’s night!

His finances where precarious, his health in decline, and yet, he delivered one of the most challenging concerts any audience of that time could have been expected to understand. To the very end, he would be uncompromising and defiant, choosing to live or die by the conviction he had in his music and in himself as an artist. The audience was enthralled. They loved it. He had proven himself to the world, and those compositions—icons of musicality—stand as testament to his absolute genius.

Soon after, Beethoven would have to give up public performances due to his health and increasing deafness. He still ended up composing some of the most astonishing, visionary music ever written: “Fidelio,” the mystifying “Hammerklavier,” the later “String Quartets,” and the incomparable “Ninth Symphony” among them. Typically groundbreaking, Beethoven’s “Ninth” was the first time a choir had been included in a symphony composition—and it is thunderous.

Beethoven was a difficult man, a man given to outbursts bordering on insanity. Though arrogant and stubborn, it is almost impossible to imagine that any other kind of man could have survived the road he was destined to travel and write with the passion and majestic audacity that was his ambition. He strove to rise above the sordidness of life, and through his music, bring us with him. Inwardly he was a deeply spiritual, religious man. He wrote that he saw God in all things and all things in God.

Upon the elevation of his patron, the Archduke Rudolf, to the position of Archbishop, Beethoven was commissioned to write the “Missa Solemnis,” the “Solemn Mass.” He considered it to be the most glorious day of his life, and this composition would be a monument to the miracle of human unity and faith. Through this work, he would be the advocate for humanity before God.

As such, the parts he wrote for the choir at the end of the “Credo” movement were almost impossible for any human being to sing. In Beethoven’s articulation of a glorification to God, the choir would be forced to give everything humanly possible, and then to strive beyond that, push higher, and then strive again—as he himself had always done. Much of his work had this humanist, spiritual intent. The “Ode to Joy,” from the “Ninth Symphony,” as another famous example, has been sung by oppressed people all around the world as an expression of hope: from the African Congo, to Chile, to the Berlin Wall, even by the protestors in Tiananmen Square, in China.

Beethoven, Bach, and Mozart were the bridge between the Baroque and Romantic periods. Between them, these men explored, and exhausted, almost every possibility of musical expression. It has been said that, by design, Beethoven’s last “String Quartet” compositions left absolutely nothing for the Classicists to say—any musician who followed him would have to find a new way. I think it’s entirely fitting that this man (whose music often left people speechless) with his last works, would challenge his successors to pick up his audaciously placed baton, and have something new to say.

Pete McGrain is a professional writer/director/composer best known for the film “Ethos,” which stars Woody Harrelson. Currently living in Los Angeles, Pete hails from Dublin, Ireland, where he studied at Trinity College.

The “Passions” of Beethoven: The Story Behind one of his Beloved Piano Sonatas

Beethoven had been invited to a Viennese nobleman’s house for dinner. Vienna, at this time, was occupied by Napoleon’s troops, and occupying French officers were present at the dinner. The host implored Beethoven to play for his guests, but he demurred. Then, after an awkward scene, Beethoven stalked out of the house in the middle of the night—and in the middle of a storm. He walked the dozens of miles home that night in the pouring rain. He had a manuscript under his arm that night, the score to his latest Sonata, the “Appassionata” (formerly titled “Piano Sonata No. 23”). That manuscript can be seen, to this day, in Berlin. You can still actually see the streaks the rain made on the notes of the score that night. Beethoven was real. He is not a myth or an abstraction from a dusty portrait—he was one of us.