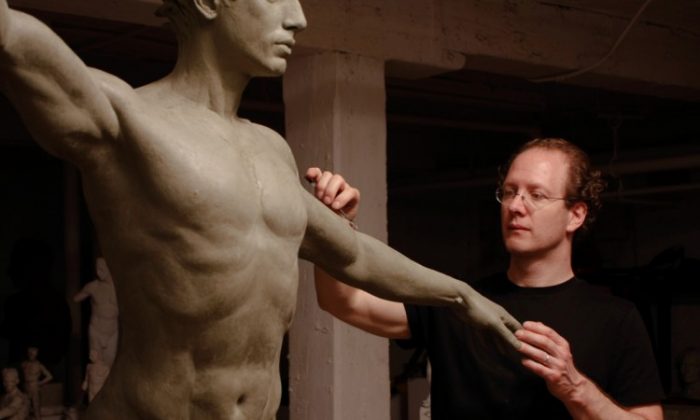 NEW YORK—Entering Sabin Howard’s studio in the Bronx is a unique experience. Through his lifelike sculptures, the gods’ penetrating stares are both humbling and uplifting.

“Collectors like them for their homes because they change the energy of a room,” said Howard.

Howard, who has spent his life between Italy and New York, stood in front of a sculpture of Apollo—God of the Sun from the Greek and Roman tradition—with perfect physique and graceful pose.

“You can see I extended the sternum and lifted it up toward the sky, so there’s more luminosity coming onto the chest—and that’s where your heart chakra is—then the openness with the arms stretched outward. It’s really about the possibility of what we can be,” Howard said.

The Apollo sculpture alone took Howard more than five years and $85,000 to produce, including materials and paying two models to pose for long hours.

Reflecting on Howard’s work, Stefano Acunto, chairman of the Italian Academy Foundation (IAF), said, “The word ‘masterpiece’ in Italian is ‘capolavori’—’lavori’ means to labor, to work. And you really see that in Sabin’s sculptures.”

The hard work paid off. After Sabin makes a first sculpture, he can create a mold and is able to make a series. With around 180 collectors worldwide, he sold the first three in the Apollo series for within the six-figure range and plans to create six more.

Presented by the IAF, Howard’s work, including his sculptures of Apollo and Greek gods Aphrodite and Hermes, will be on exhibit March 2 through March 22 at the Institute for Classical Architecture and Art (ICAA), at the institute’s historic West 44th Street headquarters.

Why does he often sculpt gods? “I pick titles that are universal, that can be understood by the community, and art is in service of the community,” Howard said.

Howard’s work is something that can be instantly appreciated for its masterful skill.

“The UPS guy and the fireman understand it; they walk in here and go, ‘Wow, this is real art,'” Howard said.

But his sculptures also stand in opposition to the many more abstract sculptures that have become the bread and butter of modern sculptors and the center of the contemporary art world.

“What Sabin is doing is so important because his work reflects on themes and techniques that are the basis of art, which are ignored so often in the production of contemporary art, which is more temporary than anything else,” Acunto said.

Howard, 48, said that the modern art of the last 50 to 60 years has gotten too entrenched in academic language.

“Now the conceptual part and the manual … [have] become more important than the art itself. So you read all this philosophy about the work, and there’s nothing wrong with that per se. But when that becomes more important than the actual object—and the actual object might be a pile of cinder blocks on the floor—then I have a problem because art represents me on a cultural level,” said Howard, who taught figure sculpture and drawing at the graduate level for 20 years.

Howard isn’t alone. His exhibit at the ICAA will open on March 2 with a panel that also features other leading exponents of classicism in art, including editor of Fine Art Connoisseur, Peter Trippi, and editor of American Arts Quarterly, James Cooper.