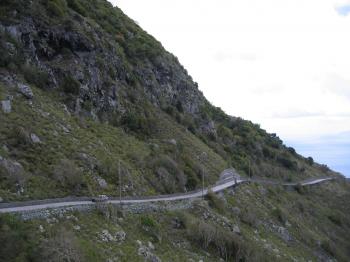 Great Road of Saba...the experts said it was “impossible to build”, so islanders did it themselves. (David Ellis)
Destinations

The Dutch are marvels at creating engineering wonders on their home turf, but when they were asked back in the 1940s to build a road around and over the tiny island of Saba in the Caribbean’s Netherlands Antilles, they studied it long and hard and decided: “Nee—this is impossible,” and went home.

Unfazed, the entrepreneurial Sabans who lived on this jumbled collection of rugged peaks and deep valleys agreed that they wouldn’t take no for an answer and that they would build the road themselves.

They were led by a remarkable 40-year-old carpenter, Joseph Hassel, who knew nothing of road making and so enrolled in a five-year course in the subject … by correspondence.

While he was studying, he and Saba’s barely 1,000 other residents planned their road to villages, isolated farms, and communities on the tiny five-square-mile island, and decided that every able-bodied man, woman, and child would contribute set hours of voluntary roadwork every week.

Then armed with little more than picks, shovels, rakes, buckets, and spades, they took 25 years to build their concrete masterpiece that some of Holland’s top engineers said “was impossible.”

In most places, the tortuous artery rises and falls at up to 35 degrees and U-turns zippered to the craggy mountains almost double back over themselves—so that from the sea or air it cuts a similar line as China’s Great Wall and thus is dubbed “The Great Road of Saba.”

Forty-odd years after it was opened, the road—that’s never been given an official name beyond The Road—links the little port of Fort Bay with The Bottom (the village at the base of the largest mountain), picturesque Windwardside, Zion’s Hill, and the airport.

There are still only about 2,000 people who live here in delightful gingerbread houses that all have white-washed walls, red tile roofs, and green window shutters—enforced by law.

And old-timers will recall how, before The Road was built, to get from their wharf to their homes, they had constructed a series of ladders with more than 900 steps from sea level to link with mountain walking tracks and trails to their farms, homes, shops, and businesses.

Everything from groceries to furniture and farm goods was hauled in (and out) via these ladders and tracks, including—with the help of dozens of locals—an enthusiastic local musician’s full-size grand piano.

Saba gets around 25,000 visitors a year who either come by ferry, a few small cruise ships or by air … with the airstrip another marvel of local ingenuity. Once again, when told it would be impossible to build an airport on the island, the Sabans simply said “no” to “nee” and carved the top off one of their many hills, pushed it into the sea, and laid a runway across it.

You’ve got to have a stout stomach to fly in and no fear of heights to take one of the handfuls of taxi-vans around the island, as The Road in places clings precariously to cliffsides that fall hundreds of feet directly into lush valleys below.

The Sabans don’t encourage large cruise ships for fear of damaging their environment and being overrun by gawkers, and happily point out that anyway, they’ve got no beaches, no duty-free shops, no discount electronics, and virtually no transport beyond the few taxi-vans.

But they do have spectacular diving, extraordinary scenery, wonderful little stores selling hand-made souvenirs and exceptional lace goods, a couple of interesting museums, including one in a 160-year-old house, little cafés with delightful island-Dutch cuisine, including superb local lobsters, and “Dutch tea” (Heineken Beer) … and the opportunity to climb 1,064 steps to take in the spectacular vista from the highest peak.

There are also a few small hotels and guest houses—and if they’re all booked out, because Saba Police Station’s two cells have never housed a prisoner, the entrepreneurial police officers have turned these into an emergency peak-season bed and breakfast.

See travel agents about Caribbean Island ferry services to Saba and small holiday vessels, such as the SeaDream I and SeaDream II, that visit the island as part of Caribbean itineraries from November to March.