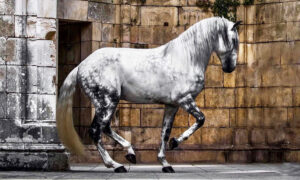 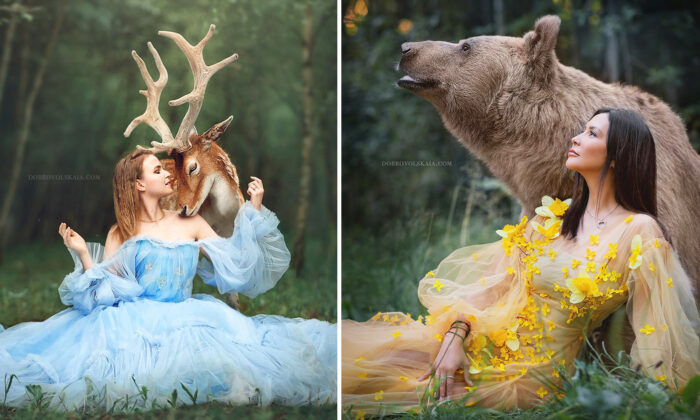 Anastasiya Dobrovolskaya, 30, is a Moscow-based photographer who pairs human beings and beasts in her extraordinary shots. Her work explores the connections between humans, often young women, and animals through her dreamy, almost magical portraits.

Those animals range from majestic horses, goats, and stags, to powerful bears, tigers, lamas, and even bats.

Perusing through her incredible portfolio, one might think she composes her shots using feature film special effects or CGI; but the subjects are entirely real, captured from her lens.

Anastasiya started her career in July 2018. She’d made three prior attempts to get her photography work off the ground but failed. Then she received an invite from a woman who needed a photo shoot with a rooster and a mini pig.

Though the artist had no experience photographing people and animals together, she took up the challenge and went for the shoot.

During the shoot, she did not even know how to handle the animals, as it was her first time.

“Should the chicken be on the floor? Or should I put him on the fence? The pig suddenly fell asleep,” Anastasiya recounted to Enchanted Living. “The only thing I knew was that I wanted those photos to look like fashion ones.”

The photos turned out marvelously and were recognized at the 35AWARDS international photography competition in 2018.

The first assignment was a success and she fell in love with that niche. Within a week, she had done additional shoots with an owl and a horse, with some of the photos going viral online.

The buzz motivated her to quit her job and concentrate on commercial animal photography.

“In my work I want to show the beauty of animals and their similarity to people,” writes Anastasiya on her website. “I try to find common features between people and animals so that animals become more respected by people.”

She further adds that her photos emphasize the beauty of human beings—particularly if their appearances do not fit the predefined societal mold.

Anastasiya has done numerous shoots with pets. There are specific photos that she considers particularly noteworthy.

Anastasiya gave her account of doing a photo shoot with Stepan, a 27-year old, highly-sought-after bear model that was rescued as a cub and raised by humans.

“It was a wonderful experience thanks to which made amazing photos,” Anastasiya said.

“Stepan is the cutest bear in the world; very loving and delicate. His story is an example of an endless love between people and an animal.”

The shoot with Stepan was inspired by the affection that Anastasiya witnessed between the bear and his humans.

“I wish that all people treated their pets like Stepan’s family have been treating him,” she said.

She has also done a shoot with an albino porcupine alongside a young woman with similarly fair and extraordinary features.

“I had never seen porcupines before and knew nothing about them, so I was really surprised by how extraordinary they are,” she told Enchanted Living.

“It looked like an animal that lives deep in the ocean but spoke like a very grouchy chicken.”

Perhaps the biggest challenge in her work, she says, is dealing with the occasional furry “diva,” with the beast displaying a less-than-cooperative temperament during the shoot.

“You can’t do anything about it. The only way out is to reschedule,” the photographer said. “The good news is that it happens very rarely because tasty food is a good compromise.”

She offers tips for artists who might be interested in pursuing her niche. Dogs, she said, have a very good sense of smell and the presence of a cat in the studio before the shoot might spoil the whole thing.

“Ravens are fashionistas and they like everything sparkling. So you better not wear bright earrings to a shoot or be ready to go out without them,” she added.