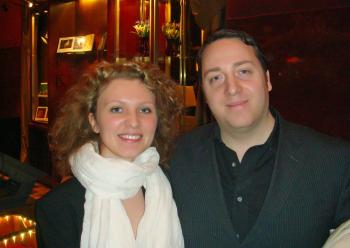 Attending the show with his wife was Mr. Germanovsky, who works in business development for Novoye Russkoye Slovo, the oldest Russian newspaper in North America, founded in 1910.

“I truly think the show is wonderful,” he said. “It brings us people who are not really from that part of the world closer to, the knowledge, closer to the path of this wonderful nation we come to know and love here in New York City.”

The Germanovskys were both born in the Soviet Union, under communist rule, so they felt a kinship with the Chinese people because of “this pressure, like from the Red Army,” Mrs. Germanovsky said. “Because religion was forbidden… you could not speak up… Russia and China, they're so far apart, but you know this way you feel.”

Mr. Germanovsky appreciated the Mongolian dancing, he felt it brought out his sentimentality because of its geographical location and connection to Russia. His wife agreed.

He appreciated that Shen Yun is “saving the [Chinese] heritage and teaching people who live here in the West…I see this is what Shen Yun in preserving, which is valuable I think, for everyone.”

Shen Yun was educational as well as entertaining, he said. “I actually found this interesting. I didn't know there was such a thing as the Miao people, which are [one of] the oldest ethnic groups, and when they announced that there's going to be something like that I had that feeling like, ‘Oh, maybe I'll come closer to understanding the roots of the Chinese culture.’ I had no idea there was such thing.”