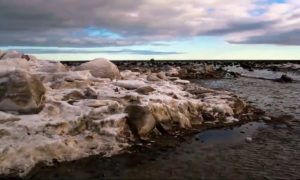 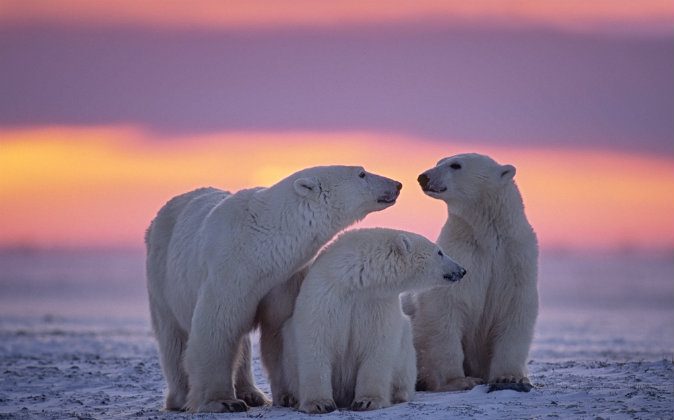 Running a Marathon in the Canadian Arctic

“Polar bear” someone yelled.  I whipped my head towards the window of the rickety school bus where I was sitting with thirty other adventurers on a tour of Churchill, Manitoba.

This was the starting point of my eight-day Cruise North expedition to the Canadian Arctic. In a few hours, we’d board our ship Lyubov Orlova, a Russian icebreaker, and set sail our Arctic Odyssey across the Hudson Bay, down the Hudson Strait, and finally to Kuujjuaq.

Whales and Walrus and Polar Bears, Oh my!

I’d signed on partly because the cruise promised icebergs, beluga whales, musk ox, walrus and polar bears, and partly because Cruise North is an Inuit-owned tour operator with Inuit staff onboard, and we’d be stopping at Inuit villages along the way; but mainly because midway through the voyage, there’d be a 26.2-mile marathon to be held on top of a 3,000-foot-high fjord.

Now, as I stared at the 300-pound polar bear foraging in the tundra less than 50 yards away, I hoped I wouldn’t have a personal encounter with one on that fjord.

Churchill is the polar bear capital of the world, our bus driver/guide said, but that’s in the fall when polar bears migrate out to the ice; this was July. That was one surprise. Another was that the temperature here was 90 degrees Fahrenheit, not the 50-degree average for July.

The polar bear disappeared down an embankment, and we continued on, stopping in front of a huge Inukshuk. These lifelike figures made of large stones have always been used by the Inuits to help herd caribou, indicate direction, and serve as both guardians and the Inuit symbol of the Canadian Arctic. They’re everywhere – in front of stores, in yards, at the dock where we boarded our ship.

As soon as I settled into my cabin, with its own bathroom and a porthole that opened, I grabbed my binoculars, and

scurried up to the top deck where many of the other passengers were shooting pictures of white caps in the distance.

A second look and I realized they were not whitecaps; they were  belugas! These whales, indigenous to the Arctic, are easy to spot because of their color.

Byelukha is the Russian word for white, and as the whales surfaced, their milky bodies glistened in the sun.  Maybe it wasn’t the season for polar bears in Churchill, but it was the right time for some 3,000 belugas that migrate there every summer before entering Hudson Bay.

The expedition staff, trainees, and lecturers sat with us at meals and at any time we might find ourselves next to a naturalist, ornithologist, botanist or one of the Inuits.

There were also daily lectures on every subject from polar bears and arctic birds to the history of whaling and Inuit culture. At the first dinner, in the middle of eating a delicious Atlantic char, I began to feel the ship sway.

Henry Hudson, for whom Hudson Bay was named in 1610 while searching the Northwest Passage, didn’t know what he found or what he was talking about.

This is no bay. This is a body of water, 900 miles long and 600 miles wide that leads to the Arctic Ocean, and at this moment, in the middle of my dinner, it was acting like an angry ocean. I popped a seasickness pill.

The Great MigrationThe next morning, feeling like a zombie from Dramamine, I read an article on the bulletin board:  “The first people to have migrated out of Africa to modern day Middle East and Mediterranean did so 100,000 years ago. The first people to reach the Bering Straight in modern East Russia got there 18,000 years ago and crossed over to North America.

READ ALSO: The 10 Best Places in the World to Run a Marathon

“They are thought to be ancestors of Native American Indians. The early ancestors of the Inuit are believed to have crossed the Bering Straight 10,000 years ago, migrating from the area currently known as Mongolia.

“It seems unfathomable to think all the world’s people simply went about roaming the earth ceaselessly. Yet, the logistics of such a migration offer a realistic perspective. The circumference of the earth is approximately 40,000 kilometers (about 25,000 miles).

If we take a conservative estimate of 80,000 years of migration, the people pushing eastward out of Africa would have had to move only half a kilometer a year to cover the distance of the earth in a straight line.”

After breakfast, I stood outside on the deck, looking out at the endless sea. There wasn’t another vessel in sight because hardly anyone comes here by ship.

We were to be at sea all day, and there were a series of lectures beginning with “Intro to the Arctic.” Only 10% of the Arctic icebergs come from Canada – the rest are from Greenland.

During “The History of Whaling,” Richard Elliot, the naturalist from the American Museum of Natural History told us that the narwhale is also known as a unicorn, and its one ivory-like tusk can grow to eight feet. The beluga was once hunted for its skin, especially for white beluga shoelaces.

After, I donned a fleece, grabbed my book, and found a wind-sheltered spot on deck because the temperature had dropped to 53 degrees.

There’s something so meditative about sitting in the warm sun, watching the horizon, the ship gliding up and down on the inky waves, the water sluicing against the hull.

But I didn’t read much because I kept talking to the other passengers on deck. Most were from Canada, though there were a few people from England, Belgium, France, and one couple from America.

But the ones I bonded with right away were the eight who planned to run the marathon. They were serious racers who’d each racked up anywhere from 16-52 marathons. I’d only done two, and that was eight years ago.

The first Cruise North Arctic Marathon took place two years ago on the plateau of a 3,000-foot fjord with four full marathoners, a couple of half-marathoners, and a few relay teams.

Jay Glassman, the race director who also heads the Toronto Marathon, and was on board, told us that the Arctic Marathon is the fastest growing marathon in the world, because this year, it more than doubled the number of full marathoners to nine.

Even though I had fewer marathons under my belt, it wasn’t the kind of race I needed to get nervous about.

Wearing our wet gear and rubber boots, we were taken to shore by Zodiac (a rubber motorized dinghy), and from there by truck, a couple of miles up the road to the top of the fjord.

The out and back course (13.1 miles each way) was held on an old mining road with gently rolling hills (which felt as though they only went uphill in both directions).

There were no spectators, but Inuit volunteers from Kangiqsujuaq, a village three hours away, had come out early to build Inutshuks out of rocks at each kilometer marker. They manned the water spots every four miles, and cheered us on.

The average time was four hours and change. I was out much longer because I hurt my foot on a rock. That left me little choice but to walk the entire second half of the race.

We were having another hot day – a good 85 degrees, and besides it was above the treeline, there was no shade. And, there were no spectators.

Copyright © 2014 by Go Nomad. This article was written by Margie Goldsmith and originally published on www.gonomad.com