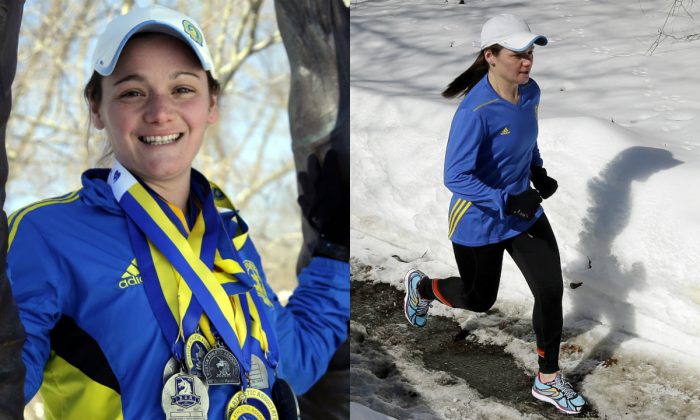 In these Feb. 27, 2015 photos, Becca Pizzi in Newton, Mass. Pizzi, a veteran of 45 marathons, vies to be the first American woman to complete the World Marathon Challenge -- seven marathons in seven days on seven continents in January 2016. (AP Photo/Elise Amendola)
HK Life

BELMONT, Mass.—A Massachusetts woman is poised to kick off her quest to run seven marathons in seven days on seven continents.

Becca Pizzi (PEE’-zee), of Belmont, is heading to Antarctica this week. On Saturday, she’ll take on the first of her back-to-back 26.2-mile races.

This Inspiring, Blind Young Man Is Running the NYC Marathon to Save Lives

The 35-year-old day care center operator is vying to be the first U.S. woman to complete the World Marathon Challenge.

Pizzi is one of 15 competitors from around the globe attempting the feat.

Why These Experienced Runners Compete in the NYC Marathon

She told The Associated Press last month she plans to tap the endurance she’s developed from the 45 marathons she’s run in 27 states.

The final leg of the World Marathon Challenge is scheduled to take place at Manly Beach, Sydney. The course will be…