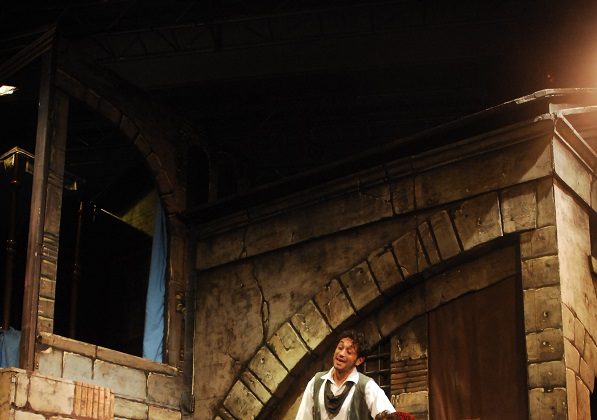 “Rugantino” is Still Enjoyable After All These Years

The Italian musical comedy “Rugantino” last played in New York for three weeks in 1964. For the 50th anniversary of the Broadway production, a revival returned to City Center (131 West 55th Street) for three performances (June 12, 13 and 14).

With a large cast, an impressive revolving set, singing and dancing and a lot of comedy (both verbal and physical), it was probably too much of a good thing since the show ran over three hours. On the other hand, no one could deny that the audience got its money’s worth and the cast deserved the standing ovation at the end.

The locale is Rome in the 1830’s. The title character is the sort of rogue who could have stepped out of Boccaccio’s “Decameron” or Commedia dell’Arte. When the action starts, Rugantino (Enrico Brignano, who also directed the production), is trying to pass off his ex-girlfriend Eusebia (Paola Tiziana Cruciani) as his sister.  His aim is to convince Mastro Titta, the executioner and local barkeeper (Vincenzo Failla), to marry Eusebia and then to support, or at least feed, Rugantino. Titta has a wife who abandoned him years earlier, leaving him with a dim-witted son. Rugantino, posing as a priest in the confessional, grants the executioner permission to marry Eusebia.

When the con artist comes across the beautiful Rosetta (Serena Rossi), he makes a bet with his friends that he can seduce her before the upcoming holiday, “the Evening of the Lanterns.” Most men are deterred from pursuing Rosetta because she is married to the violent Gnecco (Simone Mori).  He is jealous of his wife even though she rejects his advances. From her perspective, theirs is a marriage of convenience.

At first, Rosetta resists Rugantino’s charms as well. Then, in one of the many unlikely plot turns, she agrees to accompany him to Campo Vaccino (a secluded romantic spot). There, they fall in love and spend the night together. While Rugantino is initially reluctant to tell his friends of his conquest, he ultimately reveals the truth. Rosetta happens to be nearby and hears his boasting.

After Rosetta and Rugantino squabble, he makes a play for a woman he believes is a local prostitute. The woman is actually Donna Paritelli (Valentina Spalletta), the wife of a nobleman. The Paritelli’s are part of a group of wealthy aristocrats who play malicious practical jokes (for example, making prisoners believe they are about to be pardoned). The latest ploy is to entrap men who seek ladies of the night and throwing them into the river.

When Gnecco is murdered in front of his house, Rugantino stumbles on the body and takes the knife out of the corpse (just like Cary Grant in “North by Northwest”). Rosetta sees this and believes Rugantino is the culprit. For some strange reason (apparently because being labelled an assassin makes him feel like an important person), Rugantino confesses to the crime and is sentenced to death.

Rosetta has another inexplicable switch in attitude when she decides she is still in love with Rugantino. In a witty scene, the condemned man convinces Titta (his would-be brother in law) to be the one to execute him because he has a light touch. (This would seem to be irrelevant since the Romans used a guillotine at the time.) At the end, Rugantino bravely goes to his death with Rosetta weeping, a peculiar end for a comedy.

There were many funny scenes, several involving cats (one where Rugantino was forced to eat a cooked one and another where he stole the food from alley cats). Strangely, no dogs appeared in the show, nor children either. Brignano was light on his feet and equally facile with verbal jousting or pratfalls. Serena Rossi had the requisite good looks for the part of Rosetta and one of the best singing voices in the cast. Paola Tiziana Cruciani was amusing as Eusebia, who had doubts about whether she wanted to become the wife of an executioner, and Vincenzo Failla was immensely likeable as the fellow who spent 20 years waiting for his wayward wife to return and then fell for a woman he discovered was Rugantino’s former lover.

Armando Trovajoli’s music is pleasant if not always original. The opening chords by the orchestra (repeated at various points, including the end of the show) are right out of “West Side Story.” Probably the best song is the one about Rome (“Roma, Non Fa La Stupida Stasera”) just before the curtain fell on Act One.

The translations were projected on both sides of the stage and were apparently updated with such words as “supercool” and “dude.” The sets, costumes and choreography were worthy of Broadway or the opera house.  “Rugantino” is a worthy import but should be shortened for any future revivals.