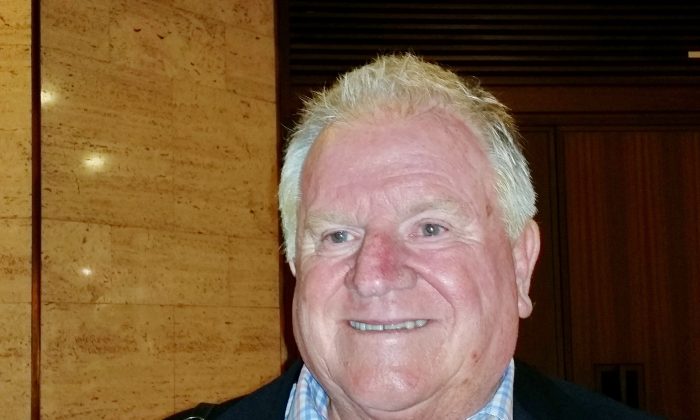 Based in New York, Shen Yun has classical Chinese dance at its heart, but also incorporates ethnic and folk dance, solo singers, an orchestra combining traditional Chinese and classical Western instruments, and a state-of-the-art digital backdrop.

The website explains, “The backdrops are magical windows to completely different realms. From vast open grasslands in one dance to the stately elegance of Tang Dynasty pavilions in another; from dusty yellow battlegrounds to tropical beaches to Himalayan peaks to picturesque scenery of the Yellow River Delta—the digital projection infinitely expands and transforms the stage.”

Mr. Dennis was particularly impressed by this part of the show. “The video effects of the back–magic, absolutely magic! Such a simple thing, but technically beautiful,” he said.

Mr. Dennis loved other aspects of the show too. “I enjoyed the voices, the vocals as well,” he said. “The orchestra was magnificent.”

Two emcees give a brief introduction to each performance in Chinese and English, which Mr. Dennis really appreciated. He felt Shen Yun provided an insight into the cultural background of China’s 5,000-year-old of history, and wanted to congratulate the performers and the whole Shen Yun team.

Mr. Dennis thought it was sad the communist regime has tried to wipe out China’s traditional arts and culture. “It’s a real shame that the heritage of China, a peaceful nation, was destroyed,” he said.

Currently Mr. Dennis is part-time manager for Special Projects with Scripture Union South Australia, and is also working on other projects called ‘Community Consults and Events’ and ‘Make it Happen’.

A Rotary Club member for over 30 years, he has been president three times. Other roles include being District Chair of Community Service, and serving on the Committees of Calperum, Preserve Planet Earth, and the Australian Rotary Health Indigenous Scholarships Committee to name just a few.

In 2005, Mr. Dennis won the Frank Stewart Distinguished Service Award for making a significant contribution to the development, promotion and advocacy of the parks and leisure industry through personal and professional endeavours.