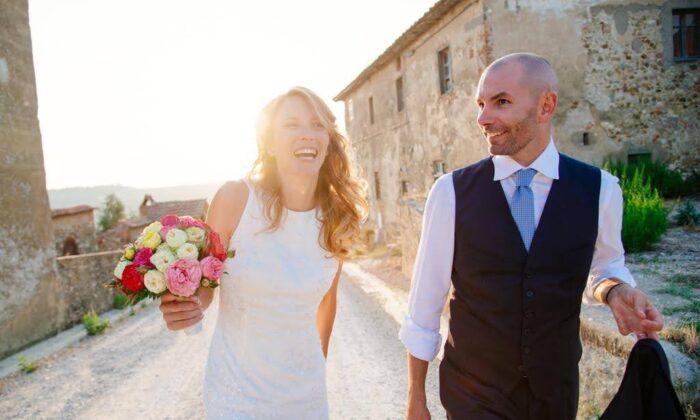 Candace Criscione traveled to Sicily in search of her relatives and family history. She now lives in Tuscany with ther Italian husband and their three sons. Above, Candace and her husband on their wedding day in Tuscany in 2013. (Courtesy of Candace Criscione)
Family & Home

Root and Branch: The Joys and Labors of Genealogy

Norman Rockwell’s 1959 painting “Family Tree” offers viewers an entertaining and instructive look at ancestry and pedigree. A pirate who weds a Spanish beauty, a Confederate and a Union soldier, a Native American woman, a mountain man and cowboy, a starchy New England clergyman—all these progenitors lead to a modern-day couple and their smiling son.

At the beginning of “Look Homeward, Angel,” Thomas Wolfe, like Rockwell, reminds us of our exhaustive heritage: “Each of us is all the sums he has not counted: subtract us into nakedness and night again, and you shall see begin in Crete four thousand years ago the love that ended yesterday in Texas.”

We humans are living links between the past and the future. The blood of our deceased grandparents runs in our veins even as we tenderly repair a granddaughter’s knee cut in a fall while running on the sidewalk. In the gray eyes and dimples of our grandson, we see the inherited gifts of his great-grandmother.

And while many of us either through indifference or neglect lack the interest to explore our own family tree, content with a few family stories gleaned from relatives, others enjoy the pursuit of their heritage, exploring their ancestors for fun and to learn more about their roots.

Unlike much of the rest of the world, where caste and ancestral lines determined status, Americans have shown comparatively little regard for titles and heredity. This was a country where men and women came to make of themselves what they could by dint of their hard work and intelligence. “Root, hog, or die” was the maxim of Westward bound settlers, meaning those pioneers needed to struggle and fight against circumstances if they were to survive. Bloodlines mattered less than grit.

But there were exceptions. In Massachusetts, those who claimed descent from the Pilgrims, and later from the Puritans, took pride in their lineage. To a lesser extent, the same held true for New York City. Families like the Cabots of Boston and the Roosevelts of New York knew where they hailed from and believed it bought them a special ranking in society as well as greater responsibilities.

Unlike New England, parts of the South were settled by aristocrats, often gentlemen who were seeking to escape the rule of primogeniture, which gave the family estate intact to the oldest son. Names like Lee, Byrd, Berkeley, and Page were signposts of this informal aristocracy, eventually leading to the organization “the First Families of Virginia.” Citizens of South Carolina, particularly Charleston, also claimed status based on rank and name. An amusing aside: Because of its humble beginnings, North Carolina was once called “a vale of humility between two mountains of conceit.”

Today is different. More and more people have taken up investigating their ancestors. Genealogical societies abound. Here in Virginia, for example, there are scores of historical and genealogical associations, the existence of which speaks to a deep desire on the part of many to explore the past.

And this desire to survey family history extends around the globe.

For example, Ali Anwaar, who is in his final year of law school in Rahimyar Khan, Pakistan, said his ancestors hailed from “a region where written records of births and deaths are only a recent phenomenon.” Despite the difficulties presented by this dearth of information, the intrepid Anwaar pressed on. Here is his account of that search:

“I started my research by outlining a list of all elders in my entire family, immediate and extended. I then proceeded to rely upon the computer program GRAMPS to record individual generations of my family before moving onto the rest. It was an extremely exhilarating process as no names would come out without a story, revealing interesting details about a lot of my ancestors that I had no idea about! Over a period of two months, I managed to collect adequate information about five generations of my family along with a large number of interesting personal stories that added a lot of value to my family’s genealogy.”

Regarding his motivation in tracking down his ancestors, Anwaar said, “This deep dive into my family history was more of a search for identity, almost like a frantic sailor searching for the coast where he set sail from, for no other beach would feel the same under his feet as the one that bore him.”

After her graduation from Arizona State University as a computer science major and some time spent studying Italian in Florence, Candace Criscione traveled to Sicily in search of relatives and her family’s story. Here she reports, “I met my family, and I’ll never forget the warm hugs they gave me or the fabulous meals or seeing one of my distant cousins for the first time as he walked over a hilltop with his flock of sheep.”

That genealogical foray changed Criscione’s life. She found work in Italy, met her husband, and now the two of them and their three sons live in Tuscany, where she specializes in planning family vacations in Italy.

Other readers also reported unforeseen endings to their research.

Marc McDermott is a genealogist who operates the website GenealogyExplained.com. When he started his own research, he discovered one of his ancestors had fought in the American Revolution. “That made it all worth it for me; there were so many hours spent poring over dusty records that turned into something really amazing,” he said.

Michelle O’Donnell is from Great Britain and currently resides in Toronto. She began looking into her absentee father’s history and discovered he was of Irish descent, making her eligible for an Irish passport. But there was another greater surprise: “I also—unexpectedly—discovered I had a sister six years older than me named Krystal. Not so much an ancestor, but I discovered her when digging around my ancestral history. I reached out to her, and we are now very good friends, which is great.”

And in examining his maternal relatives in Ohio and Indiana, Larry Williams uncovered all sorts of family history involving the Civil War and its aftermath, in which his ancestors played important political and cultural roles, serving in high office and corresponding with different officials, including Theodore Roosevelt.

If we wish to find out more about our family history, that task today is easier than ever. We have online sites that can help us track down those who came before us. We can follow in the footsteps of Criscione, fly to distant countries, and do on-the-ground direct research. We can take as our example Anwaar, who persevered and found that beach he was searching for.

And as all of these respondents know, we may be happily shocked by what we find. There may be villains in our family tree, like Norman Rockwell’s pirate, but we may also discover, as Larry Williams, that those who have gone before us were noble souls to be admired.

Poke around in that family tree, and be prepared to be surprised.