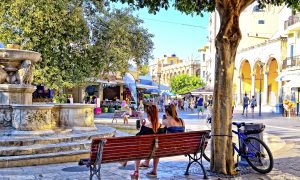 My Heraklion in a Day
0
Share Now
TelegramFacebookTweetEmailTellMeWeReddit
Copy Link 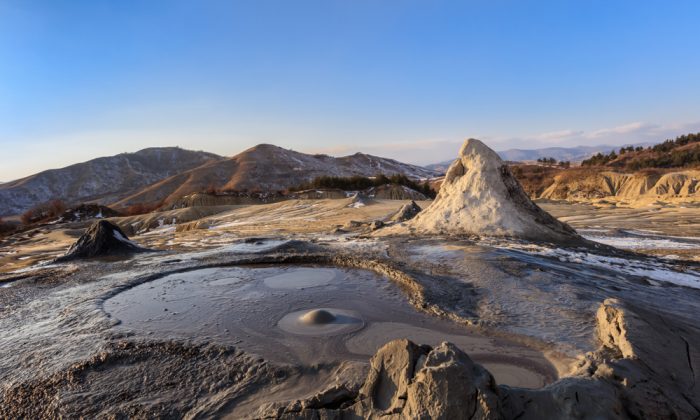 Not too long ago, I set out to show my baby boy and my husband a wondrous place I remembered from my childhood in Romania.

I was about 8 when I first experienced the mud volcanoes in Scortoasa, and I remember my father, back then a captain in the Romanian army, telling me, “Like the moon, this is where dreams are born.”

You see, my father is a poet. Inspired by his words, I stepped onto the moon at the Paclele Mari Mud Volcanoes. It was a moon with goats grazing freely, with barefoot children playing in the mud, with no guardians at the gates, no entrance fees I can recall, and no fences whatsoever. I’m 44 now. Things have changed. But my father is still the guide in this journey and the mud volcanoes still look like the stuff of childhood fantasies.

The voice of my father resonates, “This is where dreams are born.” Yet, the goats are gone—perhaps grazing elsewhere. This area of Buzau county remained agrarian, and goat herding is the main farming activity and source of income.

Unfortunately, now there’s a fence surrounding the mud volcanoes reservation—called Vulcanii Noroiosi in Romanian—and the children who dare to walk barefooted in the mud are scolded by the gatekeeper because the mud is apparently toxic—a danger to your health.

There are no obvious signs warning you not to allow children to run barefoot in the mud, yet the gatekeeper is very adamant about the health hazards, and he is ready to scold the unfortunate few who dare to take off their shoes while visiting the park instead of warning them kindly beforehand. But his lack of tact is the only nuisance about the place.

Don’t worry though: Although mud volcanoes may emit methane, carbon dioxide, and nitrogen among other substances—as long as the volcanoes just bubble without erupting violently, the quantities are not enough to endanger a kid goat, let alone a human being visiting the area for a short time.

As I walk around the reservation, the mud volcanoes spell lunar landscapes, and my little boy cannot help his oohs and ahs. There’s magic in the air, and the dry earth-crust cracks, alternating with rivers of cold muddy lava, are an intriguing perspective for the mind of a 10-year-old. He blitzes to the top of the highest of the modest volcanoes then descends even faster downhill. His laughter challenges some far away clouds, and I find myself forgetting my age. I am suddenly barefoot, earthing, feeling the heat of the scorched soil beneath me. Granted, it’s hard to explore the mud volcanoes wearing high heels—so I had an ulterior motive.

I run and laugh, yet in my chase for the forgotten childhood memories, I still have time to notice my father holding his wife’s hand, both beholding the mud slopes with innocent wonder. Then, my husband, a mountain of a man, raising his hands to the skies in an unsaid incantation in front of my son, who shakes off his feet some stubborn mud sediments.

I look around, although I normally prefer to ignore the tourists, and I notice an odd similarity to what I experience. Besides the ones focused on the few selfie moments and pose-for-Instagram instances, they are all spellbound. People seem frozen in awe staring at the landscapes: Couples walk hand in hand, men helping their better halves over the gullies, and the occasional amateur botanists gawking at the plants described somewhere at the entrance as rare, protected, and endemic seem so out of place.

They’re right to stop and wonder. The mud volcanoes are the only ones of their kind in Europe, and the flora features actors like Crambe tataria; Iris aphylla; Artemisia santonicum; a lot of Camphorosma annua; and especially Nitraria schoberi—which seems to take over the cracks. I’m sorry to leave you with the Latin names of these plants, but they don’t have garden varietal names. Somehow, yet, I find the lack of enough information on the flora and fauna of the place even more appealing and mysterious. “Dream,” I whisper, and I find myself dreaming until …

“I’m hungry, Mommy!” my son says in that little voice that always grounds me and reminds me not to lose myself.

As much as I don’t like the fences around the reservations and the impolite gatekeeper who will charge you about 4 RON—less than a dollar—per person to enter, I still love the lunar landscapes, and the restaurant here is just brilliant if you want to experience traditional, no-frills, Romanian countryside fare. They serve several dishes famous in the area, but their “ciorba de carne la borcan” (soup of meat from the jar) and sausages are spot on.

It’s the soup I’m after. I haven’t had it in more than 30 years, and I remember it so vividly. The fat, the smokiness of the meat, the natural flavors of the vegetable ingredients—a full, rounded dish with all the makings of the ideal comfort food was the promise on a big advertisement banner on an agritourism B&B fence just outside the reservation.

Oh, how times have changed! There was nothing standing here when I was 8. Perhaps a caretaker’s shack, but I don’t remember it. Now, it’s a full B&B—or agritourism, or pension, as they like to call it. And the owners are savvy enough to entice visitors in with that soup. The meat is smoked and preserved in a glass jar, then used to prepare this traditional, local dish. However, the soup itself is not served in a jar.

The sausages I mentioned are only produced in this part of Romania. They are called Plescoi sausages—and, naturally, they originated in the village of Plescoi, just outside Scortoasa, where the mud volcanoes draw so many nature lovers to see the unexpected. They’re prepared with lamb, beef, garlic, thyme, salt, and a generous amount of spicy and sweet red paprika, then smoked with European beech to get their special flavor. Under the heat of the summer sun, after the walk around the reservation, it’s great to stop at the restaurant for a portion of these spicy local treats and a pint of ice-cold beer.

Many people—hikers in particular—prefer to stay overnight at Pensiunea Vulcanii Noroiosi. Most visitors, however, arrive a couple of hours before lunch and leave after a copious traditional meal. The parking lot at the entrance of the reservation is often full at this time, but you’ll manage to find a spot on the side of the rustic country road leading here.

The mud volcanoes in eastern Romania were first discovered by French explorer Henri Cognard in 1867, and they were declared a Natural Monument by the Romanian government in 1924. The entire reservation has three areas—Paclele Mari, Paclele Mici, and Paclele de la Beciu. The most easily accessible and largest of them is Paclele Mari. Most tourists are happy visiting only this part of the reservation, as it features the highest and most spectacular volcanoes. Nature enthusiasts will venture further, to Paclele Mici, where there are many smaller volcanoes, and also ravines, streams, ridges, and badlands. Active volcanoes have circular pools filled with bromide-rich, muddy water, often with traces of crude oil and other oxidized petroleum products.

Since the terrain around the volcanoes is often difficult, visitors should wear proper shoes and mind the mud. The gatekeeper is actually right: the mud here is not the same used for mud wraps at a spa.

Visiting the reservation after the rain is not an inspired idea—the ground is uneven and slippery. The landscape is void of trees—there’s no shade, so hiking in the heat of the summer under the naked skies will also prove challenging. Take a bottle of water with you if you plan to spend more than an hour exploring the park.

Besides Vulcanii Noroiosi, Buzau county has many other attractions. Nearby, in Berca, you will find the Ratesti Monastery, an important Eastern Orthodox nunnery and religious landmark dating from 1634. The main church of the monastery has interiors by painters Nicolae Teodorescu and Gheorghe Tattarescu. In the complex, there’s also a small museum exhibiting a collection of Bibles, icons, gold and silver thread embroidery, and other sacred objects.

From the monastery, you can reach Sarata-Monteoru in about 35 minutes by car—a beautiful countryside drive that will lead you to a spa resort with healing waters and salt springs in a splendid natural setting. Spending the night here to relax in a saltwater pool after seeing the mud volcanoes is a perfect ending to a unique day in Romania.