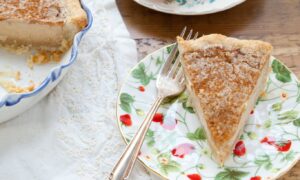 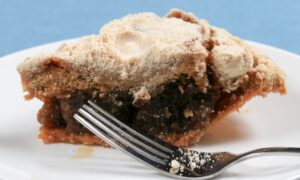 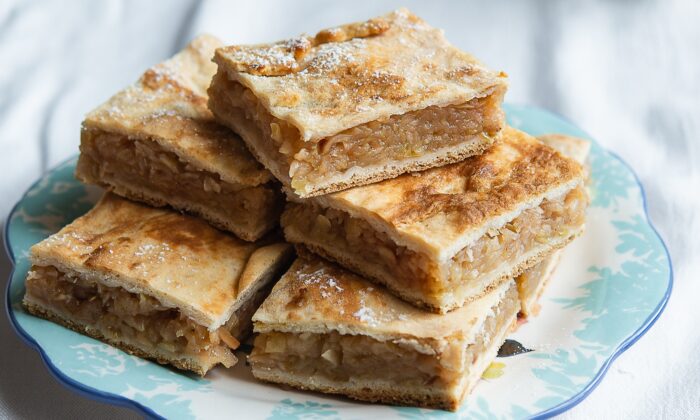 Placinte come with a variety of doughs and fillings, both savory and sweet, but perhaps most beloved of all is placinta cu mere: made with grated, spiced, and stewed apples, and a soft dough enriched with sour cream. (Irina Georgescu)
Food & Dining

For Romanians, nothing says childhood better than placinte. These layered pies were a constant presence in our lives—sweet or savory, hot or cold, always cut into rectangular slices, stacked on top of each other on a plate, and left on the table to entice hungry eyes and appetites.

The story of the placinta starts with the ancient Greeks and the Roman Empire. The pastry has a Greek origin, a Latin name, and a history entwined in trade routes and conquests.

Long before the Roman conquest of some parts of today’s Romania, the Greeks established trade settlements on the Black Sea, to connect the Middle East with Eastern Europe and the Balkans. It’s possible that through these trading routes, the method of baking flatbreads in the embers of the fire, and later in clay ovens, spread throughout the continent.

The Greeks were exceptional bakers; more than 80 varieties of breads and cakes were found to be offered by Greek bakeries in the third century B.C. Among them was a plain bread made with oat flour, cheese, and honey called “plakon,” from the Greek word for “flat,” “plakous.”

The Romans used to make two types of cakes for religious celebrations and banquets, one of which was placenta, a Latin translation of its Greek counterpart. The ingredients were exactly the same: flour, cheese, and honey.

A flatbread dough was rolled, repeatedly layered with a cheese and honey filling, then enveloped by one larger dough sheet that was sealed at the top. The creation was baked on bay leaves, which imparted a beautiful aroma, and also protected the pie from the direct heat of the oven. This traditional technique is still used today in Romania: we bake bread and pies on cabbage, grape, or horseradish leaves, and sometimes even linden leaves.

After the fall of the Roman empire, the Greeks in the Byzantine world improved the method of milling flour, and hence, its qualities. The higher level of gluten made possible the art of filo, or phyllo, pastry—phyllo meaning leaf. The name described not only the thinness of the pastry, but also that old method of baking on leaves. In Romania, we kept the ancient way of making plăcinte with bread dough, rather than just filo.

From here, the rest of the placinta’s journey through history was led by the Ottoman Empire, which stretched from Persia right up to the gates of Vienna. Hence, you can find versions of the layered pastry throughout Central and Eastern Europe, and the Balkans.

From Apples to Ground Beef

In Romania, a placinta is the most versatile way of encasing a filling, and thus translates into a vast number of sweet and savory creations.

There are two types of pastry dough used in various recipes: one that you can stretch and another that you can roll. We call them foi de placinta and aluat de placinta, respectively.

The first is a filo-style pastry, light and delicate, often brushed with butter, that is stretched to fit the size of your baking tray. Its main role is to sandwich together the filling, using two layers of pastry to one layer of filling.

The second type encompasses anything that can be rolled: a yeast- or baking soda-leavened dough, a shortcrust pastry dough, puff pastry, or simply a flatbread dough. These layers are sturdier and richer, complementing the flavors of the fillings. Dairy and especially fermented dairy, such as sour cream, are often used to give the dough a softer, velvety texture, which makes some of these recipes unique to Romania.

When it comes to shaping a placinta, the most common way is to create two layers of dough and spread the filling in the middle. The filling itself can vary widely by region, depending on different available ingredients and culinary traditions.

In Transylvania and Banat, situated in the north and west of Romania, where we have German influences, placinte filled with sauerkraut are still popular. In the south, where we were ruled for centuries by the Ottoman Empire, the fillings vary from meat to vegetables, apples, cherries, and pumpkin. In Moldova in the east, the land of dairy farms bordering Ukraine, placinte take the shape of breads stuffed with sweet curd cheese, that are served at village celebrations.

The most beloved placinta of all is the apple pie, placinta cu mere, for which the apples are grated and mixed with walnuts and cinnamon, then sometimes lightly stewed together before using, or simply left raw. Both ways are popular and make a refreshing, sweet, and tangy filling.

Another popular version is placinta cu branza, filled with sweetened cheese curds, almost like in the ancient recipe. It is sweetened with honey (or sugar, nowadays), studded with sultanas, and enriched with eggs, for a filling that is indulgent and moreish.

On the savory side, placinta cu carne is made with beef and pork mince, simmered with onions, tomatoes, and paprika—a satisfying meat pie that is delicious either warm or cold.

Placinte are our comfort food. Coming home to placinte on the table feels reassuring and special. We even call them placintele, or “little ones,” as a sign of endearment. This speaks of an emotional bond that we feel towards them.

It’s one of those dishes that you can’t make if you feel angry or distracted. It simply won’t bake. You need to think of the ones you bake it for with love and gratitude.

We make placinte for birthdays and religious celebrations, weddings and funerals, special guests, or simply a family member returning home after a difficult day or a long trip. Placinte are a sign of love and care, and they give people comfort and nourishment—not just for the body, but for the soul, too.

At my parents’ home, a 430-square-foot apartment rather snug for its five occupants, we were only allowed to eat in the kitchen. So when mum made a placinta, we would constantly float in and out to eat a piece, then inevitably come back for another one, until they were all gone. I was very fond of them. They made homework feel like a breeze, knowing that I had them as my reward.

Today, when I roll the dough and prepare the filling for my own placinta, I find the process to be a perfect time machine: I am suddenly there with my mum, chatting and laughing, cooking up a piece of comfort for the family.

Irina Georgescu is a food writer and author of “Carpathia: Food From the Heart of Romania.” Her work draws on her Romanian and Eastern European heritage, which she explores through food and history. She was born in Bucharest, Romania, and now lives in the UK.