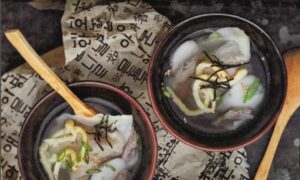 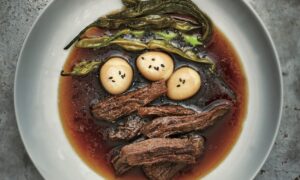 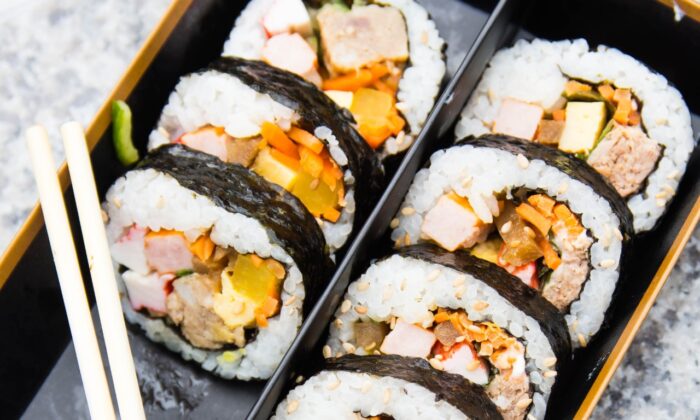 Kimbap can have all kinds of fillings, a kaleidoscope-like medley of different colors, textures, and flavors. (Von richardernestyap)
Food & Dining

Roll Your Own Kimbap, the Perfect On-the-Go Korean Snack

“It is the ‘sohn mat’ that makes every kimbap so unique and special,” my mom explained, carefully assembling stacks of julienned vegetables and arranging them neatly by color, ready to be rolled up in rice and seaweed.

Sohn mat, which literally translates to “taste of the hands,” is a Korean phrase that captures a cook’s unique way of cooking by feeling or instinct, adding that personal flourish and magical handmade touch. When you taste the food, you can feel the love of the person who made it—that’s sohn mat.

“And my sohn mat,” my mom added with a laugh, “is extra special.”

Indeed, that’s the secret ingredient to her kimbap, Korean rice rolls. A portmanteau of “kim,” dried roasted seaweed, and “bap,” cooked rice, kimbap is Korea’s official picnic and lunchbox (dosirak) dish—and my favorite packed school lunch growing up. Like a sandwich, it’s a portable food that requires no utensils to enjoy.

I’d watch as my mom took those rainbow-colored strips—orange carrot, green spinach, yellow pickled daikon and sliced omelet—and laid them down on a thin bed of rice, evenly spread over a sheet of black roasted seaweed. She would make sure that items of the same color were not next to each other, so that the cross section of the finished roll would properly showcase each individual ingredient—independent, but in harmony with its neighbor.

The pinwheel of colors inside kimbap aligns with Korea’s ancient philosophy, based on the theory of the Five Elements, that every meal should incorporate the five flavors, colors, and textures of food. Kimbap achieves this balance in every bite.

Using both hands, she would carefully and tightly roll up the fillings within the rice and seaweed. She’d press firmly across the cylinder, snuggling everything in nicely, and then brush the seaweed wrapper with a light coating of sesame oil followed by a sprinkle of sesame seeds. Using her sharpest and longest knife, she’d cut the rolls into individual round, bite-sized slices, each flashing kaleidoscope-like insides.

Before they all went into my dosirak, she’d pick up a piece and pop it into my mouth (my favorites were the end pieces, with extra fillings poking out). I loved the contrasting textures and flavors—the soft rice, the crunch of tangy-sweet daikon pickle—coming together into the perfect bite.

As the ultimate convenience food, kimbap is now sold everywhere in Korea. You’ll find packaged rolls in subway stations, street vendors, grocery stores, and even stand-alone restaurants specializing in the portable snack. Still, for many Koreans, including myself, memories of kimbap begin at home.

“I’ve eaten kimbap all my life,” said Robert Austin Cho, chef and owner of Kimchi Smoke in New Jersey. “My mother used to pack a lot of kimbap when we went on family trips. For me, trips meant it was kimbap time.”

Hooni Kim, chef and owner of Danji in New York City, has similar memories. “I associate kimbap with school trips, so there is a connection of kimbap to happy, special days out,” he said.

When chef Sohui Kim of Brooklyn’s Insa Restaurant went on class trips, “I had my mother’s kimbap to look forward to,” she fondly recalled. “I opened my dosirak and unveiled the most beautiful, colorful, tasty work of art. It did not disappoint. I even shared a few pieces with my friends, bragging about my mom’s sohn mat.”

There are four broad styles of kimbap, each of which includes numerous different variations in filling.

When it comes to what you roll up inside, the sky’s the limit.

There are also different regional types of kimbap. Chungmu kimbap, which hails from its namesake city, now called Tongyeong, is the simplest kind of roll, consisting of only rice and seaweed. The rolls are thin, and served alongside radish kimchi (seokbakji) and spicy squid (ojingeo muchim).

Mayak kimbap, meanwhile, was invented in Seoul at the Gwangjang market, and got its name from its addictive qualities—”mayak” means “narcotic.” This kimbap is a mini, uncut version of traditional kimbap, with only a few fillings such as spinach, carrots, and pickled daikon. It is served with a sauce made with hot Korean mustard and soy sauce for dipping.

Chef Hooni Kim mused that he sees the size of kimbap growing, with ever more ingredients being stuffed inside. “I sometimes struggle to fit one piece in my mouth nowadays,” he said, laughing.

But many still love kimbap’s simple, traditional fillings. Chef Sohui Kim, for instance, is a purist, and shuns versions with cheese and other Western ingredients; she loves hers filled with spicy dried squid. I also prefer classic versions, such as bulgogi or imitation crab meat.

But the sheer range of possibilities is part of what makes kimbap so popular: there’s something for everyone. A roll can be tailor-made to fit anyone’s discerning palate.

What is consistent, though, is that it is always made by hand—and most commonly by loving mothers packing their children’s lunches.

Kimbap looks a lot like its Japanese cousin norimaki, sushi rolls wrapped in nori (seaweed), and specifically futomaki, a thicker type of norimaki with multiple ingredients. Between the two countries, though, the exact origin of rice rolls is a source of contention.

Japan claims that Korea’s first versions of kimbap evolved from Japanese influences, and did not appear until after the annexation of Korea in the early 20th century. Koreans challenge this declaration, holding that kimbap’s beginnings were within their own borders, and proliferated from the production of kim (dried seaweed) in the Gyeongsang and Jeolla provinces from the 15th century. Official dish definitions aside, Korea undeniably has a long, ingrained tradition of rolling rice with banchan (various side dishes) in seaweed.

Whichever came first, there are some notable differences between Korean kimbap and Japanese norimaki.

Traditionally, all of the protein fillings for kimbap are cooked, while sushi often includes raw fish. Kimbap rice is seasoned with only sesame oil and salt, unlike sushi rice, which is seasoned with vinegar. Kimbap is also decidedly fatter—stuffed full of a myriad of colorful ingredients.

To serve, kimbap is usually accompanied by slices of danmuji (pickled yellow radish) or kimchi (fermented spicy cabbage), while norimaki is typically served with soy sauce, wasabi, and pickled ginger.