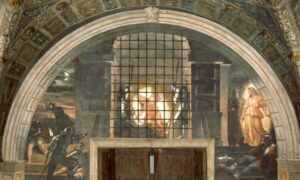 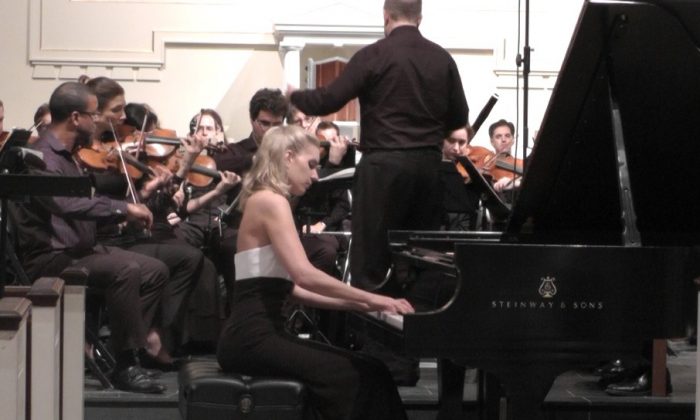 NEW YORK—Promising talents glittered in a pair of concerts presented by the New York Concerti Sinfonietta near the start of its fall season.

On Oct. 5, the Sinfonietta, under the direction of principal conductor Paul Hostetter, appeared at Teachers College under the auspices of the Columbia University Future China Initiative. The Oct. 7 performance took place at the Church of St. Joseph in Greenwich Village.

Dr. Julie Jordan, founder and artistic director of the New York Concerti Sinfonietta International Competition, is beginning her 28th year as a faculty member of The Juilliard School Evening Division.

Dr. Jordan prefaced both concerts with a piano solo, playing Chopin’s Nocturne No. 20 in C-sharp Minor, Op. Posth., at Columbia; and Rachmaninoff’s Prelude in G-sharp Minor, Op. 32, No. 12, two days later. Her playing was characterized by evenly executed and fluid runs of breathtaking velocity in the Chopin, sensitive phrasing, caressing rubato, and a ravishingly beautiful tone.

A Discovery
This summer at the 2013 Mountain View International Festival of Song in Calgary, Alberta, Dr. Jordan discovered Canadian soprano Michèle Cusson and invited her to make her debut with the New York Concerti Sinfonietta at the Asian Cultural Center in September, with a repeat appearance at Columbia University Oct. 5.

Calgary is bordered by the Canadian Rockies, leading Dr. Jordan to bill Cusson as a “Rocky Mountain Shining Star.”

At her New York performances, Cusson skillfully scaled-down her sizable vocal assets to sing the Countess’s aria, “Dove sono,” from Mozart’s “The Marriage of Figaro.” She fully inhabited the character, dramatically communicating her anguish at her husband’s infidelity during the introductory recitative, while serenely recalling the joys of her lost love in the expressively shaded lyrical aria that followed.

Cusson has studied at the St. Petersburg Conservatory and was a prizewinner in the Zara Dolukhanova International Art Song Competition in Russia. A recent finalist in the Liederkranz Wagner Competition, Ms. Cusson is spending this fall in New York studying Verdi and Wagner roles with coaches from the Metropolitan Opera. She currently is a pupil of the distinguished mezzo-soprano Mignon Dunn.

Cusson has the vocal resources and musical intelligence to achieve a major career. Hers is a voice of great potential, which is still developing. It will be gratifying to hear this gifted artist in heavier roles in the future.

An Eloquent Mozart Piano Quartet
In May 2011, Dr. Jordan had performed the Mozart Piano Quartet No. 1 in G Minor, K. 478, with the New York Concerti Sinfonietta in the New York premiere of a unique arrangement for string orchestra. On the present occasion, she returned to play the original chamber music version of the first movement. Her tonally lustrous and attentive collaborators were Orlando Wells, violin; Caitlin Lynch, viola; and Erich Schoen-Rene, cello.

It was an uncommonly well-blended ensemble, with pianist and strings in near-ideal balance. This was distinguished and eloquent Mozart playing, possessing the necessary authority and gravitas for this passionate and profound work.

It was a beautifully flowing account, displaying the pianist’s pellucid touch and pearlescent runs, with shapely phrasing and subtle nuance that was virtually flawless, save for a minor hiccup in continuity at a page turn.

Two Chinese Soloists
Next, the opening movement of Mozart’s Sinfonia Concertante for Violin and Viola, K. 364, was played by two Chinese soloists, Jiafeng Chen and Liyuan Liu. Chen holds a master’s degree from Juilliard and has been a top prizewinner of several major international violin competitions.

Both soloists were attuned to the dialogue between instruments, conveying the light and shade of dynamics, and the ebb and flow of phrasing, with a tasteful relaxation of tempo for the lyrical passages to allow them to be savored. It was a treat to hear such a fully realized performance of one of Mozart’s greatest works.

On Oct. 5, the soloists were backed by five strings (plus two oboes and two horns), whereas on Oct. 7 a full complement of 21 strings was employed. The Oct. 5 performance was revelatory, with orchestral playing of rare and exquisite refinement elicited by conductor Paul Hostetter. However, the larger orchestra’s accompaniment on Oct. 7 was a touch too loud and rumbustious for such reverberant surroundings.

The Challenging Rachmaninoff
Rachmaninoff’s Third Piano Concerto closed the Oct. 7 program. Composed in 1909, it has acquired the reputation of being something of a beast. One of the most technically challenging of all piano concertos, it was the centerpiece of the 1996 film “Shine,” based on the life of Australian pianist David Helfgott, who suffered a mental breakdown from the stress of playing it.

The distinguished American piano virtuoso Gary Graffman wished he had learned this concerto as a student, when he was “still too young to know fear.” Even its composer, Rachmaninoff himself, who was a formidable keyboard technician, later wrote an easier, alternative first movement cadenza because he found the original too taxing to perform.

However, on the strength of Jamina Gerl’s presentation of the Third Concerto at the Church of St. Joseph on Oct. 7, the work holds no terrors for her. The 27-year-old pianist, born in Bonn, Germany (Beethoven’s birthplace), is the recipient of the New York Concerti Sinfonietta’s First Prize Graduate Division—2013 International Rachmaninoff Piano Competition.

A nine-foot Steinway Concert Grand piano was specially procured for this occasion, but its voicing seemed untypically dull, especially in the treble register, forcing the pianist to work harder to project her sound. Despite this, her performance was a triumph for all concerned.

Gerl is a lioness of the keyboard. She has an enviably secure technique and fast fingers, while her warm tone avoided undue percussiveness. She had a firm concept of each movement’s overall structure. Not surprisingly, she elected to play the concerto’s original, more difficult cadenza, building it up inexorably to serve as the climax of the movement with startling, even frightening power.

The second movement had a rhapsodic, dreamlike quality, while the staccato, toccata-like perpetual motion passages of its central portion were deftly and dazzlingly dispatched. Contributing to the performance’s success was the conducting of Paul Hostetter, who conjured glowingly lush sonorities from the excellent, 40-member professional orchestra.

Gerl’s playing is already highly impressive, but it could be enhanced even further by greater variety of tonal color, more differentiation between primary melodies and accompanimental figuration, highlighting of inner voices, and a willingness to play more softly when appropriate (for example, at the start of the first movement’s recapitulation).

The performance ended strongly. Gerl’s brisk tempos gave the last movement a run for its money, elevating the adrenaline level. The ferocious motoric power of her stretto near the close of the finale raised goose bumps, opening out into a majestically broad, lyrical, and exultant presentation of the culminating melodic theme, capped by a brilliant fusillade of octaves hammering home the emphatic conclusion of an exciting interpretation.

Future concerts of the New York Concerti Sinfonietta’s International Concerto Competition winners and Shining Stars Debut soloists will be held Nov. 24 at Carnegie Hall’s Weill Recital Hall, March 2, at a location to be announced, and March 3 at the Church of St. Joseph, as well as other dates and locations in spring 2014. The Nov. 24 Carnegie Hall concert will feature solo and chamber musicians. For information, or to apply for forthcoming competitions and debuts, contact dr.juliejordan1@gmail.com or www.newyorkconcertisinfonietta.com and www.juliejordanpresents.com.