Rock Star Says, Shen Yun is ‘Inspirational and the World Needs Inspiration All the Time!’ 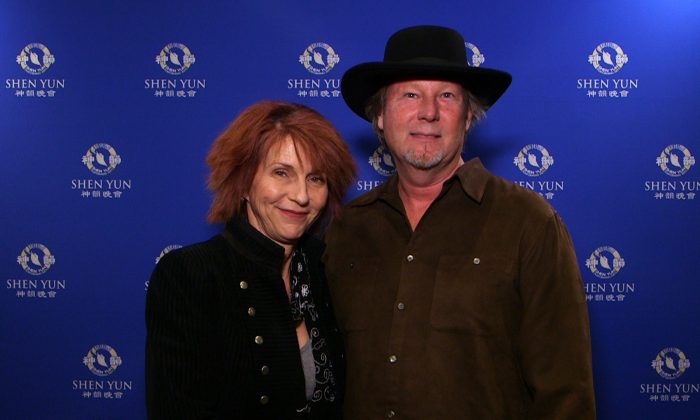 Buster Akrey, Rock Star in company of his wife after seeing Shen Yun Performing Arts at The Fred Kavli Theatre in Thousand Oaks on the eve of March 22, 2016.

THOUSAND OAKS, Calif.—Shen Yun brings good things to their audiences, including “inspiration for the world” to be a better place according to Buster Akrey, a member of the Rock and Roll Hall of Fame band Steely Dan.

“It is inspirational and the world needs inspiring all the time, especially with the children,” said Mr. Akrey, at the Fred Kavli Theatre on March 22nd. “I would love the children to see this, because, wow, to see what they can become, wonderful!”

“I love the overall theme of creation, and the idea that we’re here to better ourselves and then return to a better place, and I believe that,” he said.

“You know, that is a universal theme throughout the world and it’s a growing theme, and it’s a hopeful theme,” he continued.

He thought it was great to watch that theme be interpreted with song and dance.

There wasn’t any aspect of Shen Yun’s performance that didn’t earn accolades from Mr. Akrey.

“It’s like I have never seen before; it’s so perfect,” he added, “Even the hand motions were so precise and some of the dancing, the [leaps], the power, ….. whether it be the back flips, but I love just the [way they] turn and when they lift [up], it’s so high; they get such height.”

“Classical Chinese dance has a long history of thousands of years, passed down continuously within the imperial palace and ancient Chinese theater and opera. Soaking up profound wisdom from every era and dynasty, it has become a complete system of dance embodying traditional aesthetic principles with its unique dance movements, rhythms, and inner meaning,” states Shen Yun’s website, a treasure trove of information for their audiences.

I would say this is one of the best cultural experiences I’ve had.
— Buster Akrey

The unity of the dancers was something that amazed and impressed Mr. Akrey.

“Sometimes, it is like they’re one mind, of one mind,” he said of Shen Yun.

The music of the Shen Yun orchestra and the singers impressed Mr. Akrey.

The company website says, Shen Yun’s orchestra “blends the spirit of Chinese music with the power of a Western orchestra. All-original compositions draw upon five millennia of culture and legends. Western strings, percussion, woodwinds, and brass accentuate the sound of ancient Chinese instruments—like the two-stringed erhu and the plucked pipa. Never before have the exquisite beauty of Chinese melodies and the grandeur of a Western symphony been so seamlessly combined.”

“I am a musician, so I love the musicians and the orchestra is phenomenal. That’s a world class orchestra.”

Mr. Akrey loved the way the digital backdrop added the effect of being in a different realm and of connecting the heavens with the earth.

He felt the whole production was beautiful. “You know, I’ve seen a lot of shows, been in a lot of shows, and this is as good as it gets. This is the highest level, and it’s good to see it.”

“So I am so glad to be here,” he said. “I am so glad, that, you know, the Chinese people have a culture that has this much depth to bring, and I am so glad that we get to see it.”

His wife, artist and sculptor, Lynn Farrand added her thoughts: “I think it’s beautifully done. … The colors were amazing, they were so complementary and contrasting in such a vivid and exciting way. The fabric and choreography was so integral to the aesthetics of the scenery, it made the scenery. The fabric was just so fantastic, I loved it, it was beautiful.”