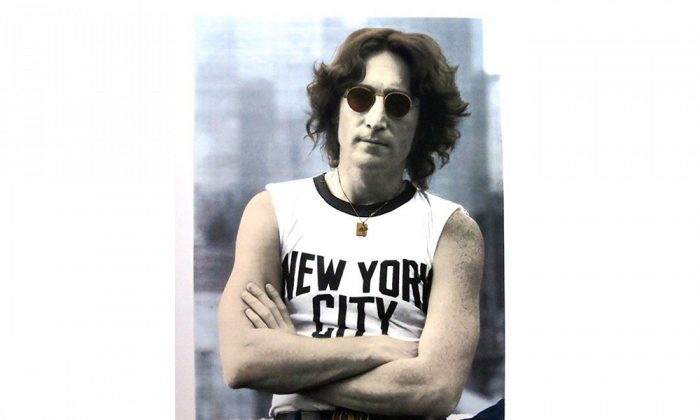 John Lennon of Beatles fame is pictured in this silk-screen portrait made by rock photographer Bob Gruen. Gruen returns to Canada for an exclusive photography exhibition and art sale at Toronto's Liss Gallery from June 23 until July 11, 2015. (The Canadian Press\HO\Bob Gruen)
Art Marketplace

TORONTO—Whether hanging out on a roof with John Lennon, on a runway with Led Zeppelin, or on a subway car with the Ramones, rock photographer Bob Gruen has always had a knack for capturing the moment.

He once played bugle for the Clash, he served as personal photographer to Lennon and Yoko Ono, and his 69th birthday party last year attracted the likes of Alice Cooper, Billie Joe Armstrong, and Debbie Harry.

Toronto’s Liss Gallery is hosting an exhibition and sale of the New Yorker’s most-famous work beginning June 23 and running to July 11.

Ahead of his trip to Toronto for the exhibition, Gruen shared the stories behind some of his most famous photographs.

Gruen took many photos of Lennon during his post-Beatles American phase, but none more famous than his shots of Lennon peering into the camera behind circular shades, lanky arms exposed under a sleeveless shirt reading “New York City.”

The shirt was a garment unique to the sidewalks of Times Square that Gruen used to buy in bunches. He cut the sleeves off one to lend it a “New York look” and gifted it to Lennon.

Gruen was later onboard the same plane when he snapped a friendly meeting between Elton John and R&B great Stevie Wonder.

A year later, Gruen was shooting Lennon on the roof of his apartment and, noticing the distinctive skyline, Gruen suggested Lennon wear the shirt if he still had it. (To Gruen’s delight, he did).

“We were friends and he felt very comfortable with me, and he looks comfortable in the picture,” Gruen said. “He’s got sunglasses on but he’s accessible and open and you could go up and talk to him. I think people relate to that.”

Gruen famously snapped the British hard rock institution coolly draping their arms over the wings of a jet bearing their name.

“They’ve got their shirts open, they look so casual and they own their own airplane,” Gruen said of the photo. “Every kid looks at that like: ‘I want to be a rock star.'”

At the time, Gruen was flying with the band in the “very comfortable” plane, which he says had two bedrooms and a long brass bar. But he says it was actually rented.

In fact, Gruen was later onboard the same plane when he snapped a friendly meeting between Elton John and R&B great Stevie Wonder.

Gruen got his major break when he fell in with Ike and Tina Turner. He saw Tina perform and was so impressed, he watched her again just days later in a small club in Long Island.

At the end of the show, Tina danced offstage as a strobe light flashed and Gruen snapped his final four frames using a one-second exposure.

“Three of them are useless and one is one of my best pictures ever,” he said. “You see five distinct images of Tina. It’s so exciting, so intense, and it really captures her.”

Within a year, he was the tour photographer for the Turners.