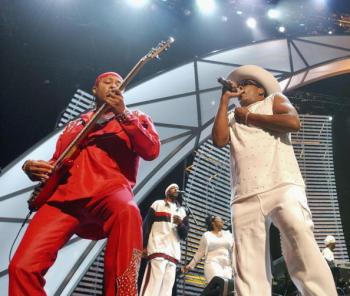 BY Alex Johnston TIMEAugust 16, 2010 PRINT
Robert Wilson, the bassist for the Gap Band, died on Sunday due to a heart attack. He was 53.

The Gap Band was probably best known for their electro-funk classic “You Dropped a Bomb on Me” in 1982.

Wilson died of a massive heart attack at his home in Palmdale, California, the Associated Press reported.

Charlie, Ronnie and Robert Wilson, three brothers, formed the band in the late 1960s in Tulsa, Oklahoma, but achieved fame in the late 1970s and early 1980s with several hits including "Outstanding," "Oops Upside Your Head," "Yearning for Your Love."

They shorted their name to the Gap Band from their original incarnation, which was the Greenwood, Archer and Pine Street Band.

"My brother Robert was a bad boy on the bass," Robert Wilson's brother Charlie said in a statement on Monday, according to AP. "We shared a bond as brothers, musicians and friends. I loved him, and losing him is difficult for both Ronnie and I. The music world has lost a very talented man."