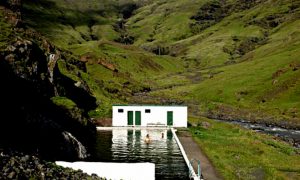 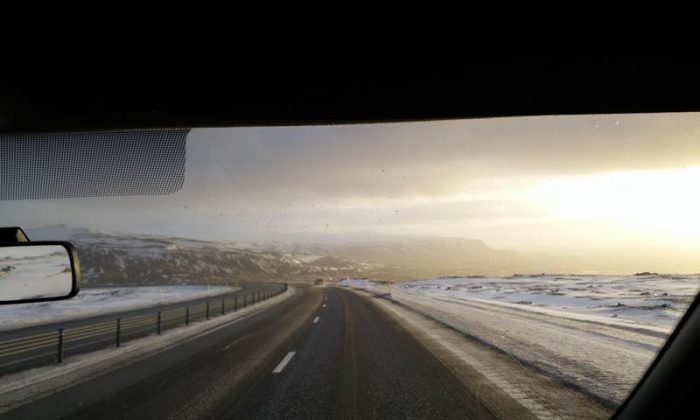 Iceland is one of the most beautiful places I have ever visited, and one of the best ways to see it is with a group of fellow travellers out on a road trip. This will not only save you a load of money in comparison too doing a tour, but is also way more fun.

Staying at Kex hostel in Reykjavik it’s easy to meet other people all up for doing the same thing.

The first road trip out was with 3 Aussies to go and see the classic golden circle route. As soon as you leave Reykjavik the fields become white with snow and ice, and a huge lake looms in the distance, shrouded in dark clouds.

You don’t need a heavy duty car for this either, a simple car will do the job as long as you don’t go off road.  Driving in the middle of winter certainly added some adventure to the journey, with one of the Aussies at the wheel swearing of a possible imminent crash just adding to the humour of the situation.

Moving further along you reach a geothermal area with geysers, where one can see them burst into the air. It’s bloody freezing outside and you wish that the hot geyser water was just that little bit cooler for a warm dip.

Reaching the end of the line after some more cruising you can see the half frozen waterfall called (ok I forgot the name, whatever)! It is a pretty impressive setting, and very slippery as well. They don’t call it Iceland for nothing…

There is only a few hours of daylight in winter, starting around 10.30 and finishing 4.30ish. As such we headed back as the prospect of driving on the road in the dark with possible snowfall was not tempting. But the driver pulled it off and we didn’t crash!

The next day was with a bigger crew of people from the hostel, renting out a 9 seater van with a trusted Canadian at the wheel used to the driving conditions. This time it was down the south coast towards a volcanic area of mountains, passing black sand beaches and waterfalls on the way. The views were stunning, but being Iceland everywhere is like that.

The main mission for this trip was to reach a hot spring up in the mountains that not many people visit. Driving as far as possible it was time to get out and hike the rest of the way, crossing freezing streams, and dreaming of the warm waters that lay ahead.

The dream of warmth evaporated fast (yes puns everywhere) as the hot spring turned out to be more a luke warm spring, or as the Canadian put it: a bloody cold spring!

Iceland Off the Beaten Track

However the setting was amazing and so the plunge was taken into the water. Everyone congregated with the others around the small pockets of warmth near the pipe and walls where there was some hot water falling.

Before long the weather turned nasty and hail and sleet started falling, meaning time to get out and have a cold soaked walk back to the van. But it was all worth it for the fun and scenery.

Never has heating in a van been so happily received!

Getting warmed up in the van heading to the nearest town for some hot chocolate and something to eat, and with the daylight fading fast, it was time to drive on back to Reykjavik.

Back in Reykjavik a few hours later it was time to buy the driver some beer and chill out at the end of an awesome trip.

Road trips in Iceland are highly recommended. Go stay in a hostel, meet other travellers (it’s easy) and go cruising around one of the most amazing countries in the world.

Copyright © 2014 by Backpacking Man. This article was written by Jonny Duncan and originally published at backpackingman.com.