2020 Holiday Travel: When to Book and How to Save
0
Share Now
FacebookTweetParlerEmail
Copy Link 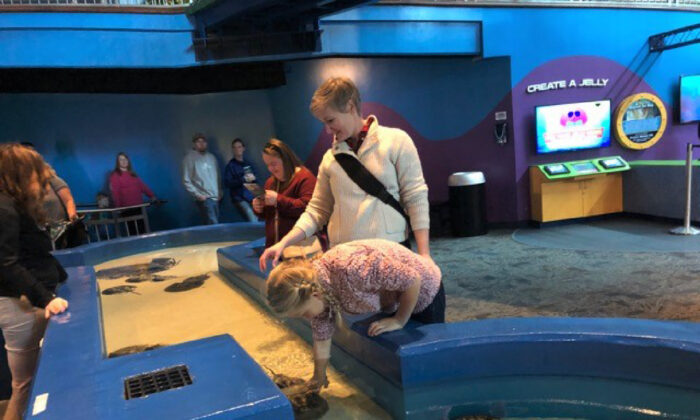 The Discovery Center at Ripley's Aquarium of the Smokies in Gatlinburg, Tenn., offers guests the opportunity to touch horseshoe crabs. (Courtesy of Bill Neely)
Destinations

Our favorite of all the aquariums we have ever visited is Ripley’s Aquarium of the Smokies in Gatlinburg, Tennessee.

Here, visitors of all ages can enjoy a full day of wonder and learning. Even the walkway to the entrance is flanked by great one-sentence facts about marine animals so that they can easily be read by people eager to get inside.

As soon as we entered, a colorful tank of beautiful fish greeted us. Then, we came to the large indoor playground with so many climbing and crawl-through possibilities for fun exercises, all beneath enormous skeletons of extinct prehistoric giant water animals above us.

We entered at the upper level, where we enjoyed many tanks of unusual and wonderful creatures. Among them were schooling fish, moray eels, flounder, and many more. We were eager to see the feedings listed on our schedule, however, so we headed down to the lower level.

We entered the tunnel through the Shark Lagoon just in time to see the diver feed the ferocious-looking fish. The tank holds several varieties and we thought the diver was very brave, but these large marine animals knew he had the food they wanted. The tank also contains some mammals and sawfish, also called carpenter sharks. Fish of all kinds as well as some turtles swam over and around us as we passed through.

We emerged to view the large coral reef and stop at the Discovery Center, where adults and children can touch some of the harmless sea specimens, such as horseshoe crabs. Signs to wash hands and pumps filled with antibacterial hand sanitizer awaited when we were finished.

Our next stop was everyone’s favorite, Penguin Playhouse, where we were just in time to watch these tuxedoed creatures feed. Penguins swim underwater like fish, but they are mammals, so must come up for air. And they walk like ducks on webbed feet.

When two attendants arrived with buckets of fish, the patient penguins emerged from the water, lined themselves up in an orderly fashion, and marched single-file to be fed. That was so much fun to watch, but the most fun of all was the kids’ tunnel that allowed children to pop up within the enclosure for up-close encounters.

Another fascinating feeding was at Stingray Bay. Some of these creatures swam around while others lay still on the floor of the tank and appeared to be sleeping. This gave us the opportunity to have a look at their topsides. Then, we had a different experience as a fish clung to the glass tank wall facing us so that we were able to see its underside. The fish took the food the diver doled out into their mouths, chewed, and swallowed while batting their eyelids at us.

We spent half a day at the aquarium before rushing off to other activities, but next time, we may schedule an overnight adventure. School groups can also take advantage of a marine science class, and in the summer, mermaids swim at the Coral Reef. Signs along the way explain what you are seeing and tell you about what you might have missed that will have to wait until next time.

Ripley’s Aquarium of the Smokies: RipleyAquariums.com/gatlinburg