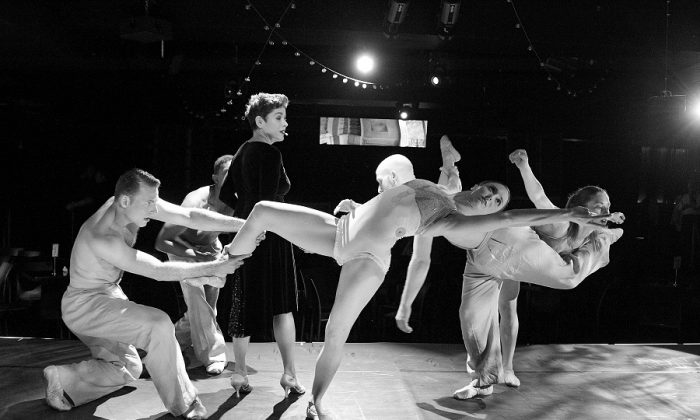 When you think of French popular music, the first name that comes to mind is Edith Piaf (1915-1963). “The Little Sparrow,” as she was called, is celebrated in RIOULT Dance NY’s world premiere of “STREET SINGER–Celebrating the Life of Edith Piaf.”

Choreographer Pascal Rioult has created and appears in a unique dance/theater piece. Broadway veteran Christine Andreas appears as Piaf, singing her songs (mostly in the original French, but sometimes adding the English versions) and portraying her with a French accent.

Wearing a copy of Piaf’s trademark black dress, she is magnificent. The performance would be worth attending just to enjoy her singing. However, there is much more.

Rioult wanted to present the work in a cabaret theater similar to the ones that Piaf appeared in early in her career. At 42 West, there is an elevated stage, where the excellent four-piece band under the musical direction of Don Rebic plays, with the accordion adding a French flavor.

There is also a runway with the audience sitting at small tables on both sides. Much of the singing and action takes place here and unless you are sitting in the front row, the sight lines are obstructed.

The choreographer and head of the company, Rioult, had been a principal dancer with Martha Graham’s company and he does a bit of dancing here. More often, he narrates the story of Piaf’s life and occasionally steps in as one of the significant figures.

In the first act, he is wearing a black suit and resembles Ed Asner as Lou Grant. In the second half, at the beginning, he takes off his jacket to portray the boxer, Marcel Cerdan, considered the great love of Piaf’s life. (The script doesn’t mention the fact that Cedran was married at the time of their affair.)

The video projections of the climax of Cedran’s fight with Tony Zale are more exciting than anything in the recent overhyped Floyd Mayweather-Manny Pacquiao bout.

The narration goes through the main points of Piaf’s life, starting with her rough childhood. Abandoned by her parents, she was raised in her grandmother’s bordello. She suffered from blindness for about three years. The condition was supposedly cured by the prayers of the prostitutes. At 17, she gave birth to her only child but the girl died at two years of age.

Piaf first sang on the streets of Paris and then in a nightclub in Montmartre, where she became a star.

While Andreas is singing, the 10-dancer troupe recreates the lively dances of the period, including a can-can (a holdover from the Folies Bergère earlier days), a swing number, and a dance described as “cheek to cheek” (but looks more like “hand on cheek”) to the song “Mon Manège À Moi.”

A high-kicking female impersonator mimes the words of Cole Porter’s “My Heart Belongs to Daddy,” with Andreas singing. There is a dance about domestic bliss, which is amusing but has nothing to do with Piaf.

Piaf had some difficulty at first conquering America. She was hurt by a critic’s comment that she was “chunky.” However, she eventually became popular here.

She fell madly in love with Cerdan, but he died in September 1949 in a plane crash when he was flying to New York to see her. She wrote the lyrics one of her biggest hits, “Hymne à l’amour,” to music by Marguerite Monnot, as an expression of her love for the boxer.

Piaf survived several car crashes and suffered from various ailments. At one point, Andreas (as Piaf) reels off the list of drugs she is taking. The singer died of cancer at age 47.

The last number is “Non Je ne Regrette Rien” (“No, I regret nothing”), which seems an apt expression of Piaf’s remarkable resilience.

The dances usually have some relation to the songs. On the other hand, “La Vie en Rose” presents a turbulent relationship, almost an Apache dance, which is more dramatic than the lyrics suggest.

The 10 dancers in the RIOULT company are graceful and expressive, able to convey whatever the imaginative choreographer has in mind, from saucy to romantic.

The four performance run of “Street Singer” is over but keep an eye out in case it returns. As for the wonderful Christine Andreas, she will be performing on the Crystal Serenity, sailing from Cartagena to New York City on June 5-12.