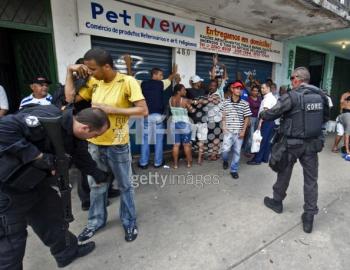 Jasper Fakkert
Editor-in-Chief, U.S. Editions
Jasper Fakkert is the Editor-in-chief of the U.S. editions of The Epoch Times. He holds a Bachelor's degree in Communication Science and a Master's degree in Journalism. Twitter: @JasperFakkert
View profile
Follow
biggersmaller
Print
After days of clashes between police and gang members in Rio de Janeiro, the death toll reached 30 on Thursday.

Thirty marines and armored vehicles in combination with 150 special police force personnel were deployed in the city on Thursday.

Brazilian newspaper Journal do Brasil described images broadcast on television showing hundreds of armed gang members in a slum area in the suburb of Penha.

"The goal of the operation is to arrest people who are promoting the attacks by the city," said Alvaro Garcia, chief of the military police, according to the newspaper.

Authorities say the gangs are retaliating against the pacification program, which drove criminal activity out of slum neighborhoods.

Members of drug gangs have been burning cars to prevent police operations.