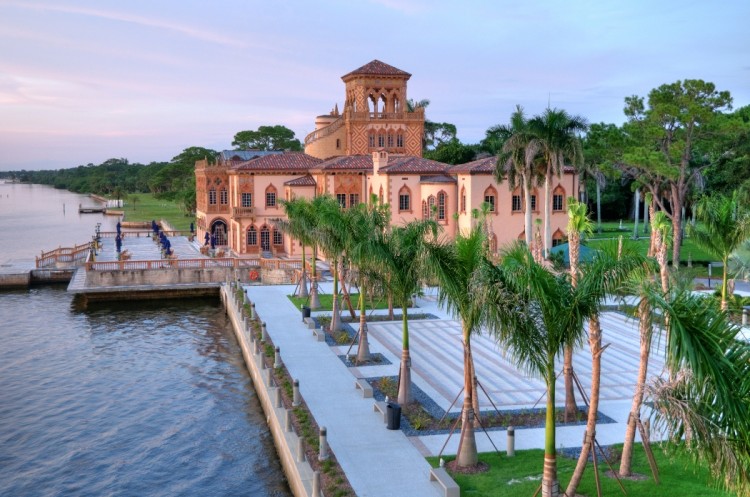 “Rest on the Flight into Egypt,” circa 1570, by Paolo Veronese, oil on canvas, bequest of John Ringling to his museum in 1936. (Courtesy of The John and Mable Ringling Museum of Art)
Arts & Culture

SARASOTA, Fla.—Picture walking down a path that takes you past beautiful banyan trees toward a Venetian Gothic-style building. Palm fronds, mossy oaks, and the feather grass blow in the warm breeze coming off Sarasota Bay, and you have a whole day to explore.

The couple were great admirers of Venetian architecture and inspired by extensive travel in Europe, they dreamed up their winter home away from their New York apartment on Park Avenue. “Mable had an oilskin portfolio filled with postcards, sketches, photos and other materials that she gathered on her travels to aid the architect with his design,” notes the Ringling website.

The Ringlings bought 20 acres of land on the waterfront and started construction of their mansion, Ca’ d’Zan (literally the “House of John” in the Venetian dialect), at the beginning of 1924. It cost $1.5 million, according to the website, and was completed just before Christmas in 1925. At the height of John’s career, the couple started collecting fine European art, old masterworks, and sculptures.

Reflecting “the last of the Gilded Age mansions to be built in America,” the mansion evokes a Venetian palace, like the grand Doge’s Palace or Gothic Cà d’Oro, with Sarasota Bay serving as its canal, according to the website.

Within this palace of treasures are paintings and sculptures by the great old masters, including Rubens, Titian, van Dyck, Tintoretto, Velázquez, Veronese, El Greco, and Gainsborough.

Ringling pushed through a number of devastating tribulations to complete the art museum. After construction began in 1927, the stock market crashed, and his wife Mable died young, in 1929. Instead of giving up his dream, he borrowed money to finish it, knowing it would immortalize his beloved’s memory. The museum opened to the public in 1931.

But it was never smooth sailing for the museum. Ringling bequeathed his art collection and property to the people of Florida when he died in 1936 at age 70. Unfortunately, the state had to battle with creditors over the estate, and it wasn’t until 1946 when it was finally in the hands of Florida. But it wasn’t managed well, and the lack of funds made the problems overwhelming.

By the late 1990s, the museum was a dilapidated shadow of its former glory.

“Governance was transferred from … Florida’s Department of State to Florida State University, establishing the Ringling estate as one of the largest museum-university complexes in the nation. As part of the University, the Museum has experienced a rebirth,” according to the website.

In 2007, endowed with tens of millions in government funds, donations, and pledges, the entire estate was restored and expanded.

“The Triumph of the Eucharist” is a collection of 11 large tapestries commissioned by Archduchess Isabella Clara Eugenia, daughter of Phillip II of Spain, in 1625. The four in the Ringling museum are the only ones in America.

At the Symposium on Rubens’s “Triumph of the Eucharist” series, Arthur K. Wheelock Jr., of the National Gallery of Art in Washington, pointed out that at the time when John Ringling purchased the tapestries in 1926, Americans weren’t especially partial to Rubens because of his allegiance to the Roman Catholic Church and because the women he painted were plump.

“A stereotyped, but much exaggerated reproach against Rubens is, that in historical and sacred subjects, he takes for models of female figures his heavy muscular countrywomen,” wrote the American George Henry Calvert in his book about Rubens titled “The Life of Rubens.”

Ringling, however, was fond of European art and in present times, the paintings are viewed as treasures.

Reflecting his finesse and passion for the art, Ringling picked certain features in paintings and decorated some of the rooms of the museum to match, giving context for the historic details and intricate brushwork. For instance, he placed replicas of the columns in one of Rubens’s paintings in the room, creating another dimension to the entire experience.

Worth noting is that Flemish-born Rubens traveled to Venice to study the works of the Venetian Renaissance painter Paolo Veronese, who is the focus of a major exhibition currently showing at the museum.

The exhibit Paolo Veronese: A Master and His Workshop in Renaissance Venice, opened on Dec. 7 and is on view through April 14. The artist holds special significance for the museum, as one of the highlight works, Veronese’s “Rest on the Flight into Egypt,” was John Ringling’s first-ever purchase of an old master painting.

Marco Boschini, an Italian art historian, said regarding Veronese in his book “The Map of Painting’s Journey”: “Certainly never has been seen among painters such regal pomp and circumstance, such majestic actions, such weighty and decorous manner! He is the treasurer of the art and of the colors. This is not painting, it is magic that casts a spell on people who see it.”

Veronese was very successful and needed a workshop of staff, pupils, and assistants, who painted the backgrounds of major works, to keep up with demand.

Ringling was also interested in Asian art, and another exhibit, open until July, showcases Chinese ceramics. The Mythical Creatures exhibit delves into the animal symbolism that is so important in ancient Chinese culture and includes dragons, lions, phoenixes, monkeys, and elephants.

Other noteworthy paintings include the “Blue Madonna,” by Carlo Dolci, and Diego Velasquez’s “Philip IV,” among many others.

Don’t forget to step out into the courtyard where a life-size bronze replica of Florence’s famous David statue by Michelangelo stands, as well as two fountains—”Fountain of Tortoises,” one of three replicas from the Piazza Mattei in Rome, and the “Oceanus Fountain,” copied from the 16th-century original by Giovanni Bologna in Florence’s Boboli Gardens.

The courtyard is the perfect complement to the museum and the whole Venetian atmosphere of the Ringling estate. Enjoy a breath of fresh air, a rest, or take some time to reflect on the Ringling museum experience while overlooking the bay.