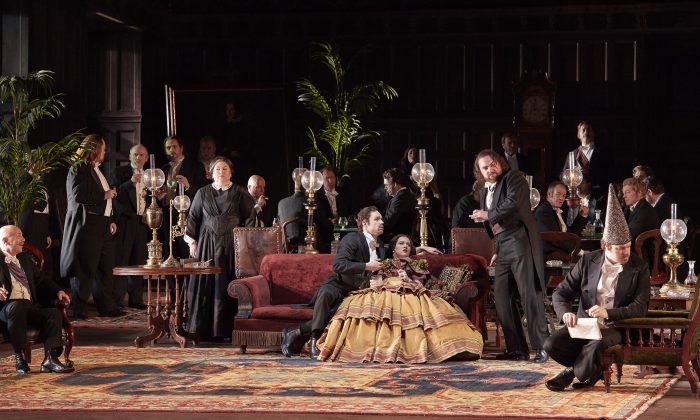 “Rigoletto” is one of the greatest works of the operatic repertoire with beautiful melodies and a complex plot that tackles fundamental issues about human nature and societal relations, underscoring the dangers of lacking a strong moral code to guide one’s actions.

Composed by Giuseppe Verdi with a libretto by Francesco Maria Piave, the opera had a successful premiere in 1851 at Teatro La Fenice in Venice, Italy, and has subsequently become one of the world’s most performed operas.

“Rigoletto” was adapted from the play “Le roi s’amuse” (“The King Amuses Himself”) by French author Victor Hugo. It takes place at the court of the Duke of Mantua, a man whose main pursuit is the conquest of beautiful women. The job of the hunchbacked court jester Rigoletto is to amuse the Duke, and that includes poking fun at the courtiers, often spitefully.

When a proud father comes to confront the Duke for seducing his daughter, Rigoletto greets him with mockery and ridicule. Outraged, the old man places a curse on both the jester and his master. The latter becomes deeply troubled by the curse.

Unbeknownst to anyone, for the past three months Rigoletto has been keeping his young daughter, Gilda, who has just come out of the convent where she grew up, hidden in his house in order to protect her from the decadent court. Yet through a twist of fate and a group of hateful courtiers, Gilda falls into the Duke’s hands. Overcome by grief, Rigoletto develops an insatiable wish for revenge, leading to disastrous consequences for him and his daughter.

“It’s one of the first operas where the line between good and evil is really blurred,” says British baritone Roland Wood who is singing the role of Rigoletto in the Canadian Opera Company (COC)’s revival of the opera this season.

“Who is the villain of the piece? …. Almost everyone in the piece could be accused of being the villain. Everyone is complicit. This production enhances that and [gives the] feeling that it’s not just about three people and their relationships.”

Directed by American Christopher Alden with stage designs by Canadian Michael Levine, the COC’s staging is a co-production with the English National Opera, last presented in Toronto in 2011. The plot is transposed to a 19th-century Victorian club where men rule and women are subservient. However, the theme of exploitation in the opera is far more complex than the relations between sexes, exposing deeper moral weaknesses in both family and societal relationships.

Wood says the cast has been discussing how timely the staging of this opera is today in light of the allegations of sexual misconduct in Hollywood and other high-profile industries.

“If you draw that parallel, then Rigoletto is in a similar position to a lot of people surrounding those who are being accused of sexual harassment.  He’s allowing the people who are guilty a free pass by deflecting the blame elsewhere,” says Wood, adding that the Duke’s courtiers play a similar role.

“They’re all complicit in order to preserve their own station in life, so it’s very easy to draw parallels between that world and the world we’re experiencing at the moment.”

The original libretto for the opera is set in the 16th century, a time when hunchbacks were considered devilish, cursed, or ludicrous, says Wood. Despite this, Rigoletto is able to use his disability to his advantage to gain a key role at the Duke’s court.

“His position as jester, or as fool, allows him the opportunity to be in a position of power and to say and do things that people in his situation ordinarily wouldn’t be able to do [such as mocking the courtiers].  I think he enjoys that, while simultaneously hating himself for doing it,” he says.

Reluctant to leave the Duke’s world, Rigoletto nonetheless wants to protect Gilda from its corruption, so he bars her from leaving the house, except to go to Church.  His efforts, however, turn out to have the opposite effect.

“She’s arrived [from the convent where she grew up] with a completely artificial view of the world and in trying to protect her from the dangers of the world, Rigoletto actually leaves her open to abuse,” says Wood, noting that Gilda is duped by the Duke’s advances partly because she has such little understanding of society and relationships.

Later in the opera, even after realizing that the Duke has betrayed her, Gilda sacrifices herself to save his life, an act underscoring both her inability to empathize with her father and to understand the sacredness of her own life.

Wood says part of the problem is Rigoletto’s failure to connect with his daughter emotionally. In addition, his own mean-spirited comments as the Duke’s jester have drawn so much hatred toward him that they also contribute to the tragedy.

And yet, Rigoletto fails to fully acknowledge responsibility for his actions. He blames nature, the hateful courtiers, the Duke, and the old man’s curse for his predicament. Wood notes that none of the characters in the opera accept moral responsibility, although most of them (except the Duke) are aware of their bad actions.

“Rigoletto” has some of opera’s most catchy and hummable tunes, such as “Questa o quella,”“Bella figlia dell’amore,” and “La donne e mobile,” and the Duke gets to sing them. Yet, all of them reveal his corrupt character, immoral behaviour, and contemptuous view of women.

“I think he’s given the best tunes because it shows he has this charm and this wit and just that sense of complete ‘I don’t care’ attitude, and that’s a very attractive trait,” says Wood.

“I think that whatever period you set the production in, however you do it, that’s the important thing–the Duke has to be a magnet for social butterflies to cling to because they desperately want his attention. … They’ll deal with the consequences afterwards, but they want to be in the inner circle,” he says, noting that this is the type of self-interested behaviour that contributes to the circle of abuse in “Rigoletto,” as well as that in society today.

“It’s not just about one man, it’s about how he is allowed to behave in that way, and the consequences are disastrous.”