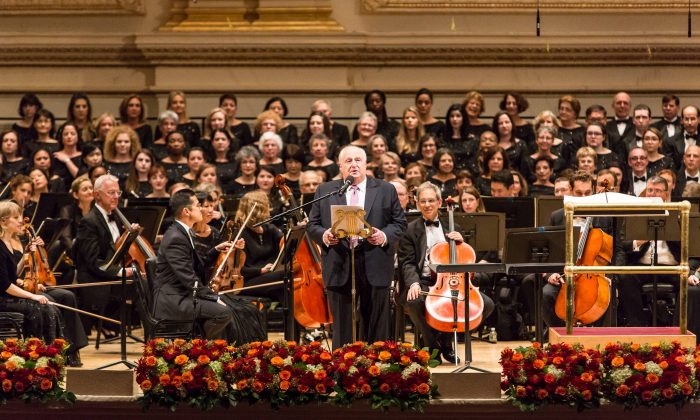 The Richard Tucker Music Foundation Gala is always a must-see for opera fans and this year was no exception.

Richard Tucker (1913-1975) was a great American tenor, a native New Yorker, who remained a star at the Metropolitan Opera until his untimely death from a heart attack.

The Foundation, founded in 1975, is a non-profit organization that gives awards and grants to up and coming opera singers.

The Gala returned to Carnegie Hall, its original home, for the first time in 25 years. Asher Fisch conducted members of the Metropolitan Opera Orchestra along with the New York Choral Society, which was back for its 22nd consecutive year.

The concert opened with the majestic “Entrance of the Guests” from “Tannhauser,” performed by the orchestra and chorus.

The latest winner of the Tucker Award, Tamara Wilson, sang Wagner’s “Dich, teure halle” from the same opera. The soprano has a big voice and, as she continued to demonstrate at various points in the evening, holds enormous promise in different styles of music.

Renée Fleming sang the touching “Adieu, notre petite table” from Massenet’s “Manon” and Leoncavallo’s “Mattinata” (which is usually performed by tenors, starting with the first recorded performance in 1904 by Enrico Caruso with the composer on the piano).

Kristine Opolais sang the haunting “Song to the Moon” from Dvorak’s “Rusalka.” She will play the lead in this opera at the Met in February.  “Un bel di vedremo” from Puccini’s “Madama Butterfly” showed why that opera is another of her acclaimed roles.

That familiar aria was followed by a rarity: “Tu al cui sguardo onnipossente” from Verdi’s “I Due Foscari,” a bel canto piece featuring Tamara Wilson with the women of the chorus.

Two of the leading bel canto tenors, Lawrence Brownlee and Javier Camarena, engaged in a duel of high notes in a duet from Rossini’s rarely performed “Otello.”

Anna Netrebko delivered a wrenching “La mamma morta” from Giordano’s, “Andrea Chenier.” The opera takes place during the French Revolution. In the dramatic aria, Maddalena recounts the murder of her mother in the doorway of her room.

The audience response was so ecstatic that Netrebko returned for an encore: “Ecco: respiro appena … Io son l’umile ancella” from Cilea’s “Adriana Lecouvreur.” The singer portrays a prominent actress, who describes herself as merely the instrument of the playwright. She claims her aim is fidelity to the author’s intention.  Incidentally, both pieces Netrebko sang at the concert appear on her latest CD, “Verismo.”

Her husband, tenor Yusif Eyvazov, who sings on the album, was originally scheduled to appear at the Gala but unfortunately broke his foot.

There was one contemporary piece at the concert: “Si, son io” from Jake Heggie’s “Great Scott,” sung by the star of the premiere, mezzo-soprano Joyce DiDonato. The composer was in the audience and took a bow.

DiDonato and Barton sang the emotional duet, “Son nata a lagrimar,” from Handel’s “Giulio Cesare.” The baroque piece was followed by a bel canto duet from Bellini’s “I puritani” by Sierra and Camarena.

The concert ended with Leonard Bernstein’s “Make our Garden Grow” from “Candide” by Wilson, Guerrero, the New York Choral Singers and the other opera stars joining in.

The Richard Tucker Gala is being webcast for free for 90 days on medici.tv and medici t.v.’s Facebook page.